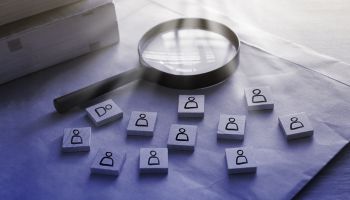 Boston’s $1.1 billion-assets Radius Bank represents the far end of the range of institutions that can be classified as community banks. Not by size, but by nature.

Radius’ roots were in a trade union-owned bank that fell into difficulty and was taken over by an investor group. While the Massachusetts bank’s headquarters are in Boston and it maintains a small branch on the building’s first floor, Radius represents a hybrid. Its funds gathering occurs mostly online, and it engages in a variety of consumer and commercial credit specialties that are national in scope.

While the bank does play a part in its physical community, in many ways Radius serves a digital community. And this has driven a different, almost eclectic, talent search.

For example, about a year ago, the bank hired a chief data officer, Dr. Chip Clarke, formerly of KeyCorp, to head an expanded data-driven effort that encompasses Radius’ data and modeling approaches to fraud, credit, and marketing. With little or no physical contact with customers, data is how Radius understands its clientele and its prospects.

“The models that we build around our data will be among the most valuable parts of this organization,” says Michael Butler, president and CEO.

As head of a digital bank, Butler says he wakes up every morning thinking about Amazon. “Customers today expect that we know them and will treat them in the right way,” he says.

This ongoing awareness informs the bank’s philosophy on recruitment. “We are expanding the net that we cast for recruiting,” explains Chris Tremont, executive vice-president for virtual banking at Radius. 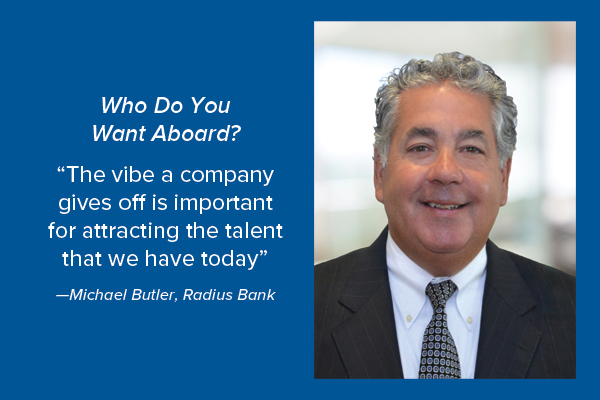 As a result, in addition to bankers, Radius has hired people from TripAdvisor, the online travel site, for a data analytics position; Destination XL, a big and tall menswear firm, for a post in customer experience; and for a customer service supervisor job, someone who had worked in quality control for Wayfair, an online home furniture and décor store.

“The vibe a company gives off is important for attracting the talent that we have today,” maintains Butler. Elements of the Radius vibe, he points out, include flexible hours; a “do well, get paid well” philosophy; and a relaxed dress code, “where you don’t see a bunch of suits.”

Butler adds that Radius doesn’t track vacation time. You take a break when you need one. He confides that as it is, executives are rarely fully away from their jobs wherever they go.