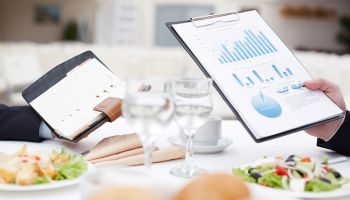 Every bank that I ever worked for expected its lenders to be calling officers. That’s part of the territory and everyone understands that it’s a key part of the job.

At The Bank of New York, as a member of the Metropolitan Lending Division, each of us was expected to make ten calls a week.

And a “call” had a specific meaning. A meeting with a customer in the bank with the exception of lunch in the bank’s dining room didn’t count.

I soon enough learned how to plan visits to customers’ places of business commuting to or from the office and I scheduled a customer or prospect lunch every day. The goal was ambitious, but most of us made our quotas. It also helped that we had a boss who never thought we were spending enough on customer contact and entertainment.

Missing: Any explicit criteria defining what a “good prospect” should be.

As a result, we probably frittered away some time on the wrong sorts of calls. However, the bank also had a strong culture and we all knew as a sixth sense what was expected of us in the long run.

What if your bank doesn’t have that sort of well-defined culture and “sense of itself?”

Decide who you are, and how to sell yourself

Let me describe what I mean by that question.

I found myself in Orlando as the number two officer in a relatively recent de novo affiliate of Southeast Banking Corp., a very large regional banking corporation of its day. We were one of a few smaller banks of Florida-based bank holding companies not headquartered in Orlando and each of us were competing in the shadow of the city’s largest and most prestigious lender, Sun First National Bank, predecessor of the now banking giant Sun Trust Bank.

This was in the days of zero branching in Florida. Every geographical outpost required a separate banking charter and the result was a lot of small banks throughout the state.

I had been transferred into the job from a corporate lending desk at Southeast’s lead bank, one of the largest banks in the southeastern United States. The difference was significant. In Miami, I represented the “top dog.”  In Orlando, we and the other small banks by total individual assets were scratching for crumbs. It was not easy to compete against the prestige and image of Central Florida’s most iconic banking institution.

I think it was in those days that I began to develop a fuller sense of how to compete. Perhaps it was the realization that we had to work smarter and not just harder to survive. In the hindsight of many years, these were the beginnings of a lifelong calling discipline in terms formative habits and techniques.

How to identify your top targets: old school, but good

Here are some time-tested ways I ranked the desirability of each prospect in the absence of financial information in advance.

Often being largely ignorant of the finances of the prospect, not having had access to any non-public financial information, where can a banker start to pick up useful community “intelligence”?

One of my holding company colleagues—in the trust area, actually—taught me to look for a company and its principals’ names in charitable giving acknowledgments by non-profits and United Way. Companies struggling financially are not typically significant philanthropic givers.

And company owners who are publicly honored for significant gifts to non-profits may also be signaling a scope and scale of both business and personal ambition. I had a lively sense of that from my work in Miami. And it’s often an opportunity to engage the prospect in conversations in a key area of personal interest.

2. Don’t underestimate the value of a tour

A tour of the business premises conducted by the owner can be very insightful for all the obvious reasons.

But some of the less obvious ones include indications of the degree of collegiality the owner enjoys with his workers. This is valuable long-term insight into workforce productivity, turnover of staff, and overall experience and skill as a manager. This applies whether you are dealing with a factory or a consulting firm whose major assets go home at night, or which reside as data or analysis on hard drives or in the cloud.

A tour also allows you to gauge the general condition of the company’s fixed assets without having the eye of an auctioneer or equipment dealer. Are the fixed assets and the physical facility well maintained and do they project a prosperous image?

A down at the heels look does not contribute to a positive impression regardless of what the financial statements may show. And maybe a rundown appearance matches the financial condition of the business.

Use some common sense: Does the place look busy? Does there appear to be unused capacity—perhaps too much or, if little or none, is that indicative of a near-term lending opportunity?

An engineering consultant whose business often required him to make cold calls on his prospects told me the absolute best story I can share about getting a tour of a place of business.

He’d drive around to the back of the facility to the loading dock and ask for the president or owner. The usually surprised staffer who greeted him and would then say something like, “Follow me. His office is up front.”  Then my friend would get an unscheduled, unscripted tour of the facility before ever meeting the owner. He told me that often these impressions were of more value than the actual introductory meeting with the principal himself.

For myself, I remember multiple visits to a CEO of a relatively large company in Orlando that had just moved into a beautiful new office building.

Florida has lots of art festivals and during the two-year planning and construction of the building, the CEO acquired artwork to decorate the new building at several of the local art festivals. He had a wonderful eye in his own right but his primary objectives were to create demand for, support, and showcase the work of local and regional artists.

This ultimately created for us opportunities to work with the company in community projects where we could match up community development and CRA activity with the natural interests and instincts of this important prospect who became our customer.

Not every opportunity comes as an obvious request for credit.

How to identify your top targets: 21st tools

The internet has generated many new tools and techniques to enhance a lender’s productivity in his or her calling efforts.

Google searches are the perhaps the best examples of finding specific information on a company’s product lines and technology that were not available to me as a young lender. I could have made a lot of use of Google and Facebook and LinkedIn 30 years ago and I find myself using them frequently today.

The flip side of this is, with iPads and such, no lender has any excuse for going into a prospect or customer office unprepared, unaware of the not only the background, but the latest news about that firm.

The older I grow, the more convinced I have become of the strategic value of a curious mind.

I always had a lot of questions—the why and how of things interested me.

Maybe sometimes it led me up blind alleys. But if nothing else, I felt that it helped demonstrate a more than superficial interest in my prospects’ business and financial opportunities.

The most important thing that any of us as business developers can do is to differentiate ourselves from the competition. At some level, even in that long ago time in Orlando, a business owner would appreciate a genuine and hopefully more than a superficial interest in his business by his banker.

That’s the value added of a curious mind in the business developer. For the bank and the banker, curiosity makes his calling effort better and more productive because it’s the God given way of working smarter and not just harder.

More in this category: « Don’t give leverage risk short shrift Too much information? »
back to top