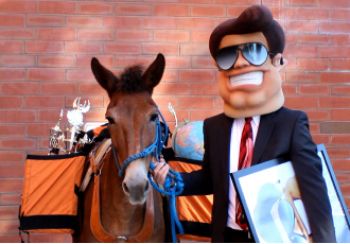 He’s something of a blend of Bill Clinton, Bob’s Big Boy (of the restaurant chain), and a sunglasses-wrapped movie star. He’s become the award-winning mascot of $304.3 million-assets First National Bank of Muscatine, Iowa, and, yet, he literally came out of nowhere a year ago.

One old saw says that money speaks louder than words—but, like Disney characters that roam around Walt Disney World, Cash doesn’t speak at all. The only exception is that Cash, or at least someone tweeting in his name, posts on Twitter for the bank, with his photo as the bank’s Twitter icon (@FNB_Muscatine). Cash appears frequently in photos on the bank’s Facebook page, and often stars in videos on its YouTube channel.

Modesty is not one of Cash’s attributes. But then, he was “born” with a swelled head.

Out of the inbox

Cash, in reality, is an outsize head worn at various events and in ads by one of the bank’s commercial officers, though other staffers have donned the head and clothing appropriate to the day’s occasion when necessary. (One photo on Twitter features Cash waist deep with local swimmers in a pool. He traded his standard business suit for swim trunks that day.)

The thought to go with Cash originated with an earlier campaign that involved outsize caricatures of bank officials’ heads on little cartoon bodies—like banker bobbleheads.

But creation of the Cash character as the bank’s mascot had been brewing for a while. First National management was looking for a friendly, light-hearted symbol that could connect its brand with everyone from children to seniors.

In one video, Cash plays with several baby boys of staffers while the voice-over promotes home equity loans. The message: Borrow to add on when a baby’s arrival creates the need for more space. A similar spot promotes home equity credit when it’s “time for a minivan.” In another spot, with a bank business customer, Cash appears in a tour of a factory, Musco Lighting. He’s also seen pitching and coaching at a softball night game. 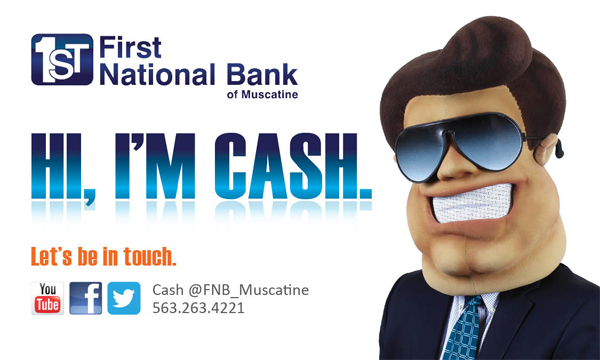 Cash carries his own business card.

Working with Maydwell Mascots, a Canadian firm, staff came up with the look of Cash. “Cash had been rattling around our inboxes for several years,” says Charla Schafer, marketing director. Once they got started, they had fun with it. Cash maintains an office replete with trophies and other mementoes of a storied “career” that includes character references from the Dalai Lama, Ben Bernanke, and Bono. (Read about his amazing life.) Cash has his own business cards and a bank email address.

Cash has become the face of First National, and in this day of social media ubiquity, he’s become a camera-magnet.

“One surprise has been the ‘viral-ness’ of Cash,” says Schafer. People enjoy snapping him at community events like ballgames and homecomings, and they post him on their social media pages. At one community symphony, the conductor lent Cash his baton, and Cash did his own conducting.

“Our employees actually suggest places where Cash can appear now,” points out Kelsey Hodapp, marketing/graphic design specialist. Wherever he appears, Cash gives away 8”-by-10” signed glossies and Cash t-shirts.

“And people like to shoot selfies with him,” adds Hodapp. Cash’s bank office includes Photoshopped grin-and-grabs with celebrities to supplement genuine appearance pictures.

When the bank’s branding campaign competed in the Iowa Bankers Association Best of Iowa awards, it won both a gold in the branding category and the overall best of show award. Cash was there to accept, along with bank staffers.

Moving Cash out of the “inbox” meant the marketing staff had to convince the board to step a bit outside the traditional. “They gave us the latitude to get moving, and we did,” says Schafer. Since then, with the community warming to the outsize character, “the board has indicated that it will support this going forward.”

Many banks send officers or other employees to appear at community events, but First National finds that adding some “character” means even more.

Cash—as in “currency”—sometimes helps Cash make friends for the bank. Cash is the fellow behind contests the bank holds for occasions like Valentine’s Day and high school proms, as well as bank visits to present donation checks. 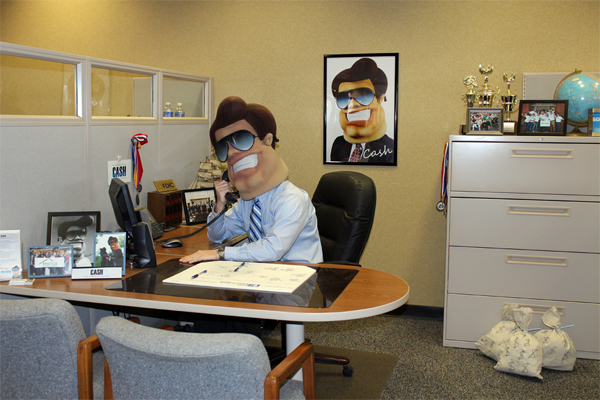 There's always more for a busy banker to do. "Cash" works the phone in his personal office.