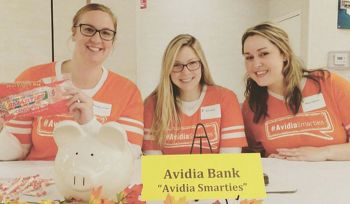 The Avidia Smarties are employee brand ambassadors for Massachusetts’ Avidia Bank. They receive special training to keep things in compliance online while promoting the brand in social media and in person.

You may have been hearing these buzzwords lately, but what does this all mean? And how can it help your bank’s business?

Recently, our community bank, $1.2 billion-assets Avidia Bank, in MetroWest Massachusetts, launched its Brand Ambassador Program. The program has helped grow their community presence and brand awareness. The effort has even helped our employees learn new skills and become experts regarding particular products and services the bank offers.

Why must a local bank go for branding?

Avidia Bank represents a fairly new banking brand in its markets. The bank was created in 2007 when Westborough Savings Bank and Hudson Savings Bank merged. Instead of identifying itself with one region or another, the bank was re-branded as Avidia—short for “Avid Ideas.”

The concept behind that name was management’s desire to seen not only as part of the community but also as the innovative bank that it is, pairing cutting-edge technology paired with classic community bank service.

The next challenge was to create brand awareness. A combination of online radio ads, social media, email marketing, and television helped put the brand out there. In early 2015, the idea was born that Avidia Bank could engage its employees in a social media brand ambassador program to help with initiative.

Hootsuite, a social media management platform that provided training to staff, says that employee networking offers five times as much reach with messages shared by employees compared to traditional marketing channels. Hootsuite says that 92% of an employee’s followers are new to the brand and that there is eight times more engagement with content shared by employees compared to the brand’s business-side social channels.

The first steps were not without challenges. The Marketing Department at Avidia Bank did their research and put policies in motion before proposing the brand ambassador program. This involved writing up a thorough social media policy for all employees and creating a secondary one for the brand ambassadors.

In addition, to prepare for inevitable critics, case studies from other businesses and numbers backing brand ambassador programs were also prepared and presented. For example, according to Edelman’s 2013 Trust Barometer, 41% of people think a company’s employees rank higher in public trust than a firm’s PR department, CEO, and founder alone.

Compliance is a concern for any industry getting into social media, but especially for financial institutions. We took the challenge step by step.

The first step is to create a strong social media policy. There should also be training in place for employees who are going to be engaged in the brand ambassador program. This will include reviewing the social media policy and providing guidance on what to post and what not to post.

All posts from the Avidia Smarties, as we call our ambassadors, go through a filter that regulates their content. We encourage them to be themselves, and to share their experiences, community love, and financial literacy tips.

“Make it personable” is the aim, but if something could be questionable when it comes to compliance, it is filtered out through the Hootsuite platform that Avidia Bank uses.

Suitable and useful content is one of the biggest concerns and this also falls under compliance. Of course the last thing you want is employees giving out rate information that is incorrect or posting an article that is more favorable for your competitors.

Using Hootsuite, the Avidia Smarties have access to a large content library of pre-approved posts that they can use. These include articles and product campaigns that have already been vetted by Compliance. The Avidia Smarties can also submit their own content to be reviewed if they find an article on financial literacy or banking trends that may be helpful.

The leaders of the team, known as the #ExecutiveSmarties, hand-selected additional employees to join in as an Avidia Smartie. These employees were ones that were known to be savvy with social media and technology.

After an application review, thorough interview, background check (no bathroom selfies please!), and the signing of the Avidia Smartie contract, they become an official Avidia Smartie. They are given their Twitter handle, training, and an orange Smartie shirt. We send them out on their mission to share #CommunityLove and #FinancialLiteracy in their own #LiveSmartBankSmart way.

The Smarties has a special team member, known as Max McNickel, or @BankSmartMax. He’s a white piggy bank that travels with the Avidia Smarties to events and shares some of his own adventures on his Twitter and Instagram pages. People love the mascot, Avidia’s answer to the Geico Gecko and the Pillsbury Doughboy.

Why be a brand advocate?

Advocacy marketing not only helps your business have a better reach, but also inspires employees to engage more and makes them feel more satisfied with their job and company. In a recent Global Workplace Gallup study, researchers found that 20% of employees who are engaged in their brand socially are more likely to stay at their workplace. Also, 20% are more likely to feel inspired and 15% feel more connected to coworkers beyond their core teams. What is even better is to hear that 27 % are more likely to feel optimistic about their company’s future.

Education is another benefit the Avidia Smarties receive. We have enrolled them in the Hootsuite University program, which they have all completed. They can add this certification to their resume and LinkedIn profile. This training provides a grounding in best practices to the Avidia Smarties in regard to post frequency, when to post, how to write a call to action, and other helpful tips.

In addition to inspiring employees, the Avidia Smarties are empowered to become thought leaders at Avidia Bank and in the overall financial industry. They have provided insights into product releases, app enhancements, and marketing efforts. 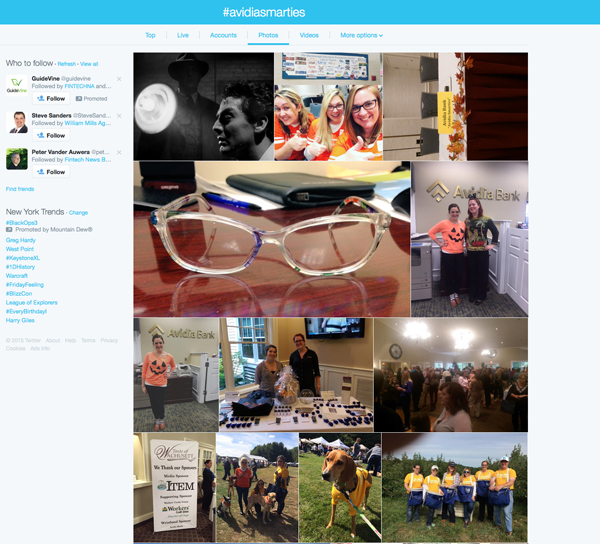 Because the Avidia Smarties come from a variety of departments, it also makes it easier to manage the brand pages for Avidia Bank. For example, if a question comes in to the Avidia Bank Facebook page regarding payments, it can be assigned to the person who works in the payments field to follow up and respond appropriately. The customer on the other end of that conversation is receiving personalized attention directly from the expert.

How Smarties choose their tools

Each Avidia Smartie has their preferred networks. Some enjoy Facebook more than Twitter. Others favor Instagram. We allow them to use whichever network they are most comfortable on and will have the biggest impact on.

The Avidia Smarties also do a lot on Periscope, which is livestreaming on Twitter.

This has been particularly effective when Avidia Bank launched #CardlessCash, an enhancement to the Avidia Mobile App. In preparation for this launch, the Avidia Smarties posted teasers and talked about their testing experiences with the enhancement.

Once the enhancement was released, the Smarties used Periscope to demonstrate how it works and to answer any questions from viewers. Viewers were very engaged and had a many good questions regarding how #CardlessCash works and where it is available. 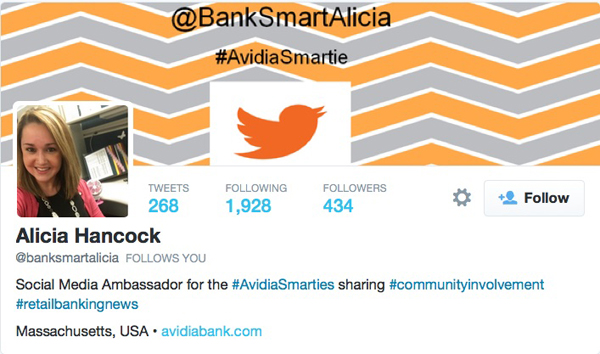 Since the Avidia Smarties began only a few short months ago, their presence in the community has grown significantly. They are connecting with over 3,500 people on Facebook, Twitter, and Instagram. This provides an exponential reach for the bank and engagement with the community.

Because Avidia Bank is a community bank, the Avidia Smarties have become a fixture at community events. They have also volunteered for #HungerActionMonth where they partnered with the Community Harvest Project and volunteered to pick fresh apples for the Worcester Community Food Bank. Local businesses and their community are important so you may catch the Avidia Smarties at a #SmartieSwarm, where they will meet up at a local business to create a social media buzz!

Demand for the Avidia Smarties to attend community events has increased. They have even received phone calls from people who want to hire them to help share their own events on social media, hand out swag bags, or to attend an event they are hosting.

From the first event, which was a Community Festival that included an Instagram contest to being instrumental in the launch of Avidia Mobile’s Cardless Cash app enhancement, it’s clear the impact has been great.

Of course, there’s much more to measuring social media success than counting followers and such. Using analytics from the social media networks, this impact can be measured and tracked. We also look at engagement and brand recognition. Each week, our marketing team reviews the analytics reports from not only the bank’s own brand pages but also the reach from the Avidia Smarties. They look at sentiment, reach, engagement, and clicks to the Avidia Bank website.

As these are analyzed, we can advise the Avidia Smarties regarding what content they’ve posted has had the highest impact.

The Avidia Smarties are managed by the Executive Smarties, who create initiatives, run training sessions, and keep a calendar of events. The Avidia Smarties meet once a month to review past events, upcoming events, and brainstorm about new ways to engage with their communities both on and offline.

Twice a month, a Smartie Update is emailed out to the group that may include helpful webinars, tips for managing their posts, and notice of additions to the content library.

What’s next for Smarties?

Technology and social media move so fast so the Avidia Smarties have to keep up. There are some new additions the Avidia Smarties plan to implement in 2016 that include guest blogging opportunities and more live streaming using platforms like Periscope or Blab.

More educational opportunities will also be available to the Smarties. And current Smarties will also be preparing training for employees who are not currently in the program. Because social media is such a powerful tool for businesses, they will be providing internal training available to all Avidia Bank employees on creating and managing a personal brand online. Through this, the Avidia Smarties also hope to grow their team in 2016.

One thing is for sure, the Avidia Smarties team has helped Avidia Bank continue to be the innovative bank and community partner they are known for, but now a many more people know about it.

Katelin Cwieka is a marketing specialist at Avidia Bank.

More in this category: « #Retweet the #CFPB Finding social success »
back to top