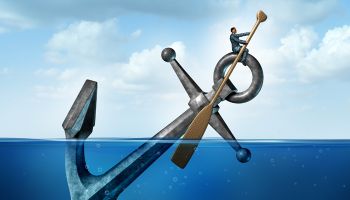 “Busy but not efficient.” Does that describe your bank? Six diseases likely lie behind this syndrome that’s slowing you down. Good news: It’s not an incurable condition.

How did we arrive at a point where it takes over 30 minutes to open a new account, and where paper and manual processes litter our banks?

Short answer: We didn’t need to be that efficient in the past, so we didn’t focus on it.

Interest margins were strong, regulators were relatively passive about process, and there really weren’t any outside competitors vying for a slice of the pie. Well, that world has changed.

And banks need to stop the bleeding.

Shocking symptoms—and the diseases behind them

Here are four statistics that will blow your mind:

1. 75% of time spent with new customers involves computer input, versus building relationships through a conversation.

3. 60% of financial institutions still use a paper-based new-accounts process.

These results are symptomatic of the problems the banking industry faces.

They will need to be tackled head on by implementing a culture of accountability—curing the diseases that cause inefficiency.

Cornerstone has identified four key diseases that all banks should avoid. These diseases create many of the inefficiencies that lead to poor performance and create busy work that adds no value. In brief they are "Control patrol" disease; "Frankenstein" disease; "Double double data" disease; and "Do-over" disease. They appear below and can also be seen in this infographic.

• Cost of controls > cost of abuse

• Separate processes for the 10% exceptions

• Same data rekeyed over and over

• Completed work has to be reworked

• The same work is done more than once

Now, let’s tie these diseases to the four statistics that were discussed earlier on:

1. Bankers spend 75% of the time during the new customer/account process on the computer, versus building relationships.

• Double double data disease. The biggest reason for spending so much time on the computer is related to a lack of system integration.

Systems like chexsystems, check order, credit reports, debit card, and online banking enrollment require reentry at many banks, because vendors haven’t made clients aware of integration or banks don’t feel they should pay for it.

By going cheap or getting lazy, bankers often subject customers and employees to unnecessary pain and suffering. And it’s a waste of time.

Many bankers are accountant-analyst types, who pride themselves on squeezing pennies, but this is one area where going cheap costs the bank more and leads to a lot of unintended consequences.

Frankly, vendors should price the integration of new account systems into their base products and not make it optional.

But I don’t see this changing anytime soon.

Vendors tout “integrated workflow” in their systems. While that sounds great, most don’t have system capabilities that allow for dynamic workflows to be customized by product. Lack of integrated sales tools also adds to the frustration.

• Control patrol disease. The risk pendulum has swung too far. This often leads to requirements like signatures for every transaction, which creates paper and then creates manual processes and checkers checking checkers.

Other examples include: supporting bank’s Customer Identification Program requirements that go overboard, like requiring a paper Social Security card or risk rating of consumer accounts in the branches. It could stem from an overreaction to a regulator or an overzealous compliance employee with too much power.

2. Over 50% of commercial banks still manually originate commercial loans via point solutions that are typically not integrated.

• Do-over disease. Loan officers are typically sales-driven, rather than process-driven, individuals. Because their pay is typically tied to production, they do whatever it takes to get deals done. Automation conflicts with their “scream-the-loudest” technique that has worked for years.

• Frankenstein disease. Many banks have allowed loan officers a creative license to reinvent the wheel for every deal, so terms can get very complicated and exceptions are the rule.

• Do-over disease. Technology and lack of understanding are to blame most times.

Many platform applications haven’t been upgraded, or financial institutions aren’t aware of functionality that’s available to them. Because many vendors have punted here and rely on third parties that cause the process to be cumbersome, banks often view improvement as not worth the hassle.

4. Over 70% of statements are still printed and sent via mail.

For example: not designing a statement product with features or fees encouraging customers to switch to electronic statements. (This and the following disease are not among the “big four,” illustrated above, but they do affect processes.)

• Greedy vendor disease. Vendors want a piece of the pie and charge more than they should for sending customer notifications and housing the statements. Often, e-statements can be almost as expensive as traditional ones, as vendors charge per page, per statement, etc.

Now, let’s look at some of the cures for these diseases as well as the process inefficiencies that they create.

Let’s begin with a key point: You can’t manage what you can’t measure.

All banks want to be more efficient, yet many departments don’t have the right data to measure how they’re operating, which is the first step in gauging efficiency.

While the final score is important (ROA, efficiency ratio, etc.), understanding what’s behind the score and making improvements are where high performers spend their time.

Successful sports teams, like the Ohio State Buckeyes, win for a reason. They constantly look to improve. After a game, you can bet they study film and practice harder than ever.

As banks look to develop an accountability culture and implement departmental metrics/scorecards, following these six best practices will help:

Every department should be working with three to seven (not 20) easy-to-track metrics. Too much detail can cause confusion and create more work than it is worth.

For example, tracking the average time that customers wait in line in branches is next to impossible. But tracking call center hold times is easier and the data likely already exists in a report. Note that time and motion studies are typically a waste of time and too detailed. Stick to easily attainable measures.

A mix of profitability, customer service, and risk benchmarks provides a good balance and should be factored into each business unit’s scorecard. For instance, a contact center agent can take 100 calls a day but not be effective, because of long hold times or abandonment rates. The same methodology applies across all business lines. It’s impossible to be a high performer in every benchmark, because of this balanced approach.

Setting goals is more art than science. While it is important to know what peer banks are doing, it is more important to align benchmark targets to your bank’s strategic plan and mission.

One of the best practices is not to take a top-down approach. Rather, allow managers to plead their cases on appropriate goals and debate them. As a bank begins to set goals, it can expect to hear excuses as to why some goals may be unattainable.

The following circumstances should be kept in mind when setting goals:

• Small branches will typically underperform peers as the minimum staff needed from a security perspective does not match the transactions and/or new accounts opened. Many banks have gone to a universal employee model and shared branch manager duties to increase efficiencies in these situations.

• Scale can affect support groups, such as technology, ERM, accounting/finance, human resources, marketing, and operations. A bank that is below $500 million in assets should not expect to perform as well as a $5 billion-plus bank.

• Updating goals is ongoing. Benchmark targets should be tweaked over time as the bank’s business model evolves and the benchmarking culture matures. Senior leadership must understand the targets and agree with the methodology that managers use to establish them.

Once a scorecard has been built and goals are set, it is time to monitor performance and use this information to manage the bank. Call center and branch metrics can be measured and reported daily. Other metrics, such as for the back office, are more likely to be measured on a monthly or quarterly basis as ebbs and flows can occur.

The following design principles can assist in the establishment of an effective performance dashboard:

• Measurements should always be shown against both a goal and a historical comparison, such as what the bank did last quarter or last year. Understanding trends can help identify issues before they become real problems.

• Goals should be tied to performance incentives for both the front- and back-office functions.

• Automation will save this effort from being a one-time process. Dashboards/intranet technologies are a bank’s best friends. Also, a strong data warehouse will prove useful as data will need to be gathered from systems such as core, loan origination, teller, and general ledger.

(The chart on at the end of this article is an example of a few of the areas represented on a bank’s dashboard.)

As a bank reviews its results (especially trends over time), it should look at outliers, including high and low performers within an area, and determine reasons for differences.

Sometimes, variances can be the result of a personnel issue, but usually there are explainable reasons like training, manager challenges, and technology issues. Identifying outliers is as important for sales functions, such as investment brokers and mortgage loan officers, as it is for branches and other FTE-based metrics, where individual performance can be tracked.

In the short term, every bank should solve the four challenges discussed earlier, and begin to instill accountability in managers by implementing a numbers-based culture.

A key to success when tackling the diseases outlined is to not take on too much at once. Experience has shown that dividing larger, complex projects into shorter-term quick hits is the way to go to increase your odds of success.

Eric Weikart is managing director at Cornerstone Advisors and can be reached at [email protected] Portions of this article were originally published on Gonzobanker.com 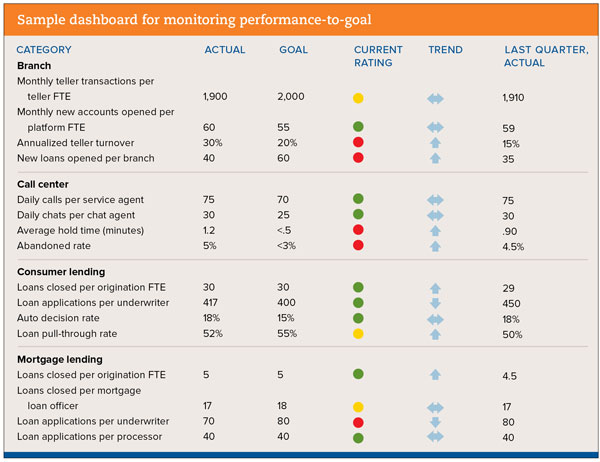