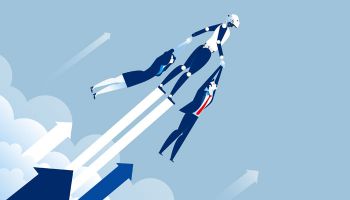 Not long ago, Indiana’s Peoples Bank SB had a business prospect come in who had a loan with Kabbage, the online lender, at 20%. “We reviewed their credit, and we got them into the bank at close to 5%,” says Benjamin Bochnowski, president and CEO at the $914.2 million-assets bank.

With credit that was worthy of a rate like that, the bank asked the customer why it had gone to Kabbage in the first place—and been willing to pay nearly 15 percentage points more for credit. Simple, the new customer responded. Kabbage was easy to use and delivered the proceeds of the loan quickly.

“We’ve got to get better at that,” says Bochnowski, if that’s what convenience is worth to business customers.

Actually, refinancing marketplace lender business loans for business borrowers with good credit is turning into a bit of a cottage industry for banks, according to Trevor Dryer, cofounder and CEO at Mirador, a fintech firm that sets up online business lending platforms for banks.

They just about have to do this, he adds. Dryer has found that some regional banks say that as much as one-third of their existing small business customers have loans with Kabbage and its online brethren. Mirador expects growing adoption in the year ahead, with marketplace lending’s threat becoming more apparent to mainstream lenders.

Technology has been an equalizer for community banks in recent decades. Tech still plays this role, but simultaneously it also can be a competitive challenge in the form of fintech-based rivals.

For Howard Jaffe, president and COO of $1 billion-assets Inland Bancorp in Oak Brook, Ill., there’s been a two-part fintech wake-up call. This prodded him to begin attending the annual Finovate meetings in New York—he’s been to three so far—to get up to speed on the latest fintech offerings.

What first caught veteran community banker Jaffe’s attention was the proliferation of new ways for people to pay. These began to grow right after the financial crisis, when most parts of the traditional banking industry were concentrating on survival and rebuilding, says Jaffe.

The second part of his awakening was the significant speedup in technological change. Jaffe says that historically banking tech seemed to require an upgrade every seven years. Suddenly, significant changes in bank tech seem to arrive every two years. Banks must be ready to spend more—and more frequently.

Community banks face challenges in technology that larger banks don’t, which we’ll come to. But Jaffe says a key point is that after you get a wake-up call, don’t panic, but consider carefully what you are trying to accomplish. In other words, think strategically, not reactively.

“I don’t think this is something you can rush into,” says Jaffe, “but at the same time, it’s essential that you get moving.”

Fintech players come in at least two varieties now: disrupters who want to steal banks’ lunch, and potential partners who want to help banks make lunch (and some in between). Even among these players, the variety is huge.

Partnering can be a good choice, says Jaffe, “but before you go down that path, you have to figure out what you want to accomplish. There is a plethora of alternatives out there to help you get that done.” Jaffe says the range of choice resembles searching for an app for your smartphone—there’s lots and lots of variation on nearly any theme.

“It’s a much shorter time frame,” maintains Jaffe, “and you are always going to be reinventing yourself.”

Increasingly, in the fintech age, competition, the growing irrelevance of geography, as well as greater customer awareness of what is available will be driving things.

“You have to go out and learn to understand the customer and understand their needs,” says Mark Moroz, director of deposits, Live Oak Banking Company. The $2.3 billion-assets bank serves over a dozen small business verticals. One common need is the means to easily take their own customer payments and turn them into usable cash as quickly as possible, he points out.

At the end of the day, most community banks exist to provide a return to shareholders—not be a bet for venture capitalists. So then every new technology must be considered in the context of what will provide revenue.

The chief information officer of one mid-sized community bank says technology facilitates success, but is not the end in itself. His management, he says, is looking for direct impact to the bank’s revenue from new technologies.

As an example, the banker cites ITMs—interactive teller machines linking a remote customer to centralized human tellers. Ideally, a new piece of hardware like an ITM should be saving costs or adding to profit. He doesn’t see either from this tech right now.

“Technology is an enabler,” says this banker. “What’s going to make a difference to the economic performance and to the experience of customers?”

Community banks need to keep an eye not only on what’s going on in the financial world and what they must do to remain current, but also on what their own customers are asking for.

Bochnowski says Peoples Bank regularly surveys its customers, seeking input on their “pain points.” He notes that in spite of all the new technology out there, something Peoples frequently hears about is “not having enough ATMs.” ATMs recently passed the half-century mark as a basic technology.

These bankers’ comments touch on a key point setting community banks apart from larger institutions as the future of digital banking unfolds.

In a recent guest post on BankingExchange.com, fintech expert Chris Skinner criticized banks that don’t “get” the implications of the digital revolution. In “Doing Digital Isn’t Equal to Being Digital,” Skinner wrote that many institutions adopt a mobile app and take similar steps, but they are overlaying the tech on the same bank. For Skinner, reinventing the underlying bank in a digital mold is where the future lies.

That’s not what community bankers seem to be thinking about.

“I don’t want a community bank to be completely digital,” says Trey Maust, copresident and CEO at $181.6 million-assets Lewis & Clark Bank in Portland, Ore. “We have to continue to bring the relationship to the table.”

Maust favors increasing the digital component of community banking, but he says that many aspects of digital aren’t sufficiently mature yet to become the primary transactional channel for his bank.

This isn’t a one-sided decision being made by a provider industry. Bochnowski says of his bank’s customers that “regardless of the delivery channel, there is a strong expectation of personalized customer service.” He says that while community banking’s tools will change, the service that many customers expect should not.

“The mantra I preach a lot is that as a community bank, technology will enhance the customer relationship,” says Bochnowski, “but it won’t replace it.”

Community bankers say they face a balancing act in moving forward with digital technology. There is an urge to “hang with the cool kids.” But that has to be resisted. “We get bombarded with the latest shiny whistle,” says Bochnowski. “We have to think about what will really serve our customers.”

Outright acquisitions of innovative fintech firms aren’t likely for most community banks. Even where partnerships look promising, there’s a process of evaluation there, too, says Maust.

“You can’t just snap your fingers and bring in something new,” he adds. “We have only so much human bandwidth, so we have to be certain about a new technology. Is it a viable product, or is it just hype?”

Much of what is currently hot, he says, isn’t really mature. For an organization like Lewis & Clark, the fruit has to be close to ripe before it makes sense to engage.

“We can’t be guinea pigs,” says Maust. “But we do have the advantage of being nimble.”

That agility can come into play once strategy and the merits of a new technology coincide. Hence, among community bankers who are attuned to new tech possibilities, you hear the aspiration to be “fast followers” a good deal.

While this comes somewhat from the resource challenge, Bochnowski allows that part of that policy, for his bank, is a matter of reputation risk. “If you go with a technology that doesn’t work,” he explains, “customers are going to think that it [and your bank] didn’t solve
their problems.”

Community banks and bankers live more closely to their customers than do employees of large bank innovation labs. “Fast failure,” a philosophy for fintech development, plays better in a fintech lab—not when an irate customer is sitting on the other side of your desk.

“Customers are looking to solve problems in their lives,” says Bochnowski.

Live Oak’s Moroz says that for small business owners, time is a precious resource. When they look for banking, they aren’t looking for “banking,” but solutions to help them with issues like time management.

One issue is remote deposit capture. Full-size scanners take up space, are costly, and often have issues with customers’ web browsers, according to Moroz. Mobile remote capture is popular, but Moroz says small business customers need something beefier. The bank has been working with Ensenta, a provider of financial services application program interfaces (API), and now offers mobile capture that allows the small business customer to capture and put through multiple items in batches.

“Creating a nimble experience equivalent to a branch without the customer needing to get to a branch is very attractive,” says Louise Steller, vice-president of product strategy at Ensenta.

As faster payments technologies come on stream, Moroz sees such tech playing to the needs of these customers and will look to APIs to help the bank make it happen.

The rollout of Zelle, the banking industry version of person-to-person payments, is of large interest to community banks. Zelle won’t necessarily be the name consumers know, as banks do their own branding, says Bochnowski, but “they will know that their payments work better.”

Bankers note that getting on board with Zelle underscores an issue for many community banks—they must wait for their core processors to be ready with the service and have their turn.

Over the horizon: hard work

For many bank customers, apropos of Bochnowski’s comment about Zelle, what they use may not have a label on it that says “new” or “wow” like consumer electronics do. They will just know that something works better, faster, and more reliably. Bochnowski notes that much of the fintech his own bank has adopted in recent months has been implemented behind the scenes to improve existing processes and services.

Indeed, much of what community banks adopt will likely be behind the scenes.

Based on several comments we heard, a major concern is improving a bank’s customer relationship management systems. Part of the challenge of making such systems work is coordination of origination systems and core systems with CRM systems and analytics.

Community bank CIOs will be wrestling with nitty-gritty issues like that—and putting out fires like cybersecurity risks—far from the cool kids and the venture capitalists.