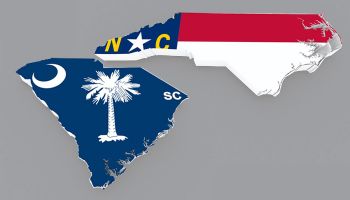 Banks in the Carolinas are still battling for what loans they can find, but there are signs that the economic recovery is finally taking hold and could offer organic growth opportunities in the not-too-distant-future.

A number of banks based in the Carolinas have managed to grow their balance sheets at impressive rates over the last few years, though much of that growth has come through acquisitions. Organic growth has proved far harder to come by during the recession, which hit the economies of North Carolina and South Carolina harder than many other states. 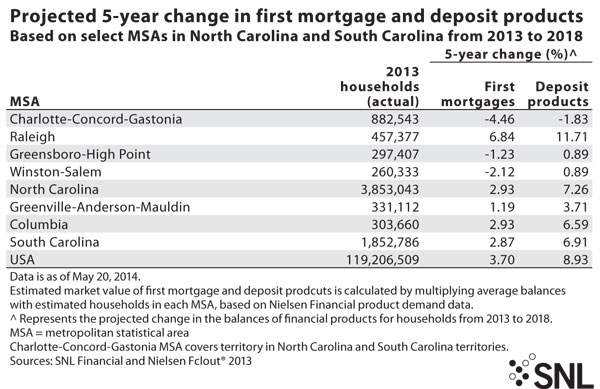 The more severe downturn was evident in the credit quality of banks in the Carolinas, which reported higher levels of nonaccrual loans than the rest of the nation through most of the credit cycle.

Those levels have come down in the last two years, though, and now are nearly in line with the rest of the country as the two states' economies and real estate markets have improved.

Buoyed by business expansion activity in Charleston, S.C., and in its upstate market, South Carolina bounced back from the depths of the recession more quickly than the rest of the U.S. The recovery came slower in North Carolina, but finally took hold in the second half of 2013, with metro markets in the Tar Heel state leading the way, according to Wells Fargo Senior Economist Mark Vitner.

"South Carolina's economy recovered faster than North Carolina because they landed a boatload of major economic development projects early in the cycle," Vitner said in an email. "Up until recently, North Carolina's recovery has largely been limited to the Charlotte and Raleigh-Durham areas. These two regions have accounted for close to 70% of the jobs added in the state since employment bottomed out around four years ago. Both areas have seen employment surpass their pre-recession level."

Vitner said that South Carolina received a boost from the expansion of Boeing's operations in Charleston, S.C., and the construction of new and expanded tire manufacturing plants for Bridgestone in Aiken, S.C.; Continental in Sumter, S.C.; and Michelin in a number of locations around the state. He said that BMW has also expanded its output in South Carolina, and the construction of an inland port in the upstate market is a key piece of infrastructure that will allow BMW to grow even more.

Growth in North Carolina, meanwhile, has come from the influx of new industry and expansions of existing firms, he said. He said that Raleigh-Durham, N.C., has seen software development, mobile communications, and life sciences leading the way, while local employers in Charlotte, N.C., have increased hiring of software engineers and web specialists to support the online aspects of their business. The financial sector in metro Charlotte has also battled back from a deep slump, with increased hiring in asset management and investment banking, he said. 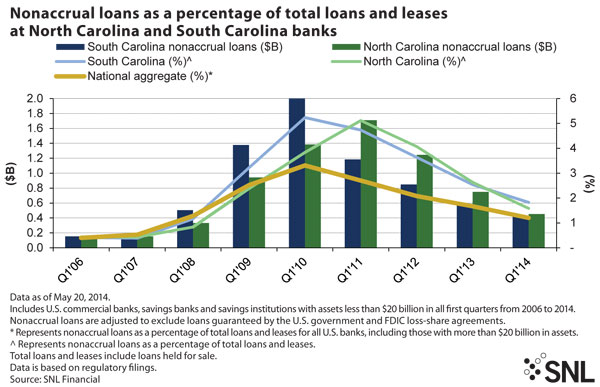 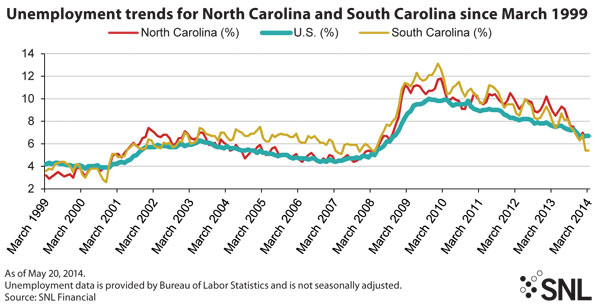 South Carolina's recovery has been far swifter, and even faster than the rest of the country. Vitner said in a report in the fall of 2013 that South Carolina's real GDP growth had exceeded the nation's growth slightly in each of the last three years, largely due to "outsized" gains in the durable goods sector. The state's unemployment rate has dropped substantially in recent years, falling to 5.3% in April from 7.9% a year earlier.

The current level stands in stark contrast to two years ago, when the unemployment rate was 9.2% and has fallen substantially from the recent peak unemployment rate of 11.9% in December 2009. Most of the job growth in South Carolina over the last year has come in the leisure and hospitality and construction sectors, according to the Bureau of Labor Statistics.

Vitner noted in a mid-February report that home prices in South Carolina had risen 7.6% over the last year and stood at levels closer to their pre-recession peak than the national average. Home prices have continued to rise in South Carolina in 2014, with the median sales prices of homes climbing 3.7% through March, according to the South Carolina Department of Commerce.

The recovery in the Carolinas and seeds of future growth are certainly encouraging for institutions operating in the states, but banks still say that loan growth remains hard to come by and competition for loans continues to be fierce.

Robert Hill, Jr., CEO of Columbia, S.C.-based First Financial Holdings Inc., said in late April on the company's first-quarter earnings call that many banks have so much liquidity on their balance sheets that they are trying to put funds to work at "any cost," creating a competitive environment from a pricing perspective. Hill, whose company operates close to 100 branches across South Carolina and has a smaller presence in the metro Charlotte market, said that banks are even more competitive in structuring loans, offering borrowers long-term fixed rates on credits.

"We're seeing some do some 10-year, 15-year fixed-rate financing, and we're just not playing much in that arena," Hill said on the call, according to the transcript.

Park Sterling Corp. told a similar story on its first-quarter earnings call in late April. David Gaines, executive vice president and CFO of the Charlotte-based bank, said that banks are "really, really desperate" for loan growth. He said Park Sterling is trying to avoid making loans with fixed rates given the prospect of rising interest rates in the future and is willing to trade margin to originate floating-rate product.

A handful of banks operating in the Carolinas have said that competition has caused them to walk away from new business. For instance, Capital Bank Financial Corp., which expanded rapidly through a series of failed bank and whole bank acquisitions, has let much of its acquired business run off due to competition, according to its Chairman and CEO Roger Taylor. Capital Bank has fairly extensive operations in Tennessee and Florida, but also has more than 60 branches and $2.0 billion in deposits in the Carolinas. Taylor said on the company's first-quarter earnings call in mid-April that the battle for loans remains very competitive.

"My own view of that is we compete on our bases and what we are seeing is a lot of request for extending maturities, particularly longer-term loans," Taylor said on the call, according to the transcript.

Banks still see growth opportunities coming ahead and are building their operations by hiring bankers in certain areas of the Carolinas, with banks like Park Sterling, United Community Banks Inc. and others touting the recent hires of bankers in markets such as Greenville, S.C., and Charlotte. 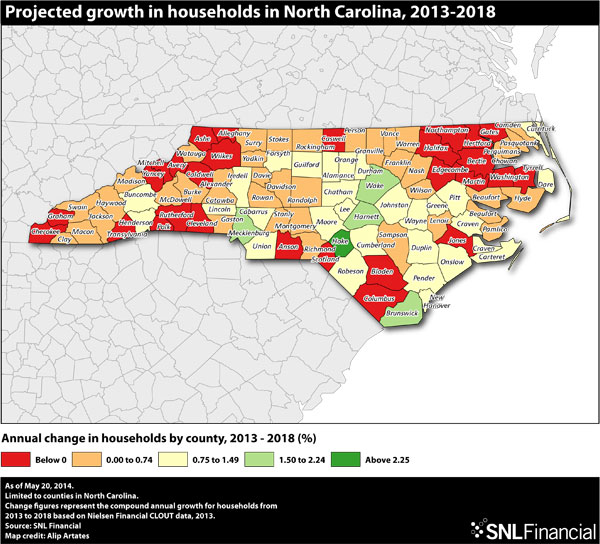 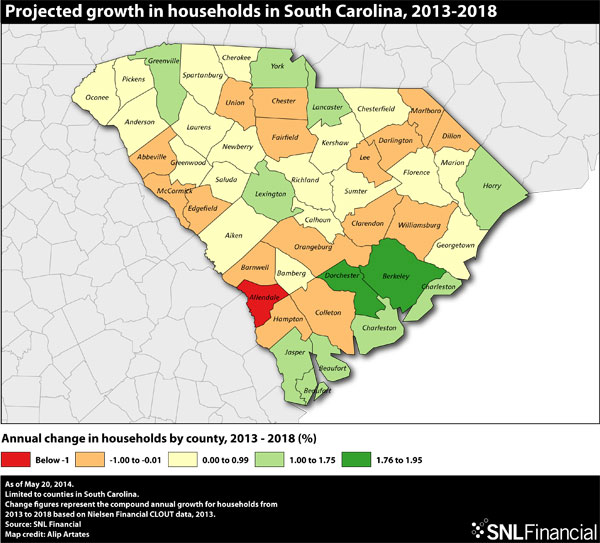