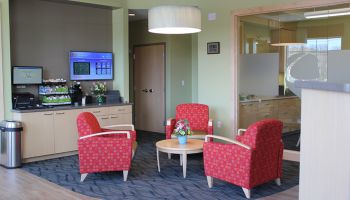 Sitting area and internet coffee bar with video display fill one part of the Claremont Savings’ “small-footprint” branch. Private room behind the glass has videoconferencing set-up.

Claremont, N.H., named for the English country estate of the Earl of Clare, has seen its share of ups and downs. Riding along with it since 1907 has been Claremont Savings Bank, the town’s only independent financial institution.

A recent economic setback provided an opportunity for the bank to try out a new branch concept. The bank had a branch in a part of town that saw several small manufacturers either close up shop or move several years ago. Branch traffic trended steadily down to the point where the branch was no longer viable, according to Brenda Reed, senior vice-president of retail services.

The bank decided to close the branch and open a new one just over a mile away in an area with much higher road traffic. It leased space in a building housing, and owned by, a Dunkin’ Donuts franchise. Reed says this gave the bank an opportunity to try out its first small, nontraditional branch.

Reed and a fellow officer had seen some new branch technology demonstrated at a conference, including in-lobby-teller (ILT) machines that could accommodate two-way video. The $350 million-assets mutual already had a ten-person call center, and some of its staff could be trained to handle the video. A visit to a Vermont credit union’s small-footprint branch provided some other ideas, and management decided to move forward.

The new branch opened in 2015 at just 1,500 sq. ft. with two (occasionally three) employees trained as universal associates—another first for the bank. A Diebold ILT unit was installed with “concierge video.” The new open-format branch also has an internet café with an iPad available for customer use, and two-way videoconferencing set up in a private room where customers can “meet” with off-site loan officers.

The results, overall, says Reed, have been positive and she believes that any future branches will follow this pattern. Some existing branches may be remodeled along this line as well, although the bank has no definite plans for either at present.

The bank has received many compliments on the new branch, Reed notes. Transaction volume currently runs about 3,500 per month with a human teller—the branch retains one traditional teller station—and 2,200 per month through the ILT.

The idea behind the ILT was to provide universal associates more time to cross-sell and provide other non-transactional service, notes Reed, but “people still like to use a teller.”

Many factors can impact branch success. In this case, says Reed, branch traffic may be inhibited by confusion over the two companies’ logos, and some people simply don’t notice the branch. Also, there is no room for a drive-up window, and people have mentioned to Reed that they don’t stop at that branch because of that.

The concierge video has been a disappointment thus far, Reed admits. During the day, people tend to use the bank’s on-site staff rather than the live video. There were some early technical problems as well. The bank created two YouTube videos to promote the service, but it’s simply not used very much, and Reed says she isn’t sure if she would choose the technology again. She says the ILTs have otherwise been a success, however. 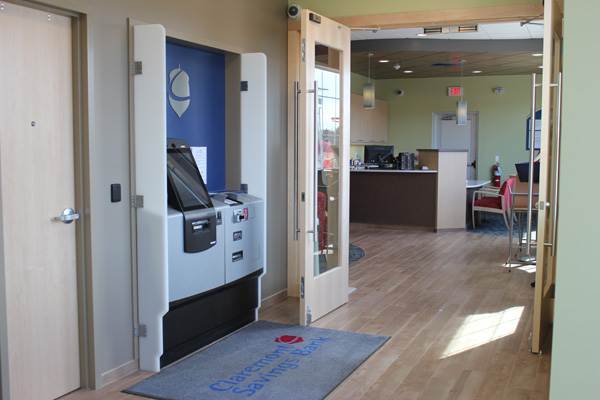 Diebold in-lobby-teller machine sits at entrance to Claremont Savings Bank’s new 1,500 sq. ft. office. ILT features two-way video, but so far most people prefer turning to one of the two universal associates. Single teller station is seen through the doors.

Overall, Reed says Claremont Savings recognizes that technology is the future of banking.

“You have to have all the electronic services for your customers,” she observes. “It’s not even an age thing—we have older customers who like the technology as well.” As the experience with the new small branch shows, however, people still gravitate to places where there are people. So Reed believes branches are still needed, but on a much smaller scale. “We’re not going to see huge banks built again.”

“We’re trying to satisfy both,” she adds. “For smaller community banks, that’s the trend.”

Claremont Savings has kept up, offering online banking in 2000, mobile banking in 2013, and live chat last fall. This July it rolled out online deposit account opening to complement online consumer loan applications. Reed says she isn’t sure about mobile account enrollment, but is open to exploring it.

“We’re very pleased with them,” says Reed, noting that two months in, the bank has already added 800 new accounts, without any advertising.

Overall, online and mobile transactions are growing most quickly, among the bank’s various channels, although call center traffic is still strong at about 7,500 calls per month. Curiously Reed says that the bank’s voice-response number (separate from the call center, which is “live response” only) has not gone down.

Like many community banks, Claremont Savings has been making these changes based on what the competition is offering, and also on informal feedback from customers.

“Our people are out at events talking to customers all the time and listening to things that would make their lives easier,” says Reed.

Though Claremont has a dominant 65% deposit market share, it feels the pressure from big banks in its market (regional Citizens Financial Corp. is one), along with larger community banks in neighboring markets, plus Walmart and its lineup of card, savings, and credit products.

“We have to figure out ways to grow,” says Reed. “Technology is expensive,” she says. “There is no two ways about it.” She adds, with a chuckle, “It’s a very entertaining balancing act to keep your costs [in line] but be able to provide services and find the best thing for your community in your niche.” Still, through a combination of its own initiatives and careful selection of technology partners, the 109-year-old mutual savings bank continues to keep pace.