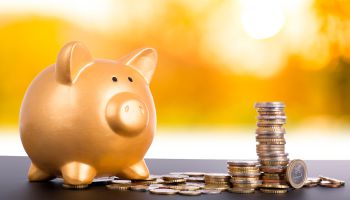 U.S. community bank margins are poised to expand over the next few years, buoyed by a more favorable outlook for credit quality.

The rising interest rate environment will mean sustained expansion in community banks' net interest margins and push returns on equity to the highest level since before the credit crisis. Community bank performance should be supported by continued strength in asset quality, with the credit cycle showing signs that it might have even longer legs than previously expected, according to S&P Global Market Intelligence's inaugural U.S. Community Bank Market Report.

Community banks' earnings are expected to grow 5.5% in 2017 and 10.3% in 2018, driven by 19 basis points of margin expansion over the next two years. Higher margins will come as credit costs only rise modestly.

Fears of a recession have abated since a year ago when plunging commodity prices and a possible global slowdown clouded the economic outlook.

Central banks across the globe responded by implementing negative interest rates hoping to spur growth, pushing long-term rates lower in the U.S. Some bank observers were concerned that falling oil prices would spark delinquencies for community banks in the oil patch if contagion spread from the energy sector to commercial real estate and consumer credits.

Bank regulators continued to express caution later in 2016, flagging easing underwriting practices across a number of asset classes. The OCC and other regulators paid greater attention to CRE concentrations over the last year as well, sounding a warning due to historical low capitalization rates and rising property values in many markets. Late in 2015, regulators reiterated guidance first issued in 2006, reminding the industry that banks with elevated CRE concentrations would face greater regulatory scrutiny.

Bankers say the regulatory focus has carried much greater weight than when it was first issued more than a decade ago, prompting some institutions with elevated CRE exposures to raise capital, slow growth, or back away from that market. Regulators might have taken action at the right time, with the heightened scrutiny appeasing some observers who were concerned that the CRE market was becoming overextended.

Community bank balance sheets also proved resilient in the face of the sharp decline in oil prices between the summer of 2014 and the first quarter of 2016. There has been no evidence of contagion spreading from the energy downturn, and oil prices have rebounded considerably from the lows sustained early in 2016. 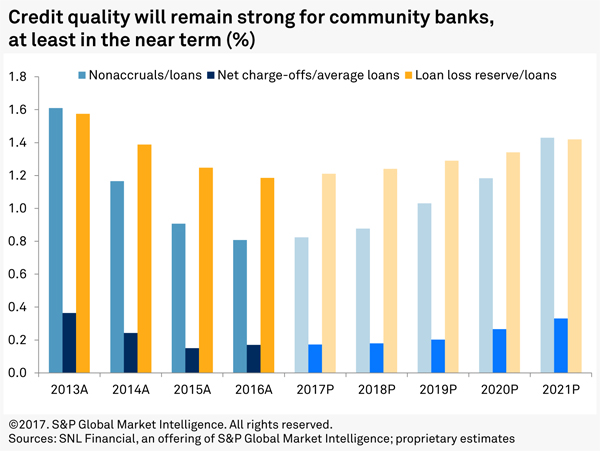 Bankers say they have seen increased signs of optimism on the horizon in the aftermath of the U.S. presidential election, which brought hopes of fiscal stimulus and a more business-friendly environment. Improving sentiment among consumers and businesses has supported hopes that the current economic cycle, which stands as one of the longest on record, still has momentum.

Economists polled by The Wall Street Journal believe the chance of the U.S. entering a recession in the next 12 months has diminished, with the average recession probability forecast falling to just 14% in March 2017 from 22% in July 2016, in the aftermath of the U.K.'s decision to leave the European Union.

New potential loss formation also remains quite low, with early stage delinquencies at community banks falling in every quarter of 2016 when compared to year-ago levels. Consumer credit quality appears to have held up this year as well, with the S&P/Experian Consumer Credit Default Composite Index dipping to 0.94% in February from 0.97% a year earlier.

Against a favorable outlook for credit quality, community banks should see a lift in deposit costs, but those increases will lag expansion in earning-asset yields, pushing margins higher. 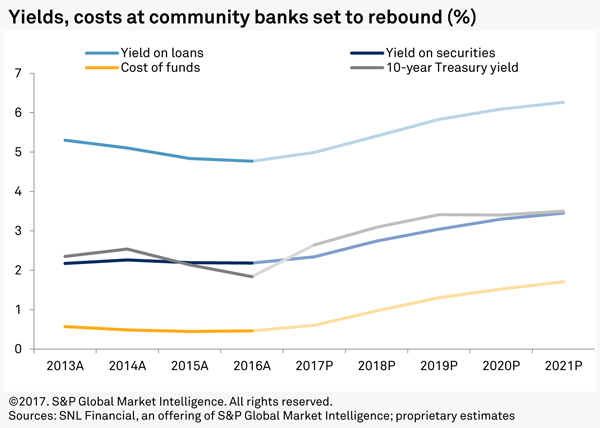 Deposit costs only rose modestly in the aftermath of the Federal Reserve’s first rate hike in nearly a decade, and increases at community banks have lagged their larger counterparts. The deposit beta—or how much of the change in rate is passed on to customers—experienced by community banks was just 7% in 2016, below the entire banking industry's 12% beta. Both metrics are far lower than during the last rate tightening cycle that occurred more than 10 years ago, when the entire industry had deposit betas of 41% and 62% in 2005 and 2006, respectively.

S&P Global Market Intelligence expects that community banks' deposit costs will only rise modestly in 2017, even as the Fed is expected to continue raising short-term rates. The projections assume a beta of 29% on interest-bearing deposits in 2017 and expects that beta to increase to 59% in 2018 after the impact of higher rates takes hold.

Higher yields on key earning assets will partially offset increased funding costs. Expected increases in long-term rates will help security yields expand from near historical lows. Community banks are not expected to receive as big of a boost as their larger counterparts, which have modestly extended duration in their securities portfolios.

Loan yields will expand materially, but the competitive environment will somewhat mitigate the benefits from higher rates, particularly in 2020 and 2021 when credit quality is expected to sour.

If credit quality turns sooner, then margin expansion will stall earlier. In a more lackluster credit environment, loan yields will come under pressure from increasing competition for quality credits, while a number of banks will face mounting pressures on liquidity, causing deposit betas to rise.

Before credit turns, any community bank might be wise to consider partnering with another institution while the tide is on their side. Bank stock currencies have rebounded considerably over the last few months, allowing buyers to more easily ink accretive acquisitions while satisfying sellers' expectations.

Stronger currencies should support a rebound in community bank M&A activity in 2017, following 2016's 13% year-over-year decline in deals involving targets with less than $10 billion in assets. Deal activity declined as transaction multiples decreased in 2016, with the median price-to-tangible book value falling 7 percentage points. Acquirers paid lower prices in 2016 as their currencies came under pressure. The SNL U.S. Bank and Thrift Index traded at a median of 151% of tangible book value throughout 2016, down from 170% in 2015.

The tide turned in 2017 as generalist investors flocked back into the bank group, pushing the bank and thrift index up significantly. U.S. banks traded at a median of 191% of tangible book value in 2017 through mid-March, or nearly 60 percentage points higher than the median price paid for community banks in 2016.

While there are hopes for significantly reduced regulatory burdens, changes are unlikely to materialize soon. Before any relief makes itself fully felt, credit quality could begin to slide and stand in the way of further expansion in deal multiples.

Sellers could also see more buyers entering the fray soon. The Federal Reserve recently raised its exemption threshold for systemic risk reviews on deals, limiting such reviews to transactions involving targets with more than $10 billion in assets or those resulting in banks with more than $100 billion in assets. That should keep most transactions involving community bank targets from facing a longer regulatory approval process. 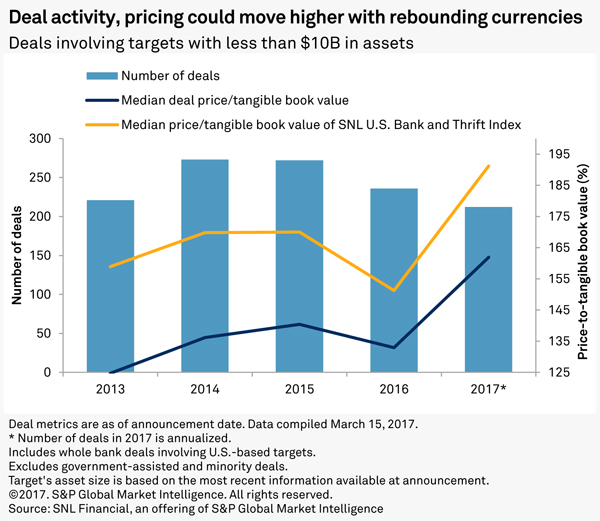 The analysis of community banks, which focused on institutions with less than $10 billion in assets, stems from a larger examination of nearly 10,000 banking subsidiaries, covering the core banking industry from 2005 through 2016. The analysis includes all commercial and savings banks and savings and loan associations and historical institutions as long as they were still considered current at the end of a given year. It excludes several hundred institutions that hold bank charters but do not principally engage in banking activities, among them industrial banks, nondepository trusts and cooperative banks.

The analysis looked back more than a decade to help inform projected results for the banking industry by examining long-term performance over periods outside the peak of the asset bubble from 2006 to 2007. S&P Global Market Intelligence has created a model that projects the balance sheet and income statement for all banks below $10 billion in assets and allows for different growth assumptions from one year to the next.

This article originally appeared on S&P Global Market Intelligence’s website under the title, "M&A in the cards as US community banks ride high on the credit cycle"