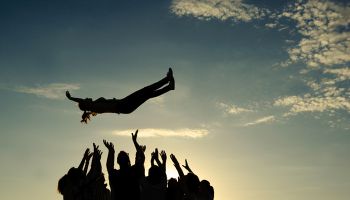 All politics is local, they say. And so it is with banking. What works in New York, San Francisco, or Boston may not work in Hutchinson, Kan., and vice versa.

Here’s the flip side of that story. Central Bank & Trust, situated near the middle of the country, also has customers with small-dollar investing needs, but it has no plans to partner with a fintech for robo advice.

“We’re far from it,” says Brian Schmidtberger, senior vice-president and trust officer for the $290 million-assets bank. “Not even in the cards.”

The bank is not out of touch. Schmidtberger oversees a trust operation that has $400 million in discretionary assets under management and is corporate custodian for another $1.5 billion. Securities brokerage also falls under the trust umbrella. Overall, the operation contributes 8%-10% of the bank’s profit.

Schmidtberger joined CB&T nine years ago after running trust departments at two other community banks. About two years ago, he says, the CB&T trust unit moved into the farm management business. Schmidtberger hired a full-time person for the farm business last summer, and since then, it has grown rapidly.

Several other lines of business fall within the bank’s trust group, which has ten full-time employees. One is employee benefits—401(k)s and IRA rollovers. Another is investment managed accounts, or agency accounts. A third is traditional trust and estate work. It doesn’t stop there.

“We’re a corporate custodian for a third-party administrator,” says Schmidtberger. That business—a 15-year relationship requiring a strong back office—has begun to slow a bit, he says. But the bank recently contracted to do directed trustee services for another firm.

“When outside entities want to do certain fiduciary functions in the state, they have to find a Kansas-based trustee,” he explains.

As noted, full-service brokerage is part of Schmidtberger’s group. “That’s another $75 million that we take care of.”

“The good thing about the trust department,” Schmidtberger says, “is that no matter what’s going on in the loan business or the mortgage business, the fiduciary or the trust income is pretty steady income every year.” Exceptions occur if there is a big drop in the stock market since some revenue is based on asset values.

Back to the question of robo-investment options, Schmidtberger and the bank’s management are not anti-technology. But they are a bit contrarian. Schmidtberger says that old-school relationships are still valued and preferred.

“There’s a niche out there that wants to go robo, but I can tell you right now the bulk of the people we deal with still want somebody to manage [their money]. They say, ‘I’m so glad you’re taking care of this so I don’t have to.’” Even some young people feel that way, says Schmidtberger.

The contrarian streak at CB&T goes beyond robo advice. Many in the banking and securities industries regard the Department of Labor’s Fiduciary Rule (expanding the circumstances under which a person is considered to be a fiduciary) to be overbroad. Schmidtberger says the rule—which took effect June 9—has helped.

“We’re already a fiduciary,” he says. Ten years ago, he adds, the bank’s president and CEO, Earl McVicker, made the decision to shift the bank’s brokerage business from a packaged product with a front-load fee into an assets-under-management arrangement.

Schmidtberger believes more transparency is good. “All our stuff is disclosed in black and white. Why not make our competitors do the same thing?” he says.

He notes that the DOL ruling has sent business to CB&T as some brokers have stopped selling packaged products.

Some maintain the rule will disadvantage small investors. For CB&T customers, however, that is not the case.

“The trust department, like the bank, is a reflection of our community,” says Schmidtberger. “And so we don’t set minimums because there are cases where we will take a small account that’s not going to be profitable to us.” While it’s not promoted, he says: “As a corporate citizen and member of the community, there are times that you just need to help people out.

This article originally appeared in the June-July edition of Banking Exchange magazine.