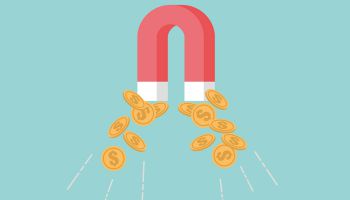 The trend has already influenced bank M&A and is expected to continue to do so, bankers and analysts say, as buyers look for targets that are flush with low-cost deposits.

"If you have really good core deposits, the greater the value of the whole franchise," Compass Point Research & Trading analyst Laurie Havener Hunsicker said in an interview.

She explained that such deposits are often made by long-term customers in accounts that bear modest interest. Deposits considered core are typically in a bank's home market and usually do not include investment products with variable rates or large certificate of deposit accounts.

Core accounts cost banks less and the customers behind them are less likely to shop their deposits around in search of more favorable terms as interest rates rise. This is because such customers often have developed lasting ties to their banks for reasons other than just deposit rates.

Banks with high levels of core deposits can more profitably deploy them to fund loans in rising-rate eras, as most banks are able to bump up rates on loans during such periods. This enables them to widen the spread between what they charge for credit and what they have to pay on deposits, and the difference bolsters bread-and-butter interest income.

Against that backdrop, Hunsicker said it is easy to understand why acquisitive banks have routinely cited a desire to pack on more core deposits as a driver of their decisions to buy out competitors.

"And we will continue to see that," she said. 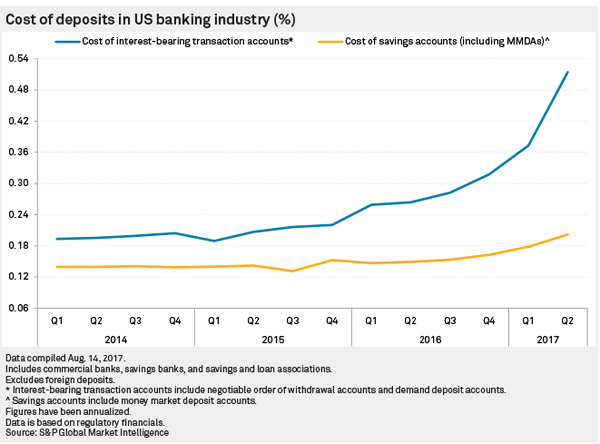 For example, the cost of savings accounts rose to 20 basis points in the second quarter from 18 basis points the previous quarter and from 15 basis points a year earlier.

Following years of ultra-low interest rates in the aftermath of the 2008 financial crisis, the cost of savings accounts was at 14 basis points in the second quarter of 2014.

Meanwhile, the cost of interest-bearing transaction accounts climbed to 51 basis points in the second quarter from 37 basis points the previous quarter and from 26 basis points a year earlier, according to the analysis.

The cost of these accounts hovered at 20 basis points in the second quarter of 2014.

Keefe Bruyette & Woods Chairman, President and CEO Thomas Michaud agreed that pricing pressures on deposits are likely to continue to gradually build, and as this happens, more bank buyers are likely to take note.

"I think that the deposit side of the balance sheet is going to get more focus going forward in acquisitions," he said in an interview.

Looking at a Florida example

The Florida-based company this month announced a pair of bank acquisition plans in its home state: one to buy Fort Pierce, Fla.-based HCBF Holding Co. Inc. and the other to take over Plant City, Fla.-based Sunshine Bancorp Inc. In doing so, CenterState executives said the appeal of strong core deposit bases at both targets prominently factored into their decisions to pursue the deals.

They said they want to continue to amass more core deposits now, before others beat them to it, to fund ongoing loan growth ambitions.

"Our sense is that we are in the back half of the economic cycle," CenterState President and CEO John Corbett said during a call to discuss the two deals. "And at this stage of the cycle, lending opportunities become abundant but core deposits become scarce."