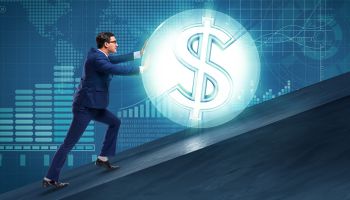 "There is growth, but it is not robust," Merion Capital Group bank analyst Joe Gladue said in an interview. "Overall, I expect a little bit of earnings growth industrywide, with modest upticks in loan volumes."

There will be exceptions to the rule, of course. But Gladue said that while macroeconomic conditions continue to improve, notably including ongoing momentum in the labor market, they have not yet advanced at a fast enough clip to substantially boost many banks this year.

Community banks that rely on bread-and-butter lending and the interest income it generates to drive earnings typically reflect the economies where they operate. When growth is slow, business owners often are careful about borrowing to invest in their own expansions.

They said that Federal Reserve H.8 data released this month point to slowing loan growth. Smaller lenders—community and regional banks—grew loans at about a 6% year-over-year pace in August. That was down from the roughly 7% rate reported at the start of 2017, the analysts noted.

Commercial-and-industrial loan growth, at 3.3%, was notably modest for these banks.

The Compass Point analysts said commercial borrowers had started the year with optimism following the 2016 presidential election. Republican President Donald Trump had vowed to work with a GOP-controlled Congress to pass major legislation that could have benefited businesses and, by extension, the banks from whom they borrow. Trump had called for deregulation, tax cuts, healthcare reform, and infrastructure spending.

But no such bills have reached the president's desk yet, leaving many business owners in wait-and-see mode.

"Overall loan growth has continued to slow in the face of uncertainty," the Compass Point analysts said.

Merion Capital's Gladue also noted that earlier in the year, optimism among investors was fueled some by expectations for stronger net interest margins for banks following Federal Reserve rate hikes. And while many banks did post improvements to their NIMs in the first half of the year, some lenders during the third quarter started to report that they were experiencing pressure to lift the rates they pay on deposits, Gladue said. That pressure, he noted, could begin to offset gains on the lending side and curb improvement to third-quarter margins.

Meanwhile, when it comes to expenses, banks continue to enjoy strong credit quality and low costs tied to loan losses. With the economy still expanding, albeit slowly, there are no major and immediate threats to the industry as a whole on this front, Gladue said. But he did note that banks active in markets such as South Florida, southern Texas, and Puerto Rico that have recently been hammered by powerful hurricanes could endure some elevated credit losses either this quarter or next. Customers displaced by storm damage could struggle to make loan payments.

"Historically, after these kinds of storms, we have seen banks benefit from strong loan demand when rebuilding gets going," Gladue said. "But the immediate impact is probably negative. If you can't open your business or get to work, it can be hard to pay your bills."

Absent major deregulation, community banks continue to grapple with the high compliance costs that have mounted in the years since the 2008 financial crisis. During this period, Congress passed the 2010 Dodd-Frank Act, which called for reams of new rules, and regulators have ramped up the amount of compliance work they expect from banks.

Against that backdrop, hundreds of community banks have decided to sell to larger players in order to get out from under the regulatory weight. Matthew Shields, managing director of equity capital markets at Performance Trust Capital Partners, said in an interview that regulatory costs, along with increasing pressure on small banks to invest in information technology, will continue to drive M&A.

Bankers' outlooks on the deal front are likely to be of great interest for investors and analysts during earnings season in October. For the smallest banks, Shields said, it is "really difficult to find a path to long-term profitability." As such, he added: "I think a lot of guys will say they don't want to deal with it anymore"—and they may sell.

This article originally appeared on S&P Global Market Intelligence’s website under the title, "A grind for small banks heading into Q3 earnings"