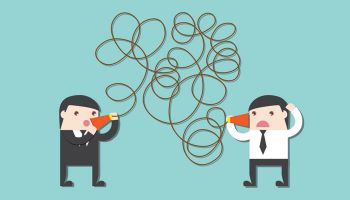 With the world now basically one giant, live-chat room, no one in a business leadership position can afford to ignore communication skills.

Everyone is one bad tweet away from going viral.

Clearly it’s a good time to be a communication consultant and trainer. In a recent interview with Merrie Spaeth, founder and president of Spaeth Communications, we observed that “you certainly don’t lack for material these days,” to which she responded with a laugh. “As Sen. Lamar Alexander put it to me, it’s a ‘target-rich environment,” she said.

The proliferation of media—social media in particular—is one reason for communications being a bigger challenge now, says Spaeth. “Social media makes it so much easier to fling around words,” she says. And the words live forever: “There is no redemption.”

A second reason lives in The White House. 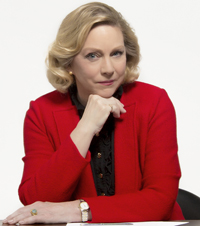 When you get a question you don’t want to answer, don’t ignore it. Acknowledge it with a short response and move on to your point.            — Merrie Spaeth, founder and president of Spaeth Communications

“We have a President,” says Spaeth, “who—whether you like him or not—really understands how to get attention and use communication as a tool.”

Before founding her company in 1987, Spaeth held high-level communications posts at ABC (she was a 20/20 producer), CBS (speechwriter for William S. Paley), the FBI, and the Federal Trade Commission. She also spent a year in the Reagan White House as director of media relations. Her firm has worked with many community banks and with national and state bankers associations.

For many years she and her team have produced a monthly “Bimbo Memo” that highlights dumb public comments made during the month by government, business, sports, and media figures or anyone in the public spotlight. The full version of the memos on the company’s website also offer examples of good communications and tips for anyone wishing to avoid making the Bimbo list.

Why “Bimbo”? The newsletter explains the name: “When you repeat and deny a negative word, the listener is likely to overlook the denial and hear the opposite of what the speaker is trying to say. It’s named for the young woman who was caught with a high profile, but alas married man. She held a press conference and announced, ‘I am not a BIMBO,’ thus causing everyone to think she was.”

Here is an edited recap of the interview with Spaeth.

Banking Exchange You went after Apple in a recent blog about first saying “We would never do anything to intentionally shorten the life of any Apple product” and then, a few days later, apologizing for slowing down older iPhones. What was your takeaway from this gaffe?

A. One of the things we preach: Always tell the truth, because in a pinch you can remember it. If you do what Apple did [slow the phones], it’s going to get out.

If in the beginning Apple had said, “This is a battery issue and we want people to perceive our intentions,” they might have taken some heat but it wouldn’t look like they were purposely lying and covering up.

Banking Exchange I once wrote a column where I took issue with companies for saying as a public response, “We cannot confirm or deny” or similar phrases. “Why don’t they just say, ‘We made a mistake’,” I wrote. Later I thought that comment may have been naïve, because there could be legal implications for admitting to a mistake.

A. There are more than legal implications. There are regulatory and compliance issues. Rather than say, “We can’t confirm or deny”—which is legalese married to law enforcement, and it doesn’t get any worse than that—we tell our clients to say, “It’s just not appropriate to discuss that.” When the question comes back, “Why not?” they can say, “It’s a personnel matter and we respect people’s privacy” or “It’s under investigation and we’ll let that take its course…” There is always something you can say that doesn’t jeopardize the specifics which are preventing you from explaining it.

That brings me to another point. I am absolutely passionate about the importance of rehearsal and anticipation. An executive should be able to anticipate most questions, comments, charges. For the ones that aren’t anticipated, he needs to understand how to handle that. Usually by saying something like, “Gosh, I would need to think about that. What’s your next question?”

Banking Exchange So many people fall into the trap of repeating the negative when questioned. Why is it so common? How do you avoid it?

A. It’s so common because without practice we all pick up and repeat each other’s words, and negative words crowd out positive words. Being made aware of the tendency helps. But the other part of it is you have to know and remember to use your positive anchor words. For banks these could include safe, secure, affordable. Otherwise it’s really easy to just spit the words back.

Even a very accomplished, experienced politician like New Jersey Governor Chris Christie can get caught doing this. He was speaking with reporters during the Bridgegate incident and in response to something he had done or said, one of them asked, “Doesn’t that prove you’re a bully?” Christie’s response was, “I am who I am but I’m not a bully.”

Guess what the sound bite was? “I’m not a bully”!

Instead, if he had anticipated such a question he could have said, “I am who I am. And what I am is a very forceful personality determined to do the best for New Jersey.” But unless you’ve thought it through, and have a comeback, it’s real easy to fall into the trap.

Banking Exchange As your example shows, reporters seem to know that and sometimes set people up.

A. As you know, I’m sure, reporters need good quotes. Canned corporate quotes are like death to them. So instead they may ask, “What are you covering up?” and let the person say, “We’re not covering up anything.”

But I take issue with how journalism is taught these days, it is so heavily framed in the negative. The truth is important, of course, but you also need to tell a good story. And frequently that means taking on a topic—whether it’s government debt or pensions—and really making it accessible—helping people to understand it. Not “gotcha journalism.”

Banking Exchange That may not change soon, so any bank CEO should practice for “gotcha” situations, right?

A. Absolutely, but it’s more than that. Most people when they think about communication think, “Do I know enough?” Their media trainers interview them, critique them, and have them do it again.

Banking Exchange At times, particularly in broadcast interviews, a person just blatantly ignores the question and responds with their talking points. Is there a way to get your key points across without ignoring the question?

A. One of our insights is that every response should have an acknowledgement, a structure, and a topic. Any short, truthful phrase that says, “I’ve heard the question,” is accepted by the listener. Then you, the respondent, have to decide “Is this a topic I want to dwell on?” That’s critical in terms of influencing viewers’ memory, particularly in short television interviews.

I’ll give you an example. When Travis Engen, former CEO of ITT, was on Squawk Box to talk about a recent acquisition, one of the first questions was, “Are we going to find out you were not the first bidder?” It was not a hostile question but a topic Travis didn’t particularly want to spend time talking about. So he said, “No, I don’t think so,” and then flowed right into, “We’re building up fluid technology for a reason….”

Having responded to the yes/no question with “I don’t think so,” he was done with it. That’s all it deserved, particularly at the beginning of the interview. He knew what topic he wanted to dwell on.

But the worst thing people can do is just ignore the question and say what they want to say. Because if you look like you’re ignoring the questioner, terrible things happen in terms of managing the listening of your audience.

Banking Exchange How do you avoid saying too much?

A. We have a four-point formula that comes in handy: Question acknowledgement, headline, proof point, stop. The goal is not to get everything you know about a topic into a response, but to get one piece that supports your headline and then shut up.

This works in equally well in inter-company communications. Here’s an example: A CEO in the hospitality industry traveled constantly and ran the company on his iPhone. The manager of his tax department was in the habit of responding to the CEO’s phone questions with “reams” of detail. It got to the point where the relationship was going south quickly, and we were called in to help.

We coached the tax exec that when the CEO asks a question the exec must respond so the CEO can read it easily on his phone. So the “headline” response to the question might be, “We think we’ve got our arms around this.” Then say, “Do you want more?” He’ll say yes or no.

Banking Exchange Do you see effective use of social media—Twitter in particular? Or has it just degraded communication?

A. Social can be effective, absolutely, but not all Twitter is equal. You have Twitter building a personality—like Kim Kardashian or President Trump—and Twitter as a universe to pick up complaints. In the latter case, companies like FedEx literally have teams watching what people are saying about them so they can jump on it immediately. But too many companies put stuff out on Twitter that’s just clutter.

To your second point, clearly, one of the things that has degraded communications is anonymity. People say all kinds of things they would never say if their name were attached to it. All the social platforms let people conceal their identity.

Banking Exchange You’ve spoken to banking groups about communicating more often about what banks do for people and communities. Have you seen much response?

A. Banks are doing a better job, but they’ve got to enlist their customers more often in the process, and the simple way is to just ask. Bankers are very concerned about privacy and confidentiality, and that’s wonderful, but they can still ask.

First Financial Bankshares in Texas is a good-sized community banking company. They have some great customer service stories and had a customer do a commercial about one of these stories for them. You need to get the people you’re helping—business or retail—to speak for you.

This is also where social media can be fantastic. Everybody is on Facebook or something today. Plus you’ve got things like the “mommy blogs,” and neighborhood platforms like Nextdoor. That’s where people locally share recommendations for a plumber or an electrician, or share a bank story. These platforms are sweeping the country—they empower local people. Large companies have no clue how to get their arms around them, but they are a fertile opportunity for community banks, which really are neighbors.

Banking Exchange Any other communications pointers you would offer bankers?

A. Bankers should become person-to-person video enabled. In other words be able to talk to your customers and to the community direct to the camera or to an iPhone or iPad. I think bankers are a little behind in terms of understanding that skill both as part of their strategy and in terms of their personal comfort level, but it’s the way the world is going.