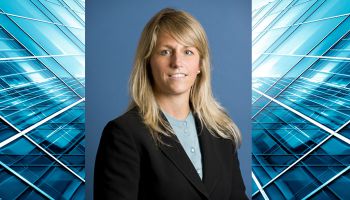 While she is upbeat in some regards for the Northeastern banks she covers, Keefe, Bruyette & Woods, Inc., analyst Collyn Gilbert also has concerns regarding commercial real estate and technology adoption.

Many midsized and community banks still lean too heavily on branches, and have been slow to take up technological innovation, according to Collyn Gilbert, managing director and analyst of midcap banks in the Northeast at Keefe, Bruyette & Woods, Inc.

“While the Jamie Dimons of the banking industry are clearly big thinkers, outside of them I wouldn’t characterize the majority of bank CEOs as very innovative,” says Gilbert, a veteran bank analyst. “The timeline to adopt technology and the changes that that would bring to the industry is going to be pretty extended.”

Gilbert sees the advent of fintech as very important to the banking industry’s future, and something that will change the way banking functions over time.

“It’s a powerful influence,” says Gilbert. “It’s absolutely going to take hold and the industry will gradually turn.” But that turn will resemble the proverbial movement of an aircraft carrier, rather than the agility of smaller craft.

Part of the reason is the sheer size of the industry. Even as banking consolidates and few new banks are formed, she says, there are many leadership teams that are not moving quickly on innovation. With thousands fitting that description, the industry’s shift will be gradual.

“You’re going to have players on the periphery who may have more flexibility,” Gilbert continues in an interview with Banking Exchange. “They may have innovative management teams and boards and they may not be as tied to traditional brick-and-mortar branches. They can adapt to new business models and new investments in technology more readily. But for the majority of the industry it is going to take a while.”

Lack of agility—and hope on that front

Gilbert occasionally calls herself a “permabear,” the legacy of having covered banks, a conservative industry, for her entire career. In a recent KBW press briefing, she spoke of some optimism for the banks she covers—“I’m the most optimistic I’ve been in a while,” she said at the time, particularly because she expects ROAs to improve due both to rising rates and the new tax law.

However, lack of technological adoption and concerns in the commercial real estate area are also on her mind and she discussed these in the interview.

“Where [banks] fall short is fully understanding the use and capability of that technology,” Gilbert says. “They’ll redo systems. They’ll set up new platforms and get new software. They’ll have all the offerings and perhaps the infrastructure from a technological perspective. But there’s still a large gap that needs to be bridged on how to most effectively use the technology and how to minimize the human part of it.”

“They’ll make decision in January 2018 to pursue some new platform, but by the time they’re fully up and running and leveraging the new technology a new piece of tech will have come out,” says Gilbert. “So I feel like they’re always maybe one or two steps behind.”

Gilbert was asked if the industry’s historical conservatism “dooms” it to this state of affairs. She rejects that word.

“I wouldn’t call the industry ‘doomed’,” she says. “It’s more of an uphill battle that the industry has put itself up against.”

Part of the challenge is the graying of the corner office and the boardroom. However, Gilbert also sees a counteracting gravitational pull that could hasten the industry along a bit.

This was a post-crisis shift of the “best and brightest” college graduates towards commercial banking. For years, she says, such young people aimed for careers in investment banking or other Wall Street oriented jobs.

“One of the best things that the financial crisis has done is redirect that,” says Gilbert. “It caused more people coming out of school to rethink their financial services path and look at opportunities in commercial banking.”

Since the crisis, she elaborates, the commercial banking industry has been in a growth phase. “It re-levered and has been in an aggressive growth mode,” she says. That proved attractive to graduates.

The result has been the beginnings of a fresh influence on the industry. “You’re getting younger, more innovative thinkers, more current thinkers, folks who are easily adapting to the new technologies and what they offer,” says Gilbert. “I think it’s going to gradually change the industry.”

Stuck on the branch model

This generational change will be for the betterment of the industry, Gilbert believes.

“Banks too often use branches as a crutch for their branding strategy, to make their presence known, and that’s the only way they know how to acquire customers,” she says. “One of the bigger challenges for boards and management teams is to think more creatively about customer acquisition strategy. They have to think more creatively about outreach to the new customer.”

Many of the institutions in the size ranges that Gilbert covers are mired in this attitude, in part because frequently they are geared more to small business owners than to the retail side of financial services.

“They can still get away with defending branches because the customers come in and they want that local feel among local entrepreneurs and local business owners,” says Gilbert. But, as a result, the reliance on branches leads to missing retail banking opportunities.

“Their retail strategy is more a function of getting CD customers in the door,” she says. “They’ve not mastered the full-fledged targeting of their retail customer base.”

Related to the current focus, in the Northeast region that Gilbert handles, is a very strong focus on commercial real estate lending. There are multiple implications here.

First, Gilbert anticipates an increase in the pace of industry consolidation., For weaker banks that wish to be bought, however, there is a sticking point: CRE.

“Quite frankly, does a potential acquiror want or need to buy some of these banks that are under core-funded and that are heavy in commercial real estate, with not a lot of other value to bring to the table?” she asks.

The future of the government sponsored mortgage entities, Fannie Mae and Freddie Mac, are part of the pending equation on both the residential and CRE fronts, she says. That is an issue that continues to percolate in Washington.

But so is the evolution of various types of commercial real estate in the region.

The quickening deterioration of malls in many parts of the country, substantially due to the buildup of ecommerce, is a much-told story today. But even there, Gilbert, just going on the evidence of her own eyes, admits to some uncertainty.

She acknowledges that she is a not a fan of malls personally. But when she does shop there and at large retailers like Ikea, she says she has been struck by a trend that isn’t spoken of much while writers pen the obituaries of American retailing.

The filter often used is purchasing, but for many demographic groups, she suspects, malls are about more than buying things.

“I’m not a REIT analyst nor have I been studying consumer patterns in malls,” says Gilbert. “But when I do go shopping I see that for some going to a mall is still an activity. So for as long as there is a generation of people for whom going to a mall is a kind of [social] activity, maybe there’s some support out there.”

This may extend the life of such properties, and the activity of lenders in this area, somewhat, although Gilbert suspects that over time ecommerce will continue to erode such assets.

There’s another wrinkle Gilbert’s noticed that is downbeat for lenders to strip malls and shopping centers. Community and midsized banks frequently defend their retail CRE portfolios because the centers they finance are anchored by a grocery store or a pharmacy like Walgreens.

Amazon’s acquisition of Whole Foods, she says, signals the need to rethink even grocery stores in the retail space. As does, she says, the recent proposed acquisition of insurer Aetna by CVS Health, the pharmacy company. The environment is changing.

And strategic shifts in retail are a yellow light. Gilbert notes that a Walgreens in her town recently closed.

“That was really surprising because I’ve never seen a Walgreens close before,” says Gilbert. “And then one of the banks that I follow had a CRE credit go bad recently, and it was secured by a property that was anchored by a Walgreens.”

(More of this could be coming. Last fall Walgreens Boots Alliance, the parent company, announced plans to close about 600 stores, beginning this spring, as part of the business plan for purchasing about 2,000 Rite Aid stores.)

“Banks feel so comfortable that they can lend based on these 15-year leases because of those anchor stores,” says Gilbert, “but I’m thinking, ‘Guys, that’s going to be the next tier of vacancies.’ That’s an area these banks need to be more thoughtful about.”

One continuing source of some strength will be CRE lending for residential multi-family projects, says Gilbert. There will be repricing, she says, “but I don’t think you’re going to see massive vacancies within that space.”

One potential bright spot are projects that build mixed-use developments of apartments with shopping and other services that create mini-communities—you could almost throw a dome over some of them and pump in services.

“I’m cautious on that, but I wonder if that is a prudent way of housing the Baby Boomer generation that’s aging,” she says. “The still have plenty of life to live, but they want things to be at their fingertips.”

Everybody wants things to be local, she explains: “The idea of driving 15 or 20 minutes to a grocery store—we don’t want to do that anymore. Amazon created that attitude, right? You can click a button, so why would you ever inconvenience yourself to go far for anything?”