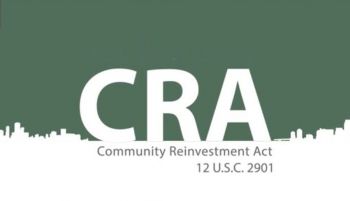 Regulatory officials in recent days have taken what appear to be initial, tentative steps toward the daunting task of revising the Community Reinvestment Act: They are talking publicly about it.

That is of no small significance, given that the conversation is fraught with some of the most complex, and occasionally conflicting priorities that banking regulators must pursue. FDIC Chairman Jelena McWilliams in a speech last week bore personal testimony to the importance of the CRA, just days after Federal Reserve Board Governor Lael Brainard affirmed that the Fed was also thinking about how to move forward.

The nominal starting point for the conversations to come is the advanced notice of proposed rulemaking on modernizing the CRA that the Office of the Comptroller of the Currency issued last year — and the roughly 1,300 distinct responses to it from the financial services industry, advocacy groups, and representatives of federal, state, and local government entities, among others.

We undertook a comprehensive review and analysis of the responses, which constitute the early stages of what promises to be an ongoing, animated debate — in which the banking industry, which represents a single constituency among many seeking a voice, is struggling to find common ground. About the only clear point of agreement was that the OCC should not act alone in revising the CRA. Whether it should do so wasn’t even among the 31 questions the agency had posed within its wide-ranging ANPR.

Prudential regulators have almost always acted in tandem since they issued the first set of CRA regulations in 1978, and the industry prefers it that way. While stressing collaboration may be no surprise for state-chartered banks that would not benefit from unilateral OCC modernization, many national banks also advocated for a joint revision. They said a joint regulation would reflect a broader array of perspectives and that a uniform CRA framework would have wider acceptance, greater consistency in application, and more enduring effect.

One of the key elements of the OCC’s attempt within the ANPR to adopt “a more transformational approach to the CRA” was the creation of a metric-based performance measurement system that, broadly speaking, would benchmark dollar value of CRA-qualified lending, investment, and service as a percentage of a bank’s domestic assets, deposits, or capital.

There was relatively little unconditional love for this proposal, at least in terms of it fully replacing the current framework. Banks said a one-size-fits-all metric-based system was too inflexible to address the diverse needs of different local communities and different bank business models. Some observed that a single measurement would not account for variance in product mix, business strategies, and services, rendering the measurement less meaningful.

Several banks noted that the single metric could undermine service to certain local communities by creating concentrations of large deals elsewhere, as bank incentives to serve each market where they operate disappear or are reduced.

One idea that emerged from industry comments was use of a benchmark metric as an alternative means of satisfying the CRA, essentially a safe harbor in the event that the rating under a more subjective system would be lower.

Banks and regulators generally agree that defining a bank’s assessment area by its physical locations is a quaint notion. How to modernize the concept, however, is far from clear. About all that banks agree on assessment delineation is that whatever rules come out of modernization should be flexible.

A bank’s business model largely determined its position on delineation. Some branchless or near-branchless banks supported broadening assessment areas to where the bank does business or is chartered. Several advocated a specific branchless-bank examination procedure, given the conundrum of identifying suitable assessment areas rooted in physical presence.

Banks with branch networks generally advocated retaining geographic boundaries while adding a deposit-based component, arguing that such a framework would augment the current approach rather than supplant it, and could foster CRA activities in underserved areas. Some cautioned, however, that a deposit-based component risked further concentrating CRA activity in wealthy metropolitan areas.

The industry responses emphasize the challenge ahead for banking regulators. Banks want collaboration, but even within their own constituency couldn’t find broad consensus on a metric-based performance system and assessment area delineation process: two elements of the CRA that need modernization most.

What is certain is that banks are not yet speaking with a common voice on CRA modernization, and doing so is an understandably difficult task given the growing number of business models that define modern banking. But comity will become increasingly important as other CRA stakeholders, notably community advocates and government entities, voice their concerns about giving banks discretion in how they comply with the CRA.

Warren Traiger is Senior Counsel at Buckley LLP and advises clients on consumer compliance matters, with a focus on the CRA and fair and responsible banking issues. Caroline Eisner is an Associate at Buckley LLP and represents clients in litigation and regulatory matters, including issues involving the CRA.