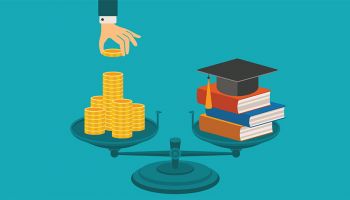 Why all of the hype about student loans in the news? After all, how many people are impacted and how much does it really hurt the economy? Actually, the effect of student loans is greater than meets the eye. Most bankers are familiar with how high interest credit cards hurt the middle class with savings.

However, overall student loan debt surpassed credit card debt on a national basis more than a decade ago, a problem unique to American consumers. In fact, the only thing higher on the American consumers’ overall balance sheet is home mortgage debt which has major tax benefits, and is also a strategic investment.

When over forty million adults are in debt due to student loans alone, the lack of spending power of these individuals can damage the overall economy. Almost three quarters of graduates start their careers in debt and the figures are rising. The average debt has risen almost 50% over the last 15 years to more than $30,000….and nobody seems to argue that the pay off on wages have kept pace. About 20% of recent graduates have more than $100,000 in student loans to pay off.

While a strong argument can be made against some of the presidential front runners’ calls for loan forgiveness, even republicans are realizing the drag the effect has. A recent graduate with major debt will take much longer to enter into the housing market or start a business. The automotive industry, not guilt free in its own lending practices, can also be dragged down by consumers that may not qualify (or more likely will increase default rates) for a car loan.

Long term, younger people will no doubt put off getting married and having families due to debt. Statistics play this out, with people in debt being twice as likely to postpone marriage. Homeownership also drags down proportionately depending on how much a person owes in student loans.

What is the answer? In some ways, competition between colleges may already be showing signs of correcting itself through both technology and the free market. For instance, accredited online classes are already becoming more mainstream and students are realizing that they can offset costs by taking at least some of their classes online.

Secondly, many families are realizing that the costs of private universities are not justified based on the financial payoff after graduation. Private schools that are not in the top tier are struggling for survival, and perhaps rightfully so as statistically speaking the investment for high cost liberal arts schools show no distinction on long term earning power for private school college graduates compared with state school graduates.

States schools are not just for the middle class anymore, as applications and enrollment from wealthier people are up as they are asking themselves why pay more for equal results as the costs start to effect even top earning households.

However, it is time for both republicans and democrats to come together to think through a reasonable solution to this potential drag on the economy. Growing a strong credit history and the ability to purchase more than just a college degree is a key part of young adults’ ability to grow financially and fuel the overall economy.

One does not have to agree with Bernie Sanders and be a card carrying socialist to realize student loans can have a negative effect on the economy and the banking industry. In fact, capitalism needs an innovative solution in support of the consumer.