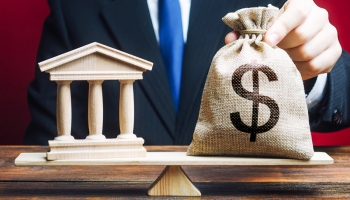 The US Senate has unanimously agreed on new legislation to add more than $320 billion to the Paycheck Protection Program (PPP).

The bill will now pass to the House of Representatives for a vote later this week.

The PPP’s initial $349 billion of funding for small business loans ran out last week, and banks and industry organizations have been lobbying hard for an expansion.

Chuck Schumer, Democratic minority leader in the Senate, told CNN yesterday that there had been “an agreement on just about every issue”.

The agreement also included funding for a national testing program to improve tracing of the COVID-19 coronavirus.

Addressing the Senate yesterday, Schumer said: “We’re not going to cure the economic problem [caused by COVID-19] unless we can cure the health problem.

“We can give loans to small businesses, but if there are no customers walking the streets to go into their stores, what good is that?”

Within the $320 billion package, smaller banks, credit unions and community development financial institutions – those with less than $10 billion in assets – will receive a minimum of $30 billion between them.

Another $30 billion has been earmarked for banks and credit unions with between $10 billion and $50 billion in assets.

Several reports have suggested that smaller community banks have been more successful in processing PPP loans since they were introduced by the government at the end of March.

In addition, the bill includes an extra $60 billion in funding for the Economic Injury Disaster Loan program.

Rob Nichols, CEO and president of the American Bankers Association, said the expansion of the PPP was “critical” for the “millions of small businesses desperate for assistance”.

Data from the Small Business Administration, which is facilitating PPP loans, showed that almost 1.7 million companies had accessed the loan program. The average loan was for $206,000.

“America’s banks will continue to stand by their small business customers and do everything they can to deliver this relief quickly and efficiently, saving jobs and limiting the economic damage from this pandemic,” Nichols added.

Jim Nussle, president and CEO of the Credit Union National Association, said the legislation would “ensure that hard-working men and women across the country will be able to remain financially secure in spite of the pandemic”.

Meanwhile, EY this week announced the launch of a loan platform in collaboration with Microsoft Cloud to help banks process PPP loans from application through to repayment or forgiveness.

PPP loans are eligible for forgiveness as long as the money is only used for payroll costs, mortgage interest payments, rent and utility costs over an eight-week period after the loan is granted. Companies in receipt of the loans must maintain their workforce and wages during the period.