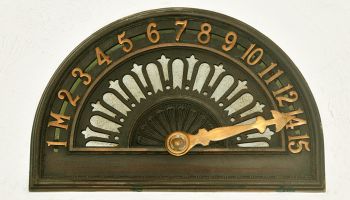 The repeated dose of good news that the banking industry has relied upon the past few years—improving credit quality—continued to boost lenders in the final quarter of 2013, though the benefits of that improvement could wane this year.

An SNL Financial analysis of regulatory filings found that adjusted nonaccrual loans across the U.S. commercial banking landscape declined in the fourth quarter of 2013 when compared with the previous period. They are down substantially from the final quarter of 2011. Net charge-offs in the fourth quarter, meanwhile, also fell and were down to a level that was less than half of where net charge-offs stood at the end of 2011. 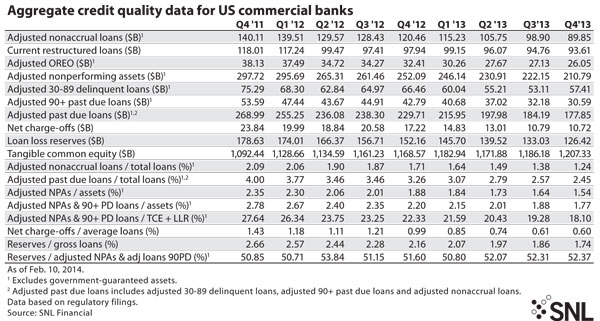 Zions Bancorp., for example, reported that its measure of nonperforming assets plus loans that are 90 days or more past due and still accruing improved by nearly 40% in 2013, including a 13% improvement in the fourth quarter.

"I continue to be very encouraged with the results that we are seeing there," he continued, adding that there is "a lot of underlying strengthening."

Across the country, bankers and analysts attribute the positive momentum to an improving economy—albeit slowly improving—and tighter underwriting standards in the aftermath of the 2008 financial crisis. 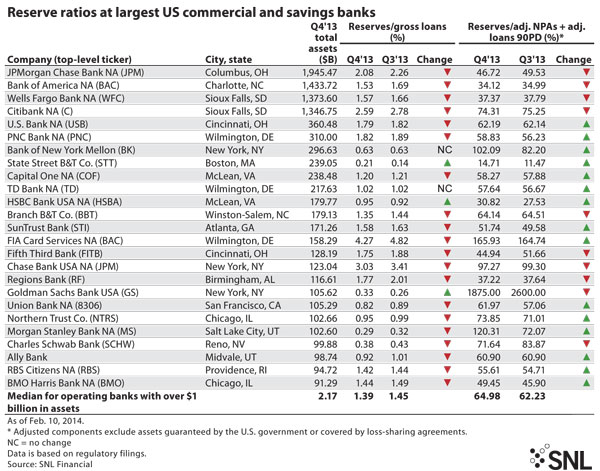 Kelley said the lower credit costs have been very important for banks, most recently as mortgage banking "evaporated" in the second half of 2013 and as low short-term interest rates continued to squeeze net interest margins, cutting into the profitability of loans.

"Charge-offs are continuing to come down and [loan-loss] reserves are coming down with them," he said. "It's still a tailwind." While the U.S. economy is on a bumpy and often sluggish growth path, Kelley sees no "landmines" that would derail the healthy credit story for banks in general.

SNL found that among commercial banks, reserves as a percentage of gross loans fell to 1.74% in the fourth quarter, below the 1.86% level of the previous quarter and continuing a long improvement trend. The level was 2.66% at the end of 2011. 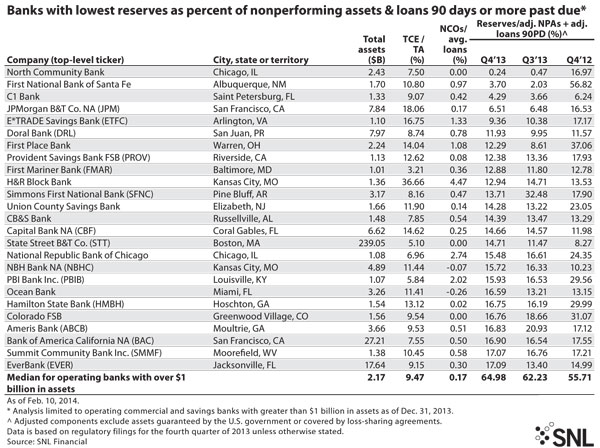 Kelley said charge-off and reserves levels are expected to remain low in 2014.

Even with all of that noted, however, many anticipate that the pace of reserve declines will slow this year as credit costs eventually start leveling off and as loan growth, while modest, gradually builds.

SunTrust Banks Inc., for example, saw its charge-offs fall in the 2013 fourth quarter, thanks in large part to an improving housing market that has trimmed residential delinquencies and lowered loss severities. But its loan-loss provision actually increased $6 million sequentially as loan growth offset improvements in asset quality, according to CFO Aleem Gillani.

"As we look to 2014, we expect further but moderating improvements in asset quality," Gillani told analysts during the company's fourth-quarter earnings call. And loan growth "may offset future asset quality improvements and thus impact sequential changes in the loan loss provision."

Ken Mayland, president of ClearView Economics, told SNL in the wake of earnings season that he thinks economic conditions will improve at a moderate pace in 2014—not fast enough to produce a surge in loan demand but enough for strong banks to build more momentum. As they do this, credit costs will inevitably taper off at some point, as they can come down only so much, and therefore reserve levels are likely to level off as well.

"But that's good in the big picture," he said. "It means things are finally normalizing."

As such, he added, "I see a pretty decent year for banking."