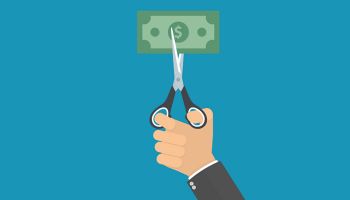 With the first round of 2016 earnings releases behind them, community banks continue to manage their efficiency ratios with cost-saving efforts.

S&P Global Market Intelligence looked at results for the quarter ended March 31 among banks with less than $10 billion in assets.

Sandler O'Neill & Partners analyst Stephen Scouten noted that low rates have limited the power of the "revenue side of the equation," leaving banks searching for cost saves in areas like branch rationalization. Regulatory expenses are also a factor on the expense side, Scouten said, particularly for the banks over $6 billion that have a higher chance of moving past the $10 billion benchmark after a deal. 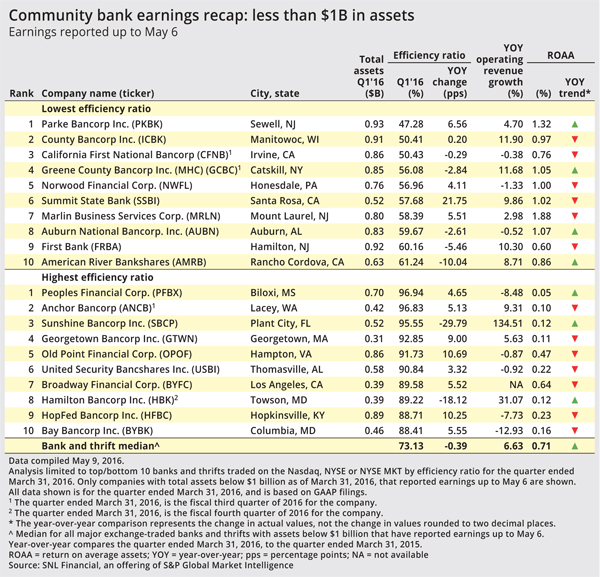 Small banks, too, feel the pinch from regulation.

"One of the harder things to deal with being a smaller institution is all of the regulatory costs," said John Marzullo, CFO at Hamilton Bancorp Inc. The $393 million Maryland bank reported an efficiency ratio of 89.22% for the quarter, down more than 18 percentage points year over year but still on the high end of the spectrum.

"We have to be in line with some of the stuff that larger banks are doing. We're obviously not as efficient because of our scale, to accommodate some of those expenses," Marzullo said.

Like Scouten, he highlighted the challenges that low rates present.

Marzullo noted that Hamilton Bancorp is continually looking for ways to cut costs, including evaluating its vendor contracts and shopping around for less costly options.

"We're a publicly traded institution," he said. "[The efficiency ratio] is a key metric that our investors are looking at and I think in this rate environment and this economy, it is something that banks are heavily focused on." 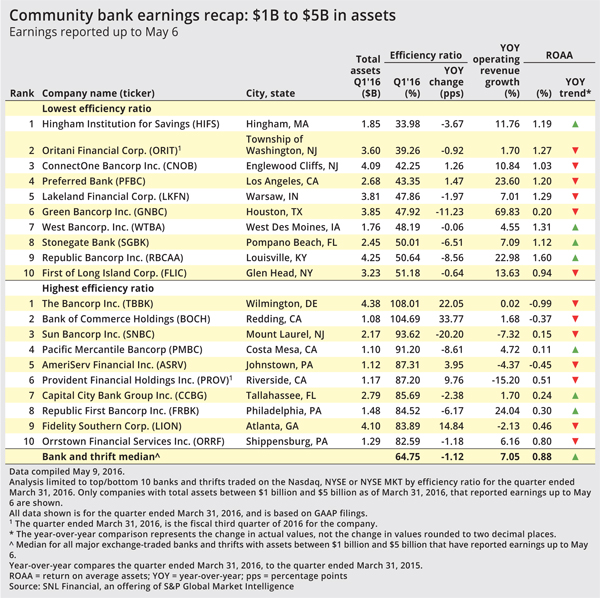 Some banks with long-held strategies of cost-cutting managed down their efficiency ratios despite the challenging environment. Conway, Ark.-based Home BancShares Inc. reported a 37.54% efficiency ratio for the first quarter, down 3.30 percentage points year over year. During the bank's earnings call, executives touted their ongoing efforts to push the ratio lower.

Donna Townsell, senior executive vice-president of corporate efficiencies, pointed out that the bank is keeping a "watchful eye on expenses" as revenue inches upwards. She noted that the bank closed four branches in the first quarter and a fifth in the current quarter.

"We have said it before, it was hard to get here and it is equally hard to stay here," Townsell said.

Scouten of Sandler O'Neill said Home BancShares has focused on managing expenses for years. "They've shown a propensity to manage expenses over the long haul," he said. "It's not a new phenomenon for them."

Birmingham, Ala.-based ServisFirst Bancshares Inc. is another bank on the low end of the efficiency ratio scale. Sandler O'Neill analyst Brad Milsaps attributed the low figure to the fact that ServisFirst does not have a large network of branch or retail locations. Instead, the business-focused bank spreads it commercial lenders around each of its markets for a more efficient strategy, Milsaps said.

On the expense side, executives said that "overhang" from the bank's latest deal, five new office openings and the lack of material loan sales or securities gains impacted the ratio for the first quarter.

More broadly, Scouten said that the efficiency ratio is an "exclusionary" metric for many investors who tend to raise concerns only when the figure is abnormally high or low. "Some of these banks have taken a long time to work past the last cycle and haven't really gotten the cost out of their banks," he added. 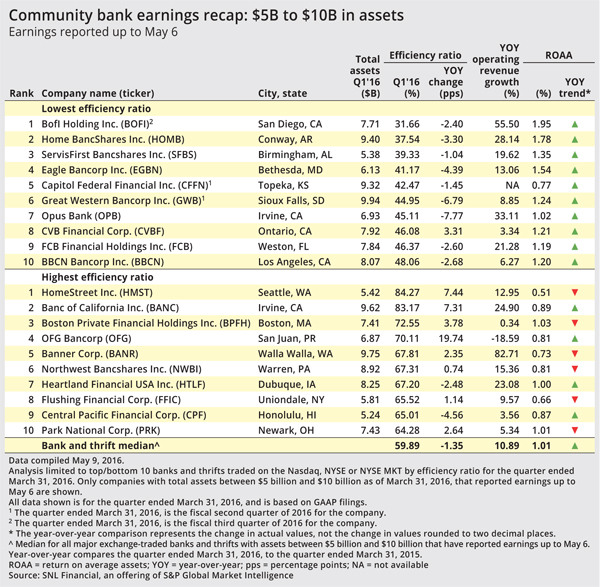