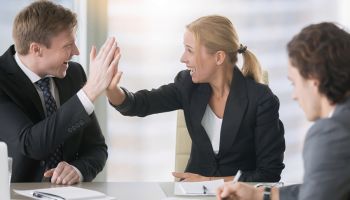 So much that has been written on why banks fail focus on compliance and technology issues, or even a lack of strategy of how to acquire new business. However, oftentimes the problem can come back to the cultural environment within the bank.

A recent study of a struggling midsize bank on the east coast with more than 100 branches showed that the major reason for the bank’s struggles was that employees did not feel excited about their work place environment. Employees reported that their morale was low with frustrations with management, one another and the overall environment.

The complaints surprised a new management team, as it had little to do with the performance of the bank on the surface. When the new CEO came in, she thought her focus was going to be to streamline costs and to see where the strategy for reaching and developing customers needed work. What she found instead were basic fundamental problems with managing “human capital”, that is people. Here is what she found, and this is how she went about changing the bottom line.

One of the key motivations for workers is a fair reward system. High performers want to know that they will be rewarded for working harder and being more productive than poor performers and that was not the case at the bank. For example, one employee reported that she had heard that all employees get the same merit pay raises regardless of how well they do at work. Either that was the case, which discourages motivation and hard work, or it is was not the case but employees believed that it was.

Either way, it had the same effect on the workers since they believed it. Not only was the reward system clearly broken, the performance management and resource allocation process did not nonexistent. People did not know what was true, the perception was that things were unfair, and there did not appear to be any logic to rewards to speak of in place.

Lack of Camaraderie, Especially with New Employees Caused Major Turnover with Those Hired for Crucial Functions

Workers also described a culture of back stabbing, and a lack of camaraderie with 39 people wanting to speak to the new head of the bank one on one about the environment. A young employee that had been there for about a year came out and called the other people mean. One woman mentioned that she does not get feedback from other employees, but they make her feel like she does not do anything right.

That lack of transparency with employees coupled with the fact that employees felt that they did not get good formal feedback on their performance made it very difficult to be motivated. The same woman that expressed the lack of feedback also said she yearned for acknowledgement. This all led to a lack of motivation to defend the organization and depend on one another.

The good news was that employees actually showed through their complaints that they actually wanted things to change, and they wanted to feel good about what they did. While the new CEO had an uphill battle due to budget cuts and staffing issues, there were some things that she changed right away.

The first thing she did was to try and create a culture of having strong confidence that the work that they do matters, and seek to make it commonplace to defend what the group was doing. Since people want to feel good about what they do, she began by creating a mission statement, casting a vision and instilling strong messages of purpose.

What these people do should make them feel incredibly important, and so it was a good place to start by reminding them that their work matters. She reinforced the message by sighting recent business loans that helped the community grow, and initiatives to help underserved members of the community make it easier to open up bank accounts. She made sure that logos and slogans about serving customers were implemented and part of the culture, and put out ambitious group goals to rally behind such as providing the best professional service in the northeast.

Secondly, she created incentives to bond as a group, attempting to build team work. Group goals and visions are important for morale and purpose. Since budgets were tight, she encouraged bonding by giving out awards for helping new employees, and teamwork awards to reinforce the concept of working together. Awards were given such as a free dinner at an expensive restaurant and some other perks that recognized and encouraged the norms of helping reinforced this type of environment while costing little. Additionally, she implemented a mentoring program where a few of the people that really had bought into the new vision helped newer employees adjust to the environment.

Lastly, she implemented formal and informal review processes that provided constructive feedback, and resulted in compensation commensurate with production. People want to be challenged, and know where they stand. They also want to grow. It is interesting that in many case studies focused on employee motivation, there are less complaints about long working hours and the challenges of the hard work and more complaints that they do not feel affirmation from management or their colleagues. She made sure that there was open communication, so that not only was there feedback given to individuals, but also the employees continued to have a way to be heard and to be included in the process of making the working environment more productive.

People need to know where they stand, and also where a company or organization is going. She built on this with periodic meetings with the staff so that people could comprehend what was happening and to feel a part of where things were going.

Make Sure There is Buy In at Every Level

The key to each of these steps was to consistently deliver on the formal changes such as comprehensive reviews, mentor programs and awards that reinforce the values that she wanted to be commonplace among the employees. Additionally, she focused on a system that could really monitor that employees were not just complying with these changes, but they really believed in the environment that she was looking to create.