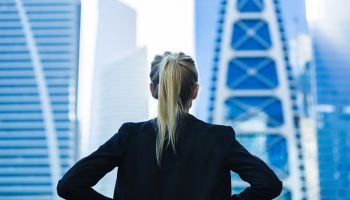 “Over the next ten years, we will see a number of very significant disruptions in financial services—let’s call them Uber moments.”

Former Barclays CEO Antony Jenkins delivered that statement in 2015, and his ominous warning proved prophetic. Today, significant disruption is underway in the financial services industry. Branchless banks have surged in popularity, putting the value of brick-and-mortar locations into question; consumers are becoming more comfortable with faceless digital communications, and millennials—who are on the cusp of surpassing baby boomers as America’s largest generation—carry the reputation for disliking the traditional authority and inefficiencies of big banks.

Will financial institutions follow the route of taxi cabs, hotel chains and Blockbuster? New research reveals that the future of finance may not be so dire.

For the 2018-2019 World’s Simplest Brands study, Siegel+Gale surveyed 15,000 people across nine countries to evaluate brands and industries on their perceived simplicity. Findings indicate growth in the banking sector—in global rankings, it climbs to the number 15 position; in the United States, it rates as the ninth simplest industry.

One of the most disruptive financial brands in recent years, online-only Ally Financial is the lone bank to crack the Top 20 in the United States. According to CMO Andrea Brimmer, “simplicity is at the core” of the brand, and its “ongoing promise is to solve for customer pain points, many of which revolve around complexity in the financial services sector.” With high-interest savings rates and robust customer service, it’s no surprise Ally is a consumer favorite. Interestingly, straightforward brands like Ally, as well as online payment giant PayPal, eclipsed traditional brick-and-mortar institutions like Chase, Citibank and Bank of America.

Across the pond in the United Kingdom, consumers rated relative newcomer Metro Bank as the eighth simplest brand. The first new High Street bank in over a century, its unique model offers Britons a more convenient way of banking: stores are open seven days a week, 362 days a year, and its customers benefit from a London-based 24-hour help center. Metro Bank even implemented a canine-friendly policy, the founders’ theory being that if your pup likes going to the bank, then you will too.

In Germany, up a dramatic 45 spots is no-frills, online bank ING-DiBa. Since purchasing its first stake in Diba in 1998, the bank has claimed the role of challenger in the German retail banking market. And with great success—the Frankfurt-based subsidiary has more than 8 million customers and scores high as a retail bank, even faring better than titans like Deutsche Bank. Also, unlike rivals hindered by archaic technology, shrinking margins and expensive branches (that are even costlier to close), ING-DiBais also profitable.

Whereas no single banking institution permeated the US Top 10, collectively, American banks stepped up to meet shifting consumer needs. By focusing on nonphysical aspects, like digital experience, these brands have helped transform financial services into a Top 10 category. Remarkably, the inverse occurred in Europe: individual brands like Metro Bank and ING-DiBa rose to the top, but overall, the banking industry did not make noticeable progress.

An increasing dependence on mobile technology, coupled with a declining desire to interact with human beings “IRL,” has led to the simplification of an inherently complex industry. According to a recent consumer survey by PwC, more than half of all smartphone users report using mobile banking in some form. Moreover, over three-quarters of millennials bank exclusively by phone. Corporate chains have been experiencing the pains of growing Gen Z and millennial populations and banks won’t be immune from generational fallout either. A Scratch studyreveals all four leading banks are among the least-loved brands by millennials, and 73% surveyed said they would be more excited about a new offering in financial services by brands like Google and Square, instead of their bank. Simply put, giant corporations do not appeal to a generation raised on instant gratification.

However, even though branches are seeing less traffic than they have in decades, the majority of people still feel it’s essential for their bank to have a physical location. In the future though, the meaning of branches could refer to sophisticated ATMs or shared workspaces for small businesses. It could even mean your local coffee shop. To market a relationship-based banking experience to millennials in a way that speaks to their needs, Capital One opened a string of cafés across the United States that also function as public co-working spaces. Anyone, regardless of bank affiliation, can buy a cup of coffee, connect to free Wi-Fi and take advantage of complimentary money coaching sessions.

Whereas industry trends ebb and flow, one fact remains—simplicity pays. With 55 percent of people willing to pay more for simpler interactions, the financial services industry will need to invent ways to connect with new generations of consumers. Can these institutions evolve from inflexible, analog monoliths into modern brands that deliver tailor-made physical and digital experiences? Time will soon tell.