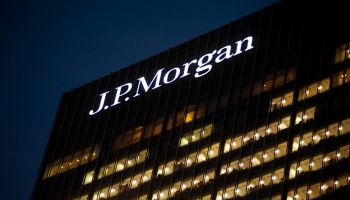 Third quarter profits rose an impressive 8% year over year with 9.1 billion in quarterly profit. Just as impressive, the bank did not grow by cost cuts as the revenue also grew at the same pace. Analysts were off by $1.6 billion in revenue estimates.

The growth came primarily from the retail sector of the bank that included credit cards and loan business. JP Morgan, perhaps best known for its investment banking side, has done well across the board.

The stock rose more than three percent on the news. While investors in banks anticipate a challenge in profit margins due to lower interest rates, it was ironic that JP Morgan actually sited their consumer side as the catalyst for growth.

The bank has bucked the trend of banking stocks that have trailed the S&P index in terms of performance. Perhaps the bank lowered expectations by warning the negative effect lower interest rates might have on earnings.

In a press release, Jamie Dimon said, “The consumer remains healthy with growth in wages and spending combined with strong balance sheets and low unemployment levels. This is being offset by weakening business sentiment and capital expenditures mostly driven by increasingly complex geopolitical risks, including tensions in global trade.”

Net interest income also bucked the trend compared with other banks exceeding $14 billion. Dimon also mentioned that consumers are paying debt off on time at a reasonable clip despite borrowing more.

On a related note, reports show that the housing market is showing signs of limited inventory, which could be a potential sign for value growth in the real estate sector. The reports do not necessarily help the banking industry, however, as the mortgage business could still be driven primarily by refinancing at lower long term interest rates by home owners rather than new owners entering into the market.

Dimon’s statement also continued to have words of overall caution, mentioning the geopolitical climate. The market does not like uncertainty, and having a president that could be impeached in the same year as a presidential election could rattle the markets despite the recent trend of the stock market being immune to political turmoil.