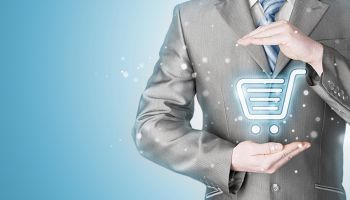 Even with an unfavorable court ruling and a hostile Republican party in control, an embattled agency created by the Dodd-Frank Act remains as active as ever. But the agency's targets have capitalized on the new environment, more frequently challenging enforcement actions in court.

The Consumer Financial Protection Bureau, a regulatory and supervisory body with wide authority to enforce consumer protection law, has attracted criticism from the Republican party since its creation. With Republicans in control of the legislative and executive branches of government, S&P Global Market Intelligence analyzed 181 CFPB enforcement actions to gain insight on the Bureau's priorities as it faces the prospect of drastic reform over the next year.

In the 2017 first quarter, the agency announced 17 enforcement actions, up from 13 actions in the previous quarter and eight in the year-ago quarter.

"They have not slowed down. Right after the election and before the inauguration, I think they sped up because there was a real concern about what the agency would look like," said Maria Earley, a former CFPB attorney who is now a partner with Reed Smith, a law firm that often represents financial services companies.

But the agency is finding more resistance from the companies targeted in its enforcement actions. In January 2017, TCF Financial Corp. became the first bank to fight the CFPB in court over a case alleging the bank charged excessive overdraft fees. Over the last two quarters, the CFPB has announced 30 enforcement actions. Of those, 11 actions, or 37%, will be litigated in court as opposed to an immediate settlement. Prior to the 2016 fourth quarter, just 23% of the Bureau's enforcement actions were challenged in court.

"The willingness to fight back has increased," said Oliver Ireland, a partner for Morrison & Foerster, a law firm that represents financial companies. 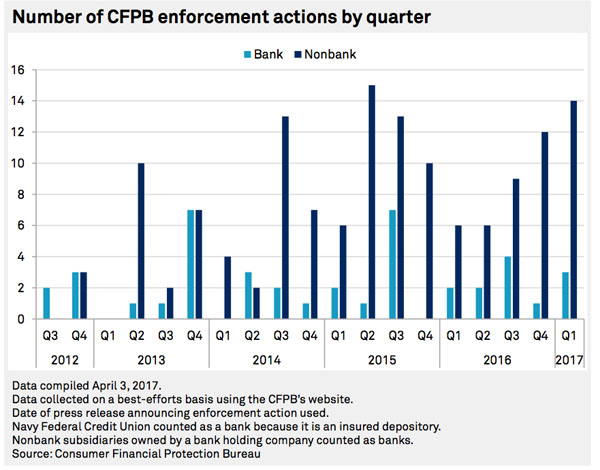 Critics of the Bureau secured a big win in October 2016 when the U.S. Court of Appeals for the District of Columbia Circuit found that the agency's structure was unconstitutional while ruling on a case involving PHH Corp.

That finding has been temporarily vacated by a review from the same Appeals Court, which means nearly all of the Court's judges will weigh in on the decision. The en banc ruling, which will likely bring finality to the case, could come as early as July but could be delayed until 2018, lawyers say.

On Capitol Hill, Republicans have advanced legislation in the House of Representatives that would overhaul the Bureau. The Financial CHOICE Act would rename the Bureau and charge it with ensuring competitive markets as well as protecting consumers. It would subject the Bureau to the congressional appropriation process for funding, as opposed to drawing funds directly from the Federal Reserve.

It would also eliminate the agency's supervisory function, its market-monitoring function and its authority to prosecute financial institutions for practices that are "unfair, deceptive or abusive," also known as UDAAP. [Editor’s Note: See the analysis by compliance expert Richard Riese concerning the unintended consequences of the UDAAP provisions.]

Industry groups say regulatory enforcement of UDAAP represents a burden and can stifle innovation. They say the CFPB has failed to provide clarity about what is abusive prior to filing an enforcement action. Concepts of "unfair" and "deceptive" have legal precedence, but the "abusive" charge was introduced by Dodd-Frank.

"Things that the industry has done for many, many years all of a sudden people are getting fined for," said Jan Steiger, executive director of the Receivables Management Association, which represents debt collections agencies—a favored target of the Bureau. "To me, that's unfair."

But University of Utah's Christopher Peterson, a law professor and former CFPB senior counsel, said it was part of CFPB's mission to apply new legal interpretations to existing law and to do so in a way that better protected consumers.

"Bankers need to stop being such babies," he said. "The financial industry crashed our economy, and Congress responded to the public outrage and the millions of families displaced from their homes with an agency that would apply a new standard and look out for consumers."

According to Peterson's review of CFPB enforcement actions through 2015, most UDAAP actions do not involve the "abusive" claim.

For the agency's defenders, the Republican legislative effort to reshape the Bureau would enable a repeat of the abuses prevalent before financial services crashed the global economy in 2008.

"We've been there, and we got the financial crisis. We don't need to be hypothetical about that," said Prentiss Cox, a law professor at the University of Minnesota.

For the CFPB's critics, allowing the agency to continue with its current enforcement agenda is inflicting a different type of harm on the economy.

"Sometimes what is lost is that consumers are also hurt if you scare people out of providing services and products," said Hester Peirce, a senior research fellow at George Mason University's Mercatus Center.

No matter the outcome of the PHH case, Bureau Director Richard Cordray appears to be in the last year of his job. Republicans have called for Trump to fire the director, whose term will expire July 2018. Cordray appears keen on going out swinging, and more companies appear up for the fight.

On April 20, the CFPB sued Ocwen Financial Corp. after previously securing a consent order over the servicer's handling of foreclosures. The CFPB was unsatisfied Ocwen had fixed its problems, but Ocwen refused to settle this time around and will take the matter to court. The company's shares tumbled more than 50% on the news. At least for the time being, companies need to remain wary of the CFPB's big stick.