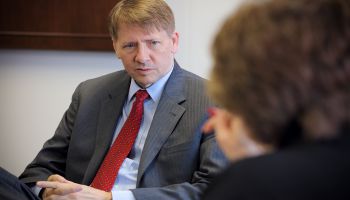 Attorney Lucy Morris heard CFPB Director Richard Cordray speak at a conference recently. He was asked what his post-bureau plans were and, as usual, he demurred, she said. But then the question turned to what he had left on his to-do list before he departed his post.

“You know,” she recalls him saying, “I don’t think there is anything else.”

On Nov. 15 Cordray announced in an email to CFPB staff that he would leave office before the end of November. That will bring to a close a term marked by cheers and jeers leading an agency that was as unpopular in some circles as Obamacare is in others (and vice-versa).

Morris is well situated to appreciate where Cordray was coming from. Today she is a partner with Hudson Cook, LLP, in Washington, but from 2011-2014 she served as CFPB’s Deputy Director of Enforcement, actually pre-dating Cordray’s arrival.

For much of his term the bureau was not only inventing itself, and its often contrarian ways of regulating, but developing and implementing a huge array of post-crisis regulations in mortgage lending and much more. Among the most recent acts under Cordray’s watch was finalization of CFPB’s small-dollar lending rules, somewhat amended from the initial bureau vision, and the arbitration rule, finalized but ultimately struck down by use of the Congressional Review Act.

“I think he felt that he had checked off all the big tasks and that that was the best time for him to leave, assuming he’s going to run for governor,” says Morris. [The latter goal, for Ohio, has not been confirmed by Cordray but has been much rumored.}

She says Cordray came aboard after serving as Ohio’s attorney general, and continued in that vein as a powerful law enforcement officer in many ways. He established the bureau’s record for “regulation through enforcement,” which drove the need for compliance officers and others to parse every decision and every settlement for guidance regarding what was expected—although the bureau under Cordray issued ream upon ream of proposals, reports, interim regulations, studies, and more, including the pioneering use of government website blogs.

“The bureau was created out of the financial crisis and it had a clear mandate to do things differently,” Morris says.

Alan Kaplinsky is co-practice leader of the Consumer Financial Services Group, and a partner, at Ballard Spahr LLP, and he believes Cordray pushed enforcement power too far.

“There are some things he did well,” says Kaplinsky, “but a lot I would disagree with him on.” Kaplinsky believes that many of the practices that the bureau attacked were things that Cordray personally objected to, and authorized enforcement on, even if they did not clearly violate any law.

“But he did go after some very bad actors and scams,” says Kaplinsky.

Speculation regarding the changing of the guard at CFPB has a near-term and a longer-term.

The most immediate issue is who will serve as the bureau’s Acting Director until a Senate-confirmed appointee comes in.

Kaplinsky notes that consumer advocates have already begun pushing for the acting post to be filled by Deputy Director David Silberman (who is in that post itself on an acting basis). He explains that they hope that this would ensure continuation of many bureau policies and priorities under Silberman’s temporary leadership.

[Coincidentally, on Nov. 16 Acting Comptroller of the Currency Keith Noreika submitted his resignation in anticipation of the swearing in of Joseph Otting, who was confirmed by the Senate as the new Comptroller. Noreika served just over six months.]

Thursday various publications began reporting rumors of an imminent naming of Mick Mulvaney, director of the Office of Management and Budget, to be temporary head of the bureau. Mulvaney is on record as an opponent of the bureau's existence.

Who will be the Acting Director is one question. Another is who the ultimate nominee for the Director post will be and how long it will take to be confirmed. Senate confirmation of Cordray’s successor is expected to be contentious—powerful Senator Elizabeth Warren is regarded as a “parent” of CFPB.

But once that selection is made and confirmed, Kaplinsky believes that the bureau “will become much more industry friendly.”

Will the interpretation of the mission change?

Many of the people who came to CFPB to fill its many positions could be described as “true believers” in a consumerist mission for a federal regulatory agency. Even among the prudential regulators, over the decades, discernible differences could be seen in attitudes towards regulated players. The old Federal Home Loan Bank Board, which regulated savings institutions and which was supplanted by the Office of Thrift Supervision, was widely regarded—especially among commercial bankers—as a cheerleader regulator.

Not so CFPB. Clearly its role was as consumer advocate. Morris says that when she left the agency to enter private practice, a fellow bureau staffer said a curious thing: “It’s a good thing that you are leaving, because we need people out there keeping us honest, making sure we do things right.”

Morris says that institutions wanted to avoid “getting crosswise of the bureau,” especially in its earliest days.

Morris and Kaplinsky have somewhat differing views of what will happen under a Trump-appointed CFPB Director.

Kaplinsky, who has been something of a gadfly to the bureau, thinks “we will see less of the bureau pushing the envelope in enforcement actions.” He predicts a greater focus on scams and out-and-out fraud.

“I think we’ll see much less [new regulation],” he adds, and there might even be efforts to rollback or ease some rules put in place during Cordray’s term.

In the area of supervision, Kaplinsky expects to see less change.

Kaplinsky thinks there will be a two-tier impact on bureau personnel once the leader is finalized. Bit by bit the senior leaders of the bureau will depart, he predicts. This will lead to change in how the mission is carried out, as they are replaced by people selected by a Trump-appointed Director.

“It happens all the time” in government, he explains.

Again, on the supervisory level, the examiner “boots on the ground” staff, Kaplinsky does not see nearly as much turnover. He says at that level there are fewer employees who are “true believers.”

“It’s a job for them,” says Kaplinsky.

Morris acknowledges that a Trump appointee will come at the job differently than a Democratic pick. A very conservative Director could really slow things down internally.

However, she adds, “in my experience, that doesn’t happen as much as most think it might. The new person is responsible for what happens on their watch.”

Morris adds that CFPB’s senior staff is very dedicated to the agency’s mission, and even after Cordray leaves, their legal authority will not have changed at all with his departure. She says the bureau has many true believers who are also strong lawyers.

Read blogger Nancy Derr-Castiglione's "Looking on as Cordray steps down"