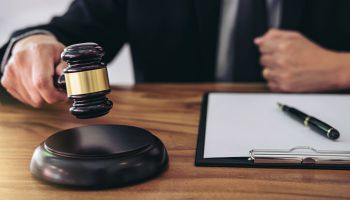 The CFPB, a regulator created by the Dodd-Frank Act to oversee protection in the financial sector, was an active litigant under Richard Cordray's leadership. After Cordray resigned in November 2017, Trump appointed Office of Management and Budget Director Mick Mulvaney to lead the bureau.

Mulvaney has been a vocal critic of the bureau and at one point suggested terminating it. In his new role, Mulvaney immediately instituted a 30-day freeze on hiring, new rules, regulations, and civil money penalties. On Dec. 21, 2017, the CFPB announced that it would rewrite a rule on prepaid cards and would not issue penalties for errors in reporting mortgage data.

"We had a rather significant enforcement matter that went into suspension mode when Mulvaney took over because of some kind of directive that happened at the CFPB," said Richard Gottlieb, a partner with Manatt Phelps & Phillips. "It was resolved with nothing [happening]."

Attorneys general to step it up

But financial institutions should not expect to avoid litigation altogether.

Gottlieb and others say several state attorneys general have essentially replaced the CFPB. On Dec. 12, 2017, a group of 17 attorneys general wrote a letter to Trump denouncing the appointment of Mulvaney and promising to "redouble" their enforcement efforts should the CFPB pull back in any manner.

Alan Kaplinsky, a partner with Ballard Spahr, said many states are already delivering on that pledge.

"There's nothing really happening at the CFPB right now in the way of new investigations. All the activity is at the state level," said Kaplinsky, who represents financial institutions on consumer law matters. "Net-net, I feel that there's as much going on as there has been all along."

Kaplinsky said many financial institutions cannot avoid state-level litigation with a change in business strategy because the most active attorneys general are in large, lucrative markets: California, New York, and Illinois. Those three states have been vocal about their plans to pursue consumer protection regardless of what is happening at the federal level.

"As President Trump handicaps the federal consumer watchdog, we in California are, in fact, ramping up our fight for working families, students, seniors, servicemembers, and veterans," a spokesman for the state's attorney general wrote in an email to S&P Global Market Intelligence. "Attorney General [Xavier] Becerra is committed to protecting hardworking Americans."

New York Attorney General Eric Schneiderman promised that attorneys general "won't hesitate to protect those we serve—with or without a partner in Washington."

"We will continue to do that," Thompson wrote.

The CFPB's enforcement actions focused on new laws that were introduced as part of Dodd-Frank, a sweeping piece of legislation that changed much of consumer finance regulation. Industry groups have decried the CFPB's enforcement of some provisions as unreasonably onerous. Although the CFPB is now on hold, this does not mean financial institutions are in for a reprieve from Dodd-Frank provisions.

"It's just as draconian, just as bad, because under Dodd-Frank, the state AGs can enforce federal law on top of state law," Kaplinsky said.

More aggressive consumer protection efforts at the state level will require more attorneys, and the CFPB—staffed with investigators and lawyers suddenly facing a lighter workload —could be a source of talent.

One lawyer, a former CFPB attorney currently in private practice, shared a recruitment letter from the California Attorney General's office advertising openings in consumer protection and other areas of enforcement. On the office's job page, there are 21 openings listed for various "deputy attorney general" positions.

Kay Hoppe, a legal recruiter based in Chicago, said law firms have been more aggressively recruiting attorneys in preparation for additional financial enforcement actions. "We are called by law firms when they feel that either at the SEC or the U.S. attorney offices or the state [attorneys general] offices that there is going to be additional activity," she said. "And I have definitely noted additional activity."