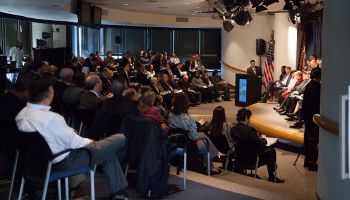 Since its beginnings, the Consumer Financial Protection Bureau has favored many forms of engagement with various stakeholders, including such efforts as town hall meetings and field hearings.

The next area Acting CFPB Director Mick Mulvaney is seeking input about is the bureau’s various forms of external engagement. This is CFPB’s fifth request for information on aspects of its operations as Mulvaney continues to subject the bureau to its own in-depth re-examination.

At the bureau, engagement covers a wide range of activities, including field hearings, town halls, roundtable discussions, and public meetings of the bureau’s advisory board and its councils. CFPB currently has four formal advisory groups: the Consumer Advisory Board; the Community Bank Advisory Council; the Credit Union Advisory Council; and the Academic Research Council. The first is required by the Dodd-Frank Act and the rest were established by CFPB decision.

It is not unusual for federal banking regulators to have standing or ad hoc advisory councils.

The bureau announcement poses seven specific areas of inquiry, though they are not meant to exclude others. The bureau plans to publish the notice in the Federal Register on Feb. 26.