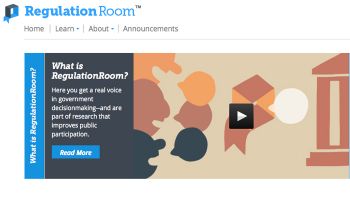 We all know that we should be writing comment letters to regulatory agencies expressing our opinions about regulatory proposals that affect our institutions.

The trade associations as well as the traditional regulators have been telling us for years how important it is to send in those comment letters and how carefully they read and consider that input.

But, frequently we don’t find the time—or make the time—to submit those comment letters.

It’s not that we don’t care.

We’re too busy implementing the last dozen or so regulatory final rules that have been issued. No time to worry about the ones that haven’t even been finalized yet.

The problem is that if we in the banking industry don’t comment on proposals relating to consumer regulations, the regulators are going to focus more and more on the input they are receiving.

And that is from consumer groups and from the consumers themselves.

The Consumer Financial Protection Bureau is taking greater effort to solicit input from individual consumers and interested groups that have traditionally not participated in the rulemaking process before.

Have you visited “The Regulation Room”? It’s just one example of the bureau’s outreach efforts.

CFPB Director Richard Cordray spoke at a conference of the American Bar Association in April, where he talked about a partnership with Cornell University’s “Regulation Room.”

The “Room” is an online forum developed by the University to facilitate the public comment process for federal regulations. It is designed to attract more public participation in the government regulation process. It does so by giving notice of key regulatory proposals of interest to consumers; providing a summary of the key issues in the proposal; organizing an online forum for gathering comments about the proposal that are then submitted to the agency for consideration.

The consumer doesn’t even need to use a stamp.

Proof is in the participation

Cordray says that Cornell’s Regulation Room “produces a level of engagement that deepens knowledge on both sides, and allows citizens to participate in rulemaking by means of a controlled forum.”

When the Regulation Room was used for the proposed debt collection regulation, the CFPB received 900 comments from that site. The participants who use the Regulation Room site are, for the most part, people who have never previously submitted comment letters or participated in the rulemaking process.

And they are the people CFPB is most interested in hearing from.

Bankers are running out of excuses

The reasons for not commenting are actually coming to be fewer and fewer. The regulators are making it easier to submit comments. Online comments are accepted. Again, no need to use a stamp. Comments don’t have to be lengthy.

Comments don’t necessarily even have to be original.

Even if you are just adding your “vote” to an existing position, that contributes to the volume of commenters who are expressing that particular position.

But what does help are specific examples and data that support the position that you are proposing. CFPB is a data-driven regulator and is more swayed by facts and data that emotional arguments. (For examples of American Bankers Association comment letters, click here.)

The key is to comment on proposed regulations. Good intentions don’t reach the regulators.

If we in the banking industry want to have any input in the outcome of the consumer protection regulations that are being created, we need to redouble our efforts to provide feedback to the regulators through comment letters and other forums (like the Regulation Room).

CFPB, for one, is seeking out and listening to consumers about what they want to see in the regulations.

If banks don’t provide input, we shouldn’t be surprised when the regulations don’t reflect the banking industry perspective also.

More in this category: « UDAAP and fair lending widen exposure Has risk assessment grown out of hand? »
back to top