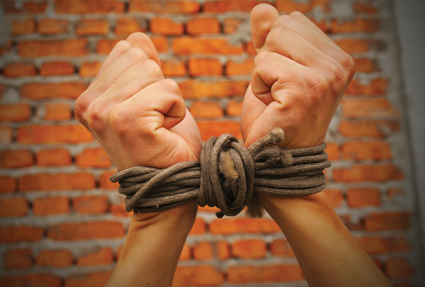 It can’t happen here” may help you sleep at night, but just because your bank doesn’t do business in places like San Diego or New York City doesn’t mean that it’s not going on in your markets—and the proceeds potentially going through your bank.

“It” is human trafficking, which covers both smuggling illegal aliens into the U.S. and enslaving women and children for the sex trade and all people for forced labor.
Close to home, wherever home is
While many bankers may think of human trafficking as an issue in large cities, all size towns in all areas of the U.S. find this issue very close to home, warned Anna Rentschler, vice-president and BSA officer at Central Bancompany, during the Money Laundering Enforcement Conference sponsored late last year by ABA and the American Bar Association.

Rentschler, moderating a panel, told listeners about cases involving prostitution and worse in communities in the Midwest, arising through human trafficking. The region, being the crossroads of the nation, “is a ‘wonderful’ place to drop off people,” said Rentschler. She noted that so much trafficking goes through the region that long-haul drivers have united through www.truckersagainsttrafficking.com to teach the warning signs of trafficking, and how truckers can intervene.

Victims come from our own cities and towns—runaways, for instance—as well as from overseas. Rentschler said that major natural disasters have left thousands destitute around the world, and some affected people become prey for importers of people—essentially modern-day slavers trading on their inability to support themselves or their families any other way.

Some victims are lured by faked romance, and held in hellish circumstances through fear. Debt bondage holds others, with debt for being smuggled into the U.S., or other purposes, keeping them enslaved. Often victims lack valid travel documents, and have had the faked ones used to bring them to the U.S. taken, so they have nowhere to flee.

Speaking of traffickers’ means of disposing of their ill-gotten cash, Michael Tutko, section chief in Homeland Security Investigations’ Human Smuggling and Trafficking Unit, warned bankers that their laundering methodologies were pretty standard. They go in for wire transfers and other “traditional methods,” such as bulk cash smuggling.

“And if it isn’t bulk cash smuggling, they’ll do it through your bank or something like Western Union,” said Tutko.

Bankers also heard from a JP Morgan Chase expert who discussed how his bank developed typologies that have helped the bank’s investigators to identify traffickers and their victims.
Trafficking’s grim trail
Human trafficking for the purpose of forced labor happens more frequently, measured by number of victims, than does trafficking for the sex industry, according to Tutko. The penalties for the latter are tougher than the former—asset forfeiture is frequently sought by the authorities and can be used to recompense victims. Forced-labor trafficking can bring imprisonment of up to ten years, whereas sex-trade trafficking sentences start at ten years—15 years if the victim was under 18 years old.

Perhaps the most tasteful way to summarize the crimes described or merely hinted at in regard to enslavement was used by Rentschler. Trafficking has become a big interest for the gangs, because you can only sell a quantity of drugs once, but sex slaves can be sold over and over again. The details provided by Tutko, even muted as they had been for presentation, were horrific.

When Tutko and fellow investigators break into houses used by traffickers, the scenes they find go beyond sordid. “The fear that’s in these people’s eyes…,” said Tutko. “They are scared to death, and rightfully so.” Frequently they have been beaten and wounded in order for their captors to keep them in line.

Many of the investigators’ leads come from non-government organizations, private industry, and law enforcement personnel who see something that makes them think twice. A police officer summoned to a domestic dispute may believe that he is witnessing a pimp beating a prostitute, not a husband beating a wife, and can report it to federal authorities. Tutko said his organization depends on such eyes and ears, because frightened “trafficking victims don’t self-identify.”

One of the cases Tutko discussed amply illustrates the kinds of crimes going on. The Carreto family, a Mexican mother and three sons, plus associates, ran a sex-trafficking ring between Mexico and New York City for 13 years. One of the sons would romance the women, convince them to follow him to the U.S., and hold out marriage and “the American dream” as the bait. Many women already had children, who were left with the mother. Unwittingly, they were leaving hostages.

When the ring was busted in 2004, 25 women then in captivity were freed.
Typing the criminals
Initially, JP Morgan Chase investigators dug into the trafficking challenge like researchers, combing industry articles, records of criminal prosecutions, and case studies, and talking to various experts.

Then a big break came. Investigative staff had the opportunity to interview a woman who had first been “trafficked” by her captors and who had then been graduated onto the money-laundering side of the operation. She knew much of how her abusers had run their business.

“She gave us Craig’s List,” said Phillip DeLuca, compliance managing director in the bank’s corporate AML Operations/Legal & Compliance section. That website, DeLuca explained, has frequently been used for sex-trade advertising. At the time, this revelation gave the bank a lever to apply to the data analysis methods it had been using to develop typologies that would indicate potential trafficking or activities linked to trafficking.

DeLuca explained that a bank like Chase generates huge amounts of data, and that detailed typologies must be developed or far too many hits will result. He described one stage of the bank’s process as “finding a needle in a world of haystacks.”

“It’s all very under-the-radar activity,” DeLuca explained. Transactions run between $1,000 and $3,000, typically—which, by dollar amount alone, could be nearly anything. So that won’t work.

Many factors have gone into the typologies developed. Patterns include items such as anyone who makes over 100 payments to Craig’s List using a debit card. The bank also analyzed many industries to see what types of businesses could be exploited by traffickers to hide flows of money from their crimes. Retail customers with frequent charges at after-hours bars and similar businesses were also analyzed. Along the way, DeLuca learned of a website far more explicit than anything on Craig’s List that he called “Craig’s List on Steroids,” which the bank used to pull out transactions. Use of foreign internet providers was also stirred into the mix.

Realizing what they were working against, DeLuca said that his staff “became extremely energized.” At one point, he said, he became confident enough to feel as if he could tell enforcement agencies he works with, “If you can tell me the how, I can probably tell you the who.” •

You can listen to the event through ABA’s vendor http://aba.peachnewmedia.com/store/provider/provider09.php

♦ Customers with excessive number of accounts.
♦ Businesses and industries easily exploitable by traffickers, such as immigration attorneys or labor intermediaries that handle visa paperwork.
♦ Consumer customers with discrepancies between account funding and known customer profile.

♦ High volume of round-dollar deposits via wires, ACH, or cash in the range of $2,000-$3,500.
♦ Excessive interstate or intrastate cash deposits less than $1,000 each at multiple branches daily.
♦ Cash deposits just below the currency transaction reporting threshold but deposited at several branches.