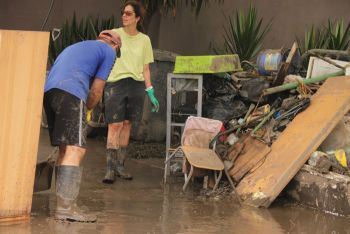 More than two years since making the proposal, the federal regulatory agencies have finalized and issued two more questions and answers for the Interagency Flood Insurance Q&As. Three more Q&As, dating back to the 2009 proposal, are still under consideration, and have been re-proposed for public comment.

The two new Q&As deal with the issues of “insurable value” for purposes of determining the amount of flood insurance coverage required, and how quickly a lender is required to force-place flood insurance after the 45-day notice period ends. The three proposed Q&As also involve the force placement-process and the 45-day notification period.

The original flood Q&A guidance was issued in 1997 by the Comptroller’s Office, FDIC, the Federal Reserve, the National Credit Union Administration, the erstwhile Office of Thrift Supervision, and the Farm Credit Administration. In July 2009, new and revised Q&As were issued that updated and expanded the earlier guidance. At that time, several proposed questions were published and comments sought. Finally, on Oct. 17, 2011, the agencies (minus the OTS) issued the two final Q&As and three proposed Q&As.

The September 2007 FEMA Mandatory Purchase Guidelines say that flood insurance is required for the smallest of the following:

• Outstanding principal balance of the loan.

• The “insurable value” of the building (which is equivalent to 100% replacement cost).

New Q&A 9 describes in more detail the meaning of “insurable value,” with the intent of expanding the options available to lenders and borrowers. (Q&A 10 from the 2009 Proposed Q&As has been eliminated, but portions of that Q&A have been absorbed into Q&A 9.)Insurable value generally should be obtained from the replacement cost value on the Hazard Insurance Policy, or the appraised value, if it is based on a cost-value approach and not a market value. It also can be obtained from a construction cost calculation in the case of construction loans. The final Q&A has added a fourth choice of “any other reasonable approach, so long as it can be supportable” (read: documented and reasonable).

The bottom line: Lenders now have some guidance with more flexibility in determining a property’s insurable value. When a property located in a special flood hazard area is unusual or complex, it would be prudent to get help from knowledgeable insurance professionals.

Some of the commenters to the 2009 proposal requested a specific number of days (for example, five days) after the 45-day notice period as a safe harbor cushion to allow for obtaining the force-placed insurance. The agencies decided not to offer a specific cushion. Instead, they offered guidance that has flexibility, and which also puts the burden on the lender/servicer to justify any delay. Any delay in obtaining force-placed flood insurance should be brief, and lenders/servicers would be expected to provide a reasonable explanation for the delay. For example, if a lender/servicer uses batch processing for groups of loans, a small delay would result.

The bottom line: Lenders/servicers are expected to have policies and procedures in place to ensure that flood insurance is obtained as soon as possible after the 45-day notice period ends. However, if there is a brief delay in obtaining the insurance, the lender/servicer should document a reasonable explanation for the delay.

Three questions relating to force placement remain on the table for further discussion and comment. They will be finalized at a later date.

• One proposed Q&A (60) ad-dresses the issue of when the force-placement notice should be sent.

Previous guidance (in Q&A 57 and 2009 proposed Q&A 60) indicated that lenders/servicers were not permitted to send the 45-day notice of force placement until after the flood insurance was elapsed or determined to be inadequate.

In other words, it was not permissible to get a jump on the process by sending the notice to the borrower before the policy had lapsed or determined to be inadequate, because the borrower could come in at the last minute with the required insurance. Any attempt to shorten the 45-day notification period would not be acceptable.

• The revised proposed Q&As 57 and 60 retain the direction to lenders/servicers to send the 45-day notice upon making a determination that the flood insurance coverage is inadequate or has expired.

However, the agencies have added a “recommendation” that lenders/servicers also advise borrowers when flood insurance is about to expire. This would be an additional notification prior to the 45-day notification letter that is already required. This also would be in addition to notifications from the insurance company to the borrower informing them that the policy is due for renewal.

• Proposed Q&A 62 addresses the issue of when a borrower be charged for the cost of force-placed insurance covering the 45-day notice period.

When Q&A 62 was proposed in July 2009, the agencies said that lenders/servicers were not allowed to charge borrowers for a force-placed flood insurance policy during the 45-day notice period. Therefore, there would be a 45-day gap in insurance coverage during the notice period, or the lender/servicer would have to pay for that portion of the coverage itself.

The new proposed Q&A 62 reverses that opinion and states that a borrower may be charged for insurance coverage for any part of the 45-day notice period in which no adequate borrower-purchased insurance coverage is in effect, provided the borrower has given express authority for such coverage as a contractual condition of the loan. It is important to check the loan agreement to be sure the lender/servicer has the authority to pass on the force-placed insurance cost.

What should you be doing now about the new Q&A? Here are five steps:

If there are circumstances that do not lend themselves to the use of replacement cost value from the hazard insurance policy or appraised value based on the cost-value approach, it may be time to explore the “any other reasonable method,” now permitted.

3 Review your bank’s flood insurance force-placement process. Determine how soon after the 45-day notice period the insurance is currently being force placed. Is there a delay? How long is the delay? If there is a delay, determine whether there is a reasonable explanation for the delay and document the explanation.

4 Examine the loan contracts. Determine if there are adequate provisions for passing the cost of force-placed insurance to the borrower, including any cost that applies to the 45-day notice period.

5 Review your borrower notices. Determine if the borrower is being informed adequately of the insurance requirements. If and when the proposed guidance is issued, there may be an impact on the borrower notification process.