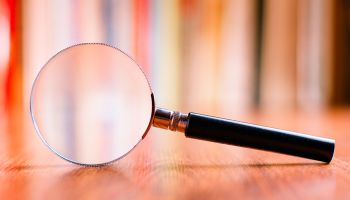 Regulatory relief will be at best a near-term affair, with banks facing plenty of compliance costs in the present tense. Continuity's latest Banking Compliance Index report examines the status quo.

Banking and regulation continue to go together, and the impact of any change in Washington, such as the declaration by President Trump that his administration would go after Dodd-Frank “big time,” plus two White House anti-regulation announcements, may be a ways off from being felt by banks.

Thus far, the general reading of the two Trump administration pronouncements on regulation—the “regulatory freeze order” issued on Inauguration Day and the “one new in, two old out” executive order issued in late January—is that neither applies to traditional federal banking regulatory agencies, and probably not to CFPB—pending the potential loss of its status as an independent agency. [Update: See also "Trump drops first shoe on Dodd-Frank."]

Which leaves banks dealing with the here and now of regulation, enforcement, and compliance.

Since the beginning of 2013 the Regulatory Operations Center of Continuity, a compliance consultancy, has been tracking the cost of compliance and enforcement among banks and credit unions and producing its quarterly Banking Compliance Index. The index measures the incremental cost burden on community financial institutions, including the impact of prudential banking regulators, CFPB, the National Credit Union Administration, FinCEN, and OFAC. (State regulatory action is not considered.)

The latest index, for Q4 2016, holds that the average financial institution used for Continuity’s analysis—$350 million in assets—needed 2.16 additional full-time equivalents to handle the additional compliance burden of fourth quarter regulatory developments. This represents $53,046 in additional compliance-related spending for the average community institution This does not include ongoing burden, just the additional volume of that quarter. The calculation is based on estimates of workload for different types of issuances. 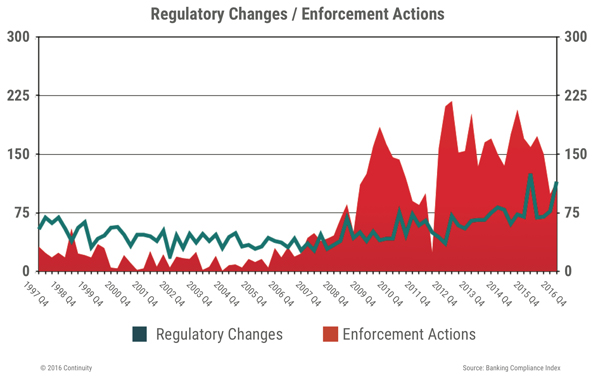 No banker would reject relief, but there are no magic wands that simply make burden go away.

“You can’t just say that there is no regulation at all,” explains Donna Cameron, director of regulatory input/output at Continuity and a former bank compliance officer herself.

As an example, she cites TRID, the TILA-RESPA Integrated Disclosure rule. Under the Dodd-Frank Act, the truth in lending and real estate settlement procedures regimes were merged. This “streamlining” was a major undertaking for banks. If TRID were amended in a major way now—again, this is just a hypothetical—Cameron points out, banks would face a significant amount of work figuring out what those changes meant and then how to comply with the changes.

Looking forward, Cameron sees a fair degree of volatility for compliance staff. “What we can count on is continued change,” she predicts. Even repealing a regulation or law causes work at the bank level, so there will be burden even in regulatory reform.

“I don’t see the ‘good old days’ coming back,” says Cameron, though in the long-term there may be some relief.

“I don’t think that any compliance officers have to worry about not having a job while this is going on,” she adds. Sometimes regulatory change comes piecemeal. Call report revisions have been arriving that way, she points out.

Some analysts have expressed the view that agencies that come under the “one new, two old out” rule will begin regulating via enforcement action, to save their ratios.

That would be an ironical development. A common criticism of CFPB under Director Richard Cordray is that banks must parse every settlement and other enforcement action in order to understand what is expected of them. Bankers often complain that the bureau doesn’t simply publish rules, but uses enforcement to set “rules.”

Cameron points out that aspects of bank compliance can be less than completely defined. A key element along these lines is UDAAP. What is unfair, deceptive, abusive? She says this can be subjective, and many clients seek her company’s views on what does and doesn’t fit.

Beyond such issues there are procedural matters that bankers must deal with in the near future. For example, effective with compliance exams commencing after March 31, 2017, a new Uniform Interagency Consumer Compliance Rating System goes into effect. The current system was adopted in 1980. In the course of revamping the rating approach, federal agencies are moving away from a focus on traditional “check the box” compliance towards an emphasis on compliance management systems. This reflects the evolution of compliance examinations towards how well the bank handles the process, versus technical compliance.

One aspect of the new ratings featured in the regulators’ announcement concerns proactive compliance efforts. The ratings incorporate elements intended to recognize those institutions that work to prevent, self-identify, and address compliance issues on their own. Cameron says the system is intended to emphasis risk-management principles as well.

“This is going to be a real paradigm shift for people and their thought processes,” says Cameron.