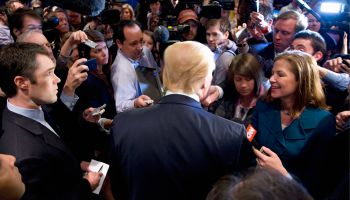 Perhaps testimony to the frenetic pace of the first 100 days of the Trump administration, organizations began issuing responses to the new President’s Executive Order concerning the Dodd-Frank Act hours before the order was formally and publicly signed. It was several hours after the signing that the order was published in full on the Trump White House website.

The announcement had been telegraphed Thursday, Feb. 2, in press statements by Gary Cohn, director of the White House National Economic Council, and former president and COO of Goldman Sachs Group, Inc.

President Trump signed the order on Friday, Feb. 3. In two pages, totaling 417 words, the new leader officially launched his attack on the massive tome that is Dodd-Frank shortly after a gathering of business leaders ranging from JPMorgan Chase’s Jamie Dimon and Blackstone Group’s Steve Schwarzman to Elon Musk of Tesla and SpaceX to GM’s Mary Barra and IBM’s Ginni Rometty.

The latest tally on the American Bankers Association Dodd-Frank Tracker website indicates that as of mid-December 2016 there were 14,720 pages of Dodd-Frank related final regulations and guidance.

In January President Trump had said he would “do a big number” on Dodd-Frank, which has long been identified as a administration target.

At the meeting of executives, Trump, making reference to Dimon and other financiers in the room, said: “We expect to be cutting a lot out of Dodd-Frank, because, frankly, I have so many people, friends of mine that have nice businesses that can’t borrow money, they just can’t get any money because the banks just won’t let them borrow because of the rules and regulations in Dodd-Frank.”

Interestingly, the name of the act doesn’t appear anywhere in the order.

Digging into the text

In one section the order directs the Treasury Secretary to consult with member agencies of the Financial Stability Oversight Council concerning the “extent to which existing laws, treaties, regulations, guidance, reporting and recordkeeping requirements, and other Government policies promote the Core Principles and what actions have been taken, and are currently being taken, to promote and support the Core Principles.”

The stability group’s ten voting members include the Treasury Secretary, chair of the council; heads of the traditional banking regulators and the National Credit Union Administration; the chairman of the Securities and Exchange Commission and the chair of the Commodity Futures Trading Commission; the director of the Federal Housing Finance Agency; and an appointed independent expert on insurance.

That’s nine. The tenth voting member is the director of the Consumer Financial Protection Bureau—ironical given that the future of CFPB and its current leadership remains unclear under the Trump administration.

While Trump typically goes for the colloquial in speeches— and tweets with the most seasoned social media users—the order reads as if framed by a professional policy wonk. The document sets out core principles for Dodd-Frank reform, verbatim below:

1. Empower Americans to make independent financial decisions and informed choices in the marketplace, save for retirement, and build individual wealth.

4. Enable American companies to be competitive with foreign firms in domestic and foreign markets.

The order follows on an Inauguration Day regulatory freeze and a Jan. 30 “one new reg in, two old regs out” executive order. Both are believed to not involve most financial regulators, though there are some questions on the status of CFPB following a 2016 court case.

As indicated earlier, some commentary on the new initiative was pushed out to the media in advance of the signing of the order.

“This Executive Order is likely to be step one in a longer process of making sensible regulatory relief a reality,” Thomas Vartanian, a Dechert LLP partner who leads the firm’s financial institutions practice, said in an advance statement. He added that it is “just sound public policy to evaluate seven years after inception the impacts of the Dodd-Frank Act, particularly since no cost benefit review was done before it was enacted, and none has been done since.”

Vartanian, a former regulator, added that “the rubber hits the road with the regulatory agencies; tell me who the regulators are going to be and I’ll tell you what the regulatory policy will look like.” [Read “D.C. veteran assesses chances for bank law reform”]

Other comments came out after the signing.

Among comments from banking trade associations:

ICBA was the only banking group to be represented at the Rose Garden signing of the Dodd-Frank Act.

“While banks have continued to meet the needs of their customers, clients, and communities to the best of their ability, they have faced tremendous headwinds that came with a sharp increase in highly prescriptive government regulation and the sheer weight of more than 24,000 pages of proposed and final Dodd-Frank rules…

The Consumer Federation of America stated:

“Less than a decade ago, Wall Street and our economy were in freefall. Toxic mortgages peddled illegally helped to cause the most severe financial crisis since the Great Depression. Today’s actions by the White House are an ominous sign that amnesia has set in. … Wall Street needs a watchdog, not a lapdog.” Read entire statement

The Center for Responsible Lending stated:

“If this Administration has not learned from the mistakes that caused the 2008 economic crisis, they are doomed to repeat them. Lest we forget, lax regulation allowed Wall Street to back extremely reckless loans whose failure snowballed into a financial crisis and Great Recession. Tens of thousands of Americans lost their homes, around eight million Americans lost their jobs, and U.S. households lost trillions of dollars. Recent comments from the Administration and this upcoming executive order are a warning sign of a return to those dark days.” Read entire statement