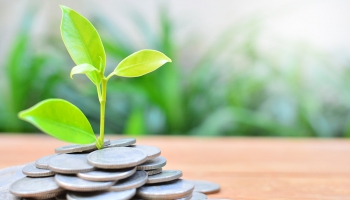 Companies and governments are expected to raise $500 billion through the issuance of green bonds in 2021, according to Nordic bank SEB.

In a new report published in December, SEB said that corporates and governments issued nearly $649 billion of sustainable debt – including green bonds and social bonds – in 2020 to the end of November.

“In a year of both stress and ongoing tests, one could easily imagine that finance would go to safe havens, but the world has gone sustainable,” said  Christopher Flensborg, head of climate and sustainable finance at SEB.

“The green bond market has just passed $1 trillion since inception and we expect next year’s issuance to be close to $500 billion in a single year. With added growth from new sustainable loan types, 2021 could see more than $1 trillion raised for sustainability-labelled financing.”

While green bonds – which raise money from investors for environmental projects and causes – still dominated the sustainable fixed income market, the report showed that bonds linked to broader sustainability issues have grown in popularity in recent years.

In particular, 2020 was a bumper year for social bonds, with more than $150 billion raised.

Thomas Thygesen, SEB’s head of research for climate and sustainable finance, said 2020 could be looked on as the year in which the “transition to a fossil-free production system took off”.

“The new technology paradigm is taking shape, and companies have started the race to become first-movers,” he added.

While Europe led in terms of highest volumes, with $236 billion worth of sustainable bonds and loans issued in 2020 to the end of November, SEB reported that North American issuance hit $94.9 billion in the same period. Within this, $17 billion was added in October and November alone.

The majority of the US market was focused on environmental issues, with $75.6 billion raised for green bonds and loans.

“From the regulatory side, there are clear indications of coordination across industry bodies and regulators – so we expect to see an increasing degree of harmonization of vocabulary and focus moving forward,” Flensborg said. “This should enable more systematic engagement.”