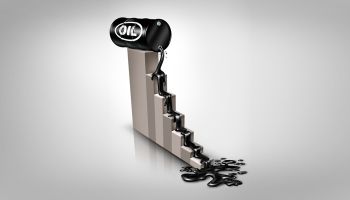 While falling oil prices have been on the Street's mind for the last few months, the rapid, recent decline has caused some panic in the investor community and could prompt some bankers to table strategic initiatives.

Impacts on stocks versus banks

Oil prices have dropped below $50, or more than 40% since OPEC announced in late November 2014 its plans to maintain production levels.

Banks in states where the energy boom has helped local economies, such as Louisiana, Oklahoma, and Texas, have watched their stocks take significant hits in the last few months. The sell-side community still believes that plunging oil prices are likely to lead to slower loan growth rather than significant credit losses for community and regional banks' given their minimal direct exposure to energy lending. But the continued erosion in oil prices is beginning to give bankers some pause.

Justin Long, partner at Bracewell & Giuliani, said that banks have become more cautious even in the last month. When oil prices fell from $100 to $70, he said that many bankers remained optimistic, but the continued decline in the last month has caused them to rethink some of their plans.

"I think that caution is leaking into transactions," Long told SNL. He added that the sharp decline in some bank stocks is causing institutions to rethink raising capital or going public.

"I think you're seeing the pricing concerns with those drops and people that are considering going public are walking the path, opposed to running it," Long said.

Brett Rabatin, an analyst at Sterne Agee & Leach, noted that the swift decline in some bank stock prices is stoking fears in the investment community.

In a Jan. 7 report Rabatin wrote:

"[T]he Texas banks will not catch a bid until oil finds a footing, and our concern is increasing that earnings season will involve some commentary from managements that earnings growth will prove more difficult near-term (from a mix of slower economic growth in Texas, potential provisioning, and some uncertainty). We nonetheless are speaking with more investors daily that are looking to catch some of the premium Texas franchises on pullbacks, and note that fear is reaching a fairly high point."

Past statements coming home to roost

Oil prices have now moved well below levels that some banks had said could pose a risk to their balance sheets and are significantly lower than banks' internal price decks—the price of oil used in underwriting assumptions.

Those price decks generally equate to 80% of current futures strip, according to research conducted by the Raymond James bank analyst team. The analysts noted in an early December 2014 report, citing Macquarie Tristone's quarterly energy lender price survey, that the average commercial bank price deck was "fairly meaningfully" above the current oil price strip. At the time, oil traded around $65, well above current levels.

Weeks earlier when oil prices were higher, some banks had cautioned on third-quarter earnings calls that credit problems could arise if oil prices fell to $60. John Killian, chief credit officer at Comerica Inc., for instance, said on the company's third-quarter earnings call in October 2014 that if oil prices fell into the $60 range, activity will "slow a lot" and "some credit issues" will begin to arise if prices hold at that level for two or three years.

Whether oil prices will hold at current levels is unclear, but banks have begun providing greater details on their energy lending exposure in light of the decline that has occurred.

Most banks have not announced plans to set aside specific reserves to account for the steep decline in oil prices. Zions Bancorp, however, disclosed in an investor presentation in early December 2014 that reserves in the fourth quarter "may reflect" declines and increased volatility in oil prices.

Sterne Agee's Rabatin believes there is a possibility that bank management teams will talk about higher loan loss provisioning in 2015 if oil prices continue to move lower or hold at current levels. The analyst and others believe that slower growth rather than potential credit losses, though, remains a greater threat for banks. Rabatin screened banks with energy portfolios and noted that even assuming severely adverse conditions, all the banks examined would remain profitable.

What producers are saying

For example, ConocoPhillips said in early December 2014 that its 2015 capital budget was approximately 20% below 2014 levels. Murphy Oil Corp. disclosed a few days later in an investor presentation that its capital expenditures in 2015 would be close to 20% lower than 2014. In mid-December 2014, Marathon Oil Corp. said it anticipated that its 2015 capital, investment and exploration budget would be about 20% lower than 2014 levels, excluding its recently disposed Norway business.

As oil prices fell into the new year, some spending plans came with even larger planned reductions. Concho Resources, for instance, said its 2015 capital program would be $2.0 billion, down approximately 33% from the $3.0 billion program the company outlined a few months earlier in November 2014, given the "sharp decline" in commodity prices.

The pullback on growth plans from E&P companies could threaten some smaller markets that had experienced "oil booms" in recent years.

Banks in those areas experienced a substantial increase in deposits stemming from the economic growth in their areas and a number of those institutions had considered raising capital because they saw opportunities to put those deposits to work in their loan portfolios, according to Joseph Ford, senior partner at Fenimore, Kay, Harrison & Ford LLP. He said those banks are now undergoing a "gut check" as those plans are now delayed. He believes that some of those institutions might even consider partnering with another bank that can support their future growth.

"They may be looking at selling more readily than they thought. They might have expected another run. It's one more ingredient," Ford told SNL.

Advisers reiterated that Texas is not as exposed to a decline in oil prices as it was in the late 1980s, when falling oil prices helped lead to a sharp recession. They noted that the economy is no longer a "one-trick pony" and is likely far more resilient now and will continue to attract banks looking to grow through acquisitions.

Still, Bracewell & Giuliani's Long said that volatility and the prospect of a prolonged downturn in oil prices just might make some buyers gun shy when it comes to acquisitions.

"I still think buyer beware if you have concerns that it's a prolonged downturn when you're coming in. Does an out of state buyer have the ability to analyze a loan portfolio that is exposed to the oil and gas industry?" Long said. "Does it have the ability to get comfortable particularly if we're this volatile? I think if things settled out pricing-wise on oil, I think you'd get clarity."

Read blogger Ed O’Leary’s “Talking Credit” series on oil lending, including an interview with Texas bank in the Permian Basin.