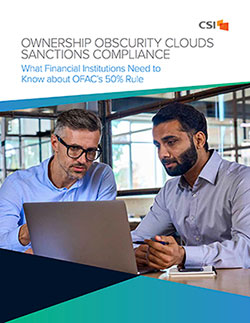 Understanding OFAC's 50% Rule
In 2008, OFAC first addressed its 50% Rule, before updating it in 2014 for further clarity. The revised guidance issued in 2014 states that, "any entity owned in the aggregate, directly or indirectly, 50 percent or more by one or more blocked persons is itself considered to be a blocked person."

Legal entities within the above definition are blocked from any kind of business transaction with U.S. persons. Furthermore:

This rule applies to all transactions, including when the legal entity is a direct vendor of the financial institution or supplying goods or services through another third-party vendor or intermediary.

This white paper is brought to you by CSI

More in this category: Payments in 2022: What You Need to Know »
back to top