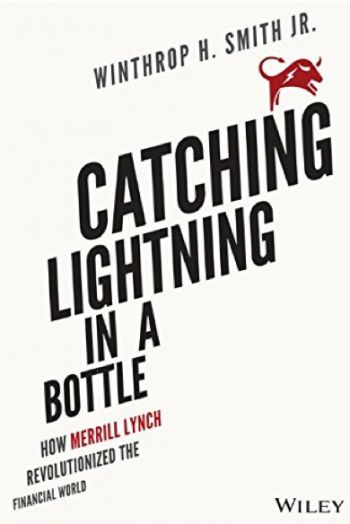 Today, Merrill Lynch is part of a banking company. But for many years it was “The Bull”—a fierce and inventive rival for traditional banks’ business. In 1979, then-head of Citicorp Walter Wriston gave a famous presentation about Merrill’s competitive threat that went down as his “if it quacks like a bank…” speech, making Merrill Lynch a case example for bankers of a favored rival.—Editor

Winthrop Smith, Jr., is the son of Winthrop “Win” Smith, one of the early partners at Merrill Lynch. Winthrop, a longtime insider himself, has written a very detailed historical account of the Merrill Lynch firm from the very beginning up until the last stockholder meeting before it was sold to Bank of America in December 2008.

Smith worked at Merrill Lynch for nearly 28 years. His father died years before the son started at the firm, but Smith felt strongly that he had the memory and reputation of his father to live up to. Smith worked his way up to Merrill’s executive committee, but ...

“In October 2001, the culture of Merrill Lynch was about to change as a result of a new management team with different ideas about how to maximize profits. I knew that I couldn’t work within this new environment, so I decided to retire. And I resolved to write the story of Merrill Lynch.”

Actually, Smith didn’t pick up his pen until after the financial crisis hit and, in his words, his “former firm became a victim of greed and the lack of proper oversight by its board of directors.”

Since the book was written with the intent of being a detailed historical record of Merrill Lynch, it has many dates and names that were difficult for me as a novice reader to absorb. However, this in no way takes away from the narrative of the many innovations the Merrill Lynch firm brought to the world of investing, from its fresh perspective on the individual investor to a retail financial services approach that ushered in practices taken for granted in finance today.

Most of the innovations were designed to help and educate the individual investor about the opportunities available to them in the stock market. To ensure ethical behavior among its brokers and to make sure all employees knew the company values, Merrill Lynch came up with five principles for its staff to adhere to at all times.

These became know as the principles of “Mother Merrill” and are as follows:

1. Client Focus—Our clients come first. They are the driving force behind everything we do.

2. Respect for the Individual—We believe in treating everyone with dignity, whether an employee, shareholder, client, or member of the general public.

3. Teamwork—We strive for seamless integrations of services because in our clients’ eyes there is only one Merrill Lynch.

4. Responsible Citizenship—We seek to improve the quality of life in the communities where we live and work.

5. Integrity—No one’s personal bottom line is more important than the reputation of our company.

Smith believes that E. Stanley O’Neal, the last CEO of the independent Merrill, did not understand the importance of the principles to the culture of Merrill Lynch. He believes this was the greatest reason for the ultimate downfall of Merrill Lynch under O’Neal’s leadership. That led to the sale of the firm to Bank of America.

To me, it reflects the tremendous importance of hiring the right CEO in any organization.

Beginnings of the Bull

Charles Edward Merrill was the son of a doctor who also owned a pharmacy. Merrill worked in the pharmacy with his dad and learned the retail business. He went to college at Amherst, but only completed two years. He also attended one year of law school. Merrill became engaged to Marie Sjostrom whose father was treasurer of a textile company. Robert Sjostrom taught Merrill all of the inner workings of a business and helped him get his first job on Wall Street.

At 28, Merrill opened his own firm. His only employee was Lilian Burton, his lifelong secretary.

Edmund Calvert Lynch was working as a bond salesman on Wall Street. He had met Merrill at the YMCA, where both men enjoyed swimming. Merrill asked Lynch if he would like to join the firm and he agreed, thus founding Merrill Lynch in 1915.

The two were total opposites—Merrill was the optimistic salesman, Lynch the conservative and skeptic. Lynch died in his early 50s, but Merrill continued with his name as an honor to his partner—although through much of their partnership the relationship was strained.

In 1916, Win Smith, the author’s father, joined the firm as soon as he graduated from Amherst. Merrill and Smith’s talents complimented one another. Their work together and their friendship and shared vision formed the original foundation for the firm to grow upon in the future.

Clearing a path in the jungle

In the early 1900s, most individuals didn’t have access to investments in equities and bonds. The few brokers available to consumers at the time were called “bucket brokers.” They were notorious for placing an opposite trade to the one they were placing for their client, thus insuring a profit for themselves.

If the customer was extremely lucky they might make a profit too.

It was Charlie Merrill’s vision to bring integrity to the world of investing for the individual. Much of Merrill Lynch’s early success as a firm was in the underwriting of retail discount chain stores. Merrill’s first big success was underwriting the McCrory Stores (later the more familiar McCrory’s).

One of the first Merrill Lynch innovation: Taking stock in the company they were underwriting as opposed to taking fees for the underwriting.

This strategy succeeded two ways. First, it gave investors confidence in the stock issue, because the firm that was underwriting the stock was also a shareholder. Second, this philosophy worked to make the partners of the firm wealthy, in the wake of the success of the companies they were underwriting.

Charlie Merrill predicted the severe downturn in the stock market before it occurred in 1929. He told his brokers to make sure all of their customers were given the advice to liquidate their stock holdings. Due to the fact both Merrill and Lynch had liquidated many of their personal stocks, they both had the cash reserves required to support the firm during the crash of 1929 and the Great Depression.

Due to the Crash, Merrill Lynch decided to sell its brokerage side of the business to E.A. Pierce the next year. Win Smith went with that firm to help manage its Boston office. Once the brokerage business was sold, Merrill gained time to focus on one of the firm’s largest investments, the Safeway Grocery Stores.

Merrill was able to advise Safeway on cost-cutting measures and the company did well. People still had to eat, so the Safeway chain thrived during the Depression.

One of Merrill’s many great ideas was to give away magazines at the checkout counter of the Safeway Stores to advertise the company’s brand products. Due to lack of support from his business associates, Merrill himself launched a weekly magazine called Family Circle in 1932. He personally lost $700,000 before the magazine became profitable. He sold it in 1954 for an undisclosed amount—by which point the magazine’s circulation base had reached 4 million.

In 1940, Merrill Lynch decided it was time to get back into the brokerage business and forged a deal to merge with E.A. Pierce, the company that had bought the original brokerage operation. The merger brought Win Smith, Sr., back into the Merrill Lynch fold. Smith’s greatest strengths were his calm demeanor and ability to organize. Together, Merrill and Smith would revolutionize the brokerage business with a series of innovations. Let’s look at some of them.

Changing the times and changing with the times

With stock ownership so prevalent today, it is difficult for us to believe that in the 1940s the average American didn’t own stock.

Merrill Lynch wanted to change that. Wall Street still had a terrible reputation after the stock market crash of 1929 and young people wanted to be anything but a stock broker.

Lou Engel, Merrill’s marketing director, wrote a book called How To Buy Stocks: A Guide To Successful Investing. Merrill Lynch worked to teach women how to invest in stocks and had programs designed for women.

The firm also participated in a program of the NYSE in the mid-50’s which encouraged working Americans to invest small amounts each payday in their brokerage account. Even though most of the accounts were losing money for Merrill, the firm believed that eventually these customers would grow to be profitable. Not only did they become so, they also proved to be very loyal customers.

Every Merrill Lynch broker had access to the firm’s research department. This operation worked independently of the sales side of the business and produced factual opinions regarding the quality of stocks—even if they wrote negative comments on some of the stocks Merrill Lynch itself had underwritten.

Merrill Lynch was also very aggressive in implementing computers. Leaders understood that computers could be used to help manage some of the repetitive back office work being done manually for the customers.

Merrill’s defense to Glass-Steagall was the fact they weren’t taking deposits like a bank. After a lengthy court battle, Merrill Lynch was successful in defending the CMA account.

Beyond all of these domestic innovations, Merrill Lynch saw success beyond the U.S. It became one of the top leaders in international investment banking around the world.

I recently had the privilege of visiting with a Merrill Lynch broker who had been with the company for almost 50 years. He was one of the “best and the brightest” selected to attend the training school way back when. (He didn’t describe himself this way, but I knew this to be true after reading the book.)

It’s sad a company once so strong fell so far.

In his prologue, Win Smith, Jr., recalls his last days at work, when a heated meeting with the new head, Stan O’Neal, convinced him he had to leave. Afterward, he reflected on the matryoshka—Russian nesting dolls—that had been presented to Dave Komansky, the chairman and CEO, who O’Neal had made clear was a target.

Each doll had the face of a Merrill Lynch leader, beginning with Merrill and ending with Komansky.

“The doll got progressively larger from Merrill up,” Smith writes. “The symbolism of the dolls was that each era of Merrill Lynch grew from what was inherited from the prior one and that each new leader built on the success of his predecessor rather than relied on what he could achieve alone. Each of us stood on the shoulders of those who came before us, those who built our successful firm and created a powerful and enduring culture. … O’Neal had no interest in continuing the culture that had allowed our firm to prosper. … [The board] allowed a small group of greedy individuals to destroy an icon.”

More in this category: « What you didn’t know about networking 24 hours—that’s all, folks »
back to top