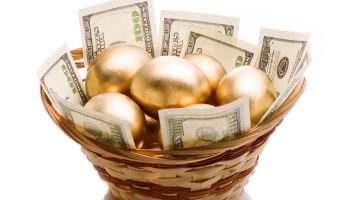 Banks continued to build their held-to-maturity portfolios as they prepare for changes in the interest rate cycle.

As banks wait for interest rates to rise from historically low levels and work to comply with new capital and liquidity standards, they placed large amounts of securities in held-to-maturity (HTM) portfolios. Unlike available-for-sale (AFS) portfolios, banks are not required to make mark-to-market adjustments to their HTM buckets on a quarterly basis. However, banks sacrifice liquidity when they place securities in their HTM portfolios as they are committing to holding the assets until they mature, even if they will carry lower, relative yields when interest rates rise. 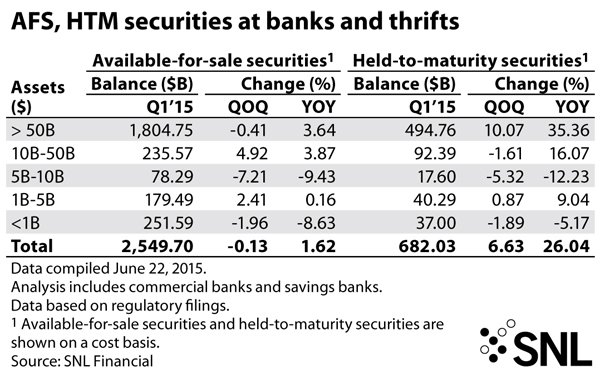 Those mark-to-market adjustments in AFS portfolios flow through accumulated other comprehensive income (AOCI) and impact tangible common equity. Banks have sought to mitigate the impact of changes in market valuations on their book values by relying on their HTM portfolios more and more. Banks increased their HTM portfolios to 21.10% of all securities at the end of the first quarter from 20.03% in the linked quarter and 17.74% a year earlier, according to SNL data.

The originally proposed Basel III rules required AOCI to flow through regulatory capital at all banks. Institutions have ramped up transfers of securities to HTM portfolios significantly since the provision was first proposed in the summer of 2012. Since the second quarter of 2012, HTM portfolios have risen by $407.15 billion, or 148.2%, according to SNL data. AFS portfolios, meanwhile, have actually declined by $57.64 billion, or 2.21%, during the same period.

The final Basel III rules, however, allowed non-advanced approach institutions, generally those with less than $250 billion in assets, to opt out of the rule that causes AOCI to flow through regulatory capital. Since many of the nation's largest banks were required to opt in to the AOCI rule, they have led the way in building in their HTM portfolios.

While falling long-term rates in recent years would have inflated regulatory capital ratios since unrealized gains have built over time, the opposite likely would occur when interest rates eventually rise. A number of market watchers expect that to occur in the not-too-distant future, with many predicting that the Federal Reserve could raise short-term interest rates later this year.

This has become even more important in a post-liquidity-coverage-ratio world. The liquidity coverage ratio (LCR) applies to banks above $50 billion in assets and requires covered institutions to hold "high quality liquid assets" greater than, or equal to, their projected cash outflows minus their inflows during a 30-calendar-day stressed scenario. Many HQLAs are rate-sensitive assets such as U.S. Treasurys and likely would come under pressure when interest rates rise. 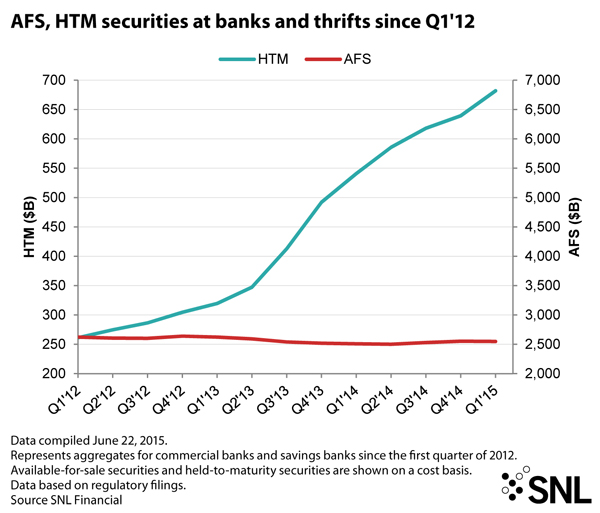 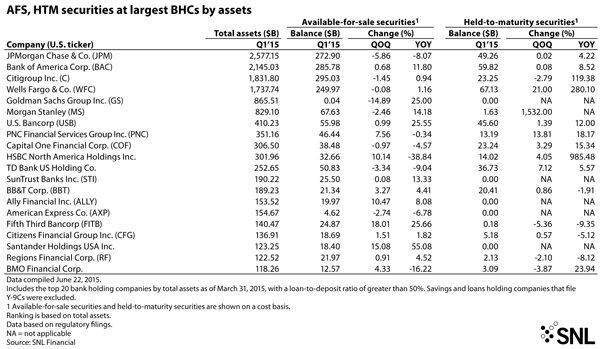 Banks with more than $250 billion in assets—JPMorgan Chase & Co., Bank of America Corp., Citigroup Inc., Wells Fargo & Co., Goldman Sachs Group Inc., Morgan Stanley, U.S. Bancorp, PNC Financial Services Group Inc., Capital One Financial Corp., HSBC North America Holdings Inc. and TD Bank US Holding Co.—increased their HTM portfolios in the first quarter by a median of 3.67% from the prior quarter and grew those portfolios by more than 15% from a year earlier, according to SNL data.

Banks with more than $50 billion in assets—which are subject to the LCR—have built their HTM portfolios considerably as well. Banks in that group increased their HTM portfolios at the end of the first quarter by 10.07% from the linked quarter and 35.36% from year-ago levels.

Most of the banking industry's securities remain in the bucket that is subject to changes in market values. Banks show those changes in values, and whether they have recognized gains or losses, by disclosing the level of unrealized gains and losses in their AFS portfolios every quarter. When long-term rates rose in 2013, the level of unrealized gains in bank portfolios was nearly erased.

Long-term rates remain low, but the yield on the 10-year Treasury has risen 39 basis points since the end of the first quarter. Federal Reserve data shows that the level of unrealized gains at U.S. commercial banks has declined by roughly 45% since the end of the quarter.