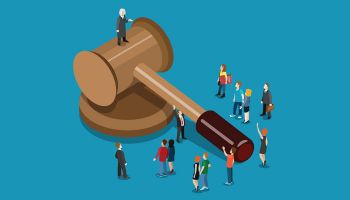 Compliance is kind of like a library that never holds a used-book sale. They hardly ever get rid of everything, so the shelves just grow more crowded and there are more bookcases than ever. And it costs more to run the library.

Of course, banks aren’t libraries. They are supposed to be profit-making businesses, lending money, and not books, which makes their regulatory challenges doubly hard.

Even as new rules from the Consumer Financial Protection Bureau and other sources have been added to community financial institutions’ regulatory burden, “regulators are still enforcing the old stuff too,” notes Pam Perdue of Continuity, a compliance automation firm. “The old rules don’t just disappear.”

The BCI is a tracking tool calculated quarterly to measure the regulatory impact on community financial institutions, including both community banks and credit unions. The index is computed based on an average size institution of $350 million. Among the ingredients: number of regulatory changes in a quarter; the volume of pages necessary to communicate those changes, as a proxy for the amount of work involved; and enforcement actions issued during a quarter by financial regulators. (You can see the full BCI chart at the end of this article.)

Among the numbers tracked, as part of the research, are costs and staff loads. Continuity’s Regulatory Operations Center examines rules to determine how many hours will go into analyzing their meanings and addressing their requirements.

The company computes that on average community banking institutions needed to spend an additional $29,145 and 384 hours to manage regulatory changes in the third quarter. This is calculated to be the equivalent of hiring 1.23 additional full-time employees.

The BCI takes a broad view of the staff functions affected by a regulatory changes, looking beyond Compliance proper to legal, policy writing, and other inward-facing functions, as well as the work of dealing with outside vendors on necessary changes.

“There’s usually a ripple throughout the organization,” says Perdue. “It doesn’t just register solely in the unit called Compliance.”

High as the quarterly cost number is, it is down somewhat from the second quarter. Continuity says the average institution has had to spend $100,000 over 2014 levels to keep up, in the first three quarters of 2015.

A long stream of new regulation remains in the pipeline, so there is no major, ongoing relief in sight for community banks.

“Anybody who thinks we’ll go back to pre-2000 or even pre-2008 enforcement levels is kidding themselves,” says Perdue. She says the industry is in a new compliance normal. (A number of the tools and services Continuity provides are designed to address costs of keeping up with regulation.)

Perdue is a former senior examiner for the Federal Reserve. She says one philosophical shift that some banks could make that would help in coping with regulatory is not viewing everything as a new development.

Click the image for larger version of chart in separate window. 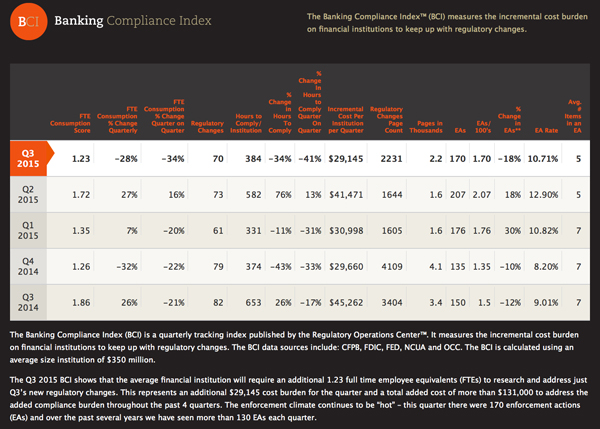