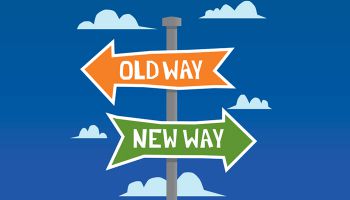 “Kodak was thinking in linear time. Apple was thinking in exponential time,” according to John Sculley, former CEO of Apple. Is your bank going to be an Apple or a Kodak?

Banks are eagerly anticipating rollbacks of some of the most onerous provisions of the 2010 Dodd-Frank Act following Donald Trump’s election victory.

In a preelection appearance at this fall’s Money20/20 conference, Sculley noted that financial services has put up some striking recent numbers: It accounts for 7% of U.S. gross domestic product and 30% of U.S. corporate profits.

The second figure, Sculley said, is three times larger than 30 years ago. So despite all the costs and restrictions of Dodd-Frank, the industry overall has thrived. It also has thrived amid the fintech revolution, in which technology-driven companies have made inroads into niche markets—traditionally the territory of banks. The question is whether or not banks’ success will continue.

Sculley—who is on the board of Lantern Credit, which is using artificial intelligence (AI) and machine learning to create an “intelligent credit score”—said he sees a convergence of financial services and digital technology, in which banks increasingly will embrace adaptations of technologies used by Google, Apple, and Facebook.

He said new companies intended to be bank alternatives will continue to form, but many banks will pivot from their strengths and adapt new technologies in ways that will both change their businesses and leverage them.

One of the things Sculley said he learned from Steve Jobs at Apple was to “zoom out”—look beyond your industry. Banks, he said, need to do the same with digital technologies, which are growing at an exponential rate. These include cloud computing, mobility, structured data analytics, and the internet of things.

Banks have great domain expertise, pointed out Sculley, including how to operate in a complex, highly regulated marketplace. This gives them an advantage if they combine their expertise with the latest technology, because, as he explained, “Technology advantages alone are not enough to secure sustainability in most industries.”

This won’t be simple, however, and Sculley predicted there will be casualties.

“The tricky thing about the financial services world,” he told conference attendees, “is that it’s so profitable. The real question is: ‘Does the banking industry have the incentives to be able to pivot towards some of the things that are working in other industries, but adapt them to the uniqueness of its domain?’”

Perils of being “linear”

Computer scientist and futurist Ray Kurzweil, according to Sculley, describes the rate of technology change that we’re seeing now as the “law of accelerating returns.”

Problem is, “We’re all intuitively conditioned to think in linear terms,” said Sculley. He cited Kodak as an example.

“Kodak was a smart company with bright engineers,” Sculley said. “They invented the digital camera.”

Kodak also had one of the largest photo printing businesses in the world. Because the company was losing market share in the printing business to Walmart, he said, it “doubled down” on film at exactly the time that Steve Jobs was introducing the iPhone with its built-in camera.

“With this ‘blue ocean’ around us of entirely new ways to think about financial services,” said Sculley, “if you sit back and wait in linear time for these things to roll out because you’re used to working that way,” it won’t turn out well.

He predicted there will be “Kodaks” in financial services—leading banks that miss the pivot to a marketplace in which customers pay more attention to the opinions of other customers than to the reputations of the incumbents.

“We are at the moment when this is no longer science fiction,” he said. “It is real.”