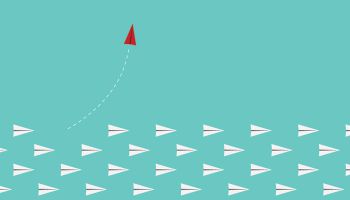 Flying away from the flock first may be disruptive, but it may also be the best strategy play.

Many banks see disruption as an external force, something that the market imposes on a company that must be reacted to. Walt Bettinger believes self-disruption makes for a far-better strategy.

Bettinger, president and CEO of Charles Schwab Corp., told an audience at the “Finance Disrupted” conference sponsored by The Economist in late September that his company, which started as a disruptor of the brokerage business, has made self-disruption a habit.

“What’s a bit unique about the firm is that generally we’ve done it to ourselves,” said Bettinger. “Successful firms will disrupt themselves, having the courage to do so, before someone else does it to you.”

Schwab began as a discount securities broker in the early 1970s, offering trades at $70 to $80 apiece, when the industry norm was around $250. Today, that level has fallen to $5 or even less, Bettinger said. In the firm’s early days commission income from those trades accounted for 90% of the firm’s revenue. Now commissions represent a small portion of that flow.

The firm has had its own history with the banking industry. In the early 1980s, it sold to Bank of America, but later Charles Schwab, the founder, and others bought the company out from under the BofA umbrella. In time, it bought U.S. Trust and today has its own banking operation under its own roof.

There are banks that have reinvented themselves over the years, and sometimes the change is wrenching. But Bettinger described his firm’s history as constantly shaking up its mix and strategies. The firm’s profit focus has shifted over the years. At one point mutual funds accounted for a large portion of its business, but now they represent a much smaller share.

“Now we’re a firm more based on advice and low-cost ETF indexing,” said Bettinger. “That’s the core of the disruption concept. It’s never stopped, it’s never going to stop. It’s intensifying in it pace right now.” (ETF stands for exchange-trade funds, which hew as closely as possible to a benchmark index.)

Of consumers and shareholders

Disruption, as portrayed by Bettinger, is not a one-front battle. Besides the competitive aspects, there are consumer aspects today.

“They are craving the experience they are having on Amazon” in all areas, said Bettinger. “So it’s an enterprise bar, not a financial services bar.”

Schwab is a public company itself, and Bettinger acknowledged that self-disruption means being able to face some down quarters while an old focus unwinds and new one gets traction. He said it was necessary to face the fact that, “we are going to go backward for a while, but that eventually we are going to go forward further than ever before.”

Matthew Bishop, senior editor, The Economist Group, joked that Schwab brokers must be too busy in this atmosphere to play golf.

Bettinger had his own riposte.

“We don’t pay our brokers enough to be on the golf course.”

He said the firm’s steady—and continuing—efforts to bring down the cost and price of trades is founded on an interesting contrast over the traditional brokerage firm.

“The person in that corner office doesn’t have any special insight on what’s going to hit the market,” he said, implying, so why would you try to charge for that?

A key factor in today’s market is the advent of roboadvisors, programs driven by artificial intelligence. While they are new technologically speaking, and quite popular, especially among younger investors, Bettinger suggested that at their core they aren’t new.

Bettinger said roboadvisors are based on a customer risk profile; asset-allocation; low-cost investments; periodic rebalancing of the portfolio; and some tax-loss harvesting.

“It’s nothing new” in concept, said Bettinger. “What’s new is the technology, by which we drive the price point down.”

“It’s another stop along the journey,” Bettinger added. Ultimately, he said, a key fundamental hasn’t changed, whether the hub of a financial service is human or silicon.

“Our business,” said Bettinger, “is all about trust.”

Bettinger also recommended that observers maintain some perspective. His company brought in $18 billion in new assets in August, which is a slow month for the industry. Even so, that total, he said, was higher than the total of the two largest robo firms’ assets under management.