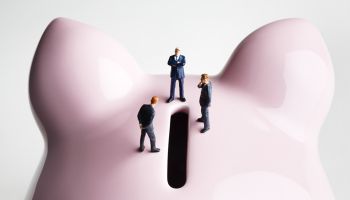 Nancy Bush is a veteran bank analyst. The following does not constitute investment advice, and the views and opinions expressed in this piece are those of the author and do not necessarily represent the views of S&P Global Market Intelligence nor Banking Exchange.

What is it that bank investors want, exactly?

When I first came to Wall Street in 1982—well, into the investing business, anyway—I started to become familiar with some of the aphorisms that have long passed for wisdom on the Street.

Perhaps the oldest—and in my view, still the truest—is that "Wall Street is a small street," meaning that on Wall Street, everyone knows your business, and that they know it usually within a short span of time. (Just try getting fired to test that one.)

The second—also mostly true—is "don't fight the Fed," and that pithy saying is being again validated even as I write this and markets gyrate to every pronouncement from new Fed Chairman Jerome "Jay" Powell.

And third is that old saw "the trend is your friend." As any investor in the FANG stocks can now tell you, that one works until it suddenly doesn't. Facebook, Apple, Netflix, Google and the rest of the motley momentum crew have come to disappoint those investors who thought that they could only go up.

And then there is one old and supposedly sage saying that has come to be more of a contradiction in terms, and that would be the "wisdom of the markets."

That ancient adage is really an oxymoron—if markets are driven by fear and greed, where is the wisdom?

There are undoubtedly wise investors who thrive in markets both chaotic and calm, and those gurus become legendary—Morgan, Graham, Keynes, Druckenmiller, Buffett, and on and on.

But for most of us ordinary schlubs, in the markets since the Financial Crisis, it has been less about wisdom and more about dodging the latest bullet.

And the bullets are flying fast and furious right now, thanks both to the hyperactive thumbs of the present occupant of 1600 Pennsylvania Avenue and to the ascent of a new and somewhat sphinx-like Chairman of the Federal Reserve.

While Powell (or J-Pow, as he is coming to be known in the media) is mincing few words in transmitting his view that rates must continue to rise and the equity markets be damned, there is no such clarity emanating from the White House.

The policy on Syria? Subject to daily revision. Tariffs on China? Maybe big ... or maybe not. More sanctions on Russia? Almost certainly ... but we'd also like a better relationship with the Kremlin.

Pick a day, any day, and American "policies" could have shifted from the day (or the hour) before. (Just ask Ambassador Nikki Haley.)

It's no wonder (to me, anyway) that we are not seeing loan growth at the banks galloping away, tax cuts notwithstanding. What business owner wants to invest in the middle of this circus?

For one thing, few entrepreneurs in America are dumb enough to not realize that trillion-dollar annual deficits in a few years will be a bad thing and will have to be paid for some way—first by higher interest rates on government debt and then eventually by a tax increase that reverses it all. (And oh, yes—there might be a recession thrown in there somewhere.)

There is no free lunch, and our leaders (and I use that term loosely) in Washington do not seem to realize that bankruptcy is not an option. (Perhaps because our President seems to regard it as simply the cost of doing business.)

Looking at the right numbers

Bank earnings have come in quite respectably and yes, they have gotten juiced by big drops in the effective tax rate. But that is not the story.

Even Wells Fargo & Co.—where the earnings announcement was prefaced with a warning that results were preliminary due to a pending $1 billion agreement with regulators—showed flat loans when compared with the prior quarter, in spite of mandated regulatory limits on balance sheet growth.

This bedeviled bank was even able to show growth in the all-important consumer and small business deposit categories, where logic would dictate that customers should be running for the hills. Not so—apparently branches and brand do count for something.

I had to shake my head at some of the questions coming from the bank analyst community on this latest round of conference calls, especially at some that were directed at Bank of America CEO Brian Moynihan.

One analyst bemoaned the lack of any "dessert" in the earnings, by which he seemed to mean loan growth in excess of the company's 5% reported core growth rate. (As I listened to this ridiculousness, I had to resist the urge to do my best imitation of little Judy Miller—the Saturday Night Live character developed by the incomparable Gilda Radner, who repeatedly threw herself against the wall while doing a pretend TV show in her room.)

Here is a company that has taken a solid decade to completely restructure itself from the inside out, massively lessening credit risk, cutting huge numbers of people and relentlessly reducing other expenses, doing a complete reversal on a big bet in the mortgage business, refining its branch footprint while pioneering mobile and digital product delivery, buttressing capital, and just generally making itself a bank better able to deliver a more predictable and consistent stream of earnings and return large amounts of capital to shareholders.

And yet, the Street—at least as exemplified by this questioner, who is ubiquitous—seems to want to see this bank deliver loan growth that would be well in excess of something that growth in the economy would support.

Have we learned nothing in the past 10 years about the perils of outsized loan growth—and how it is eventually given back?

Yet another questioner—one who is an even bigger dinosaur than I am—asked why Bank of America has not increased its capital levels over the last several years, and how they were ever going to be able to grow their balance sheet unless they increased their common equity.

First off, we all will have to get used to the reality of hits to accumulated other comprehensive income as rates rise—after having years of massive gains in bond portfolios—and those will impact GAAP capital, but not regulatory capital.

Secondly, Bank of America has been involved in share buybacks over the last few years, and has finally been able to resume paying something that resembles a normal dividend, and both of those capital return activities have kept BofA's capital at manageable levels.

And a news flash for those who have not been listening—banks presently have ample capital to grow their loan books and more capital will not equate to stronger growth, just to worse returns.

Going back to yesterday’s favorite prediction

There was a great brouhaha a few years ago about whether bank stocks would become the new utility stocks. I'd like to say a few things about that.

First, when I go to turn on the lights or the water I'm always happy for the soundness and predictability of my local utility companies, and it would be nice to know that my bank will always be in similarly good shape.

Secondly, my local electric utility (Southern Company) is presently selling at a 16X forward PE, and no large bank that I know of (and only a few smaller ones) sells at such a lofty valuation.

So, yes—banks that are utilities of a sort would be good, only I'd say that I want them to be "utilities with benefits," with the benefits being the ability to innovate the products to which I have access, deliver service on an individualized basis, and just keep cranking out the dividend growth with fewer constraints than they have had in the past few years.

As for the quality of bank stock analysis on Wall Street and the unrealistic expectations that it may engender—well, I just don't know what to tell you.

This article originally appeared on S&P Global Market Intelligence’s website on April 23, 2018, under the title, "What is it that bank investors want, exactly?"