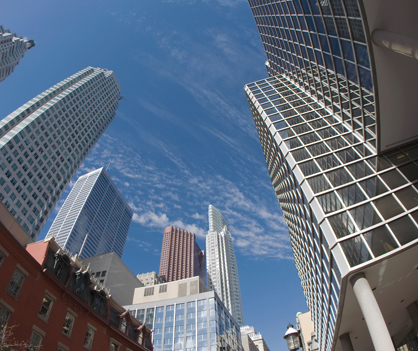 Commercial real estate delinquencies at U.S. commercial banks continued to decline in the first quarter of 2013, while loan growth in the category may be staging a comeback.

Aggregate CRE loans were $973.21 billion as of March 31, compared to $1.133 trillion three years ago. However, the current level is the highest in the last seven quarters. And three of the last five quarters have shown incremental growth. 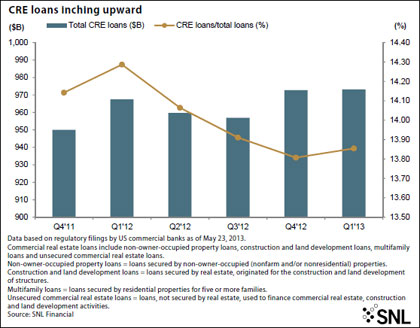 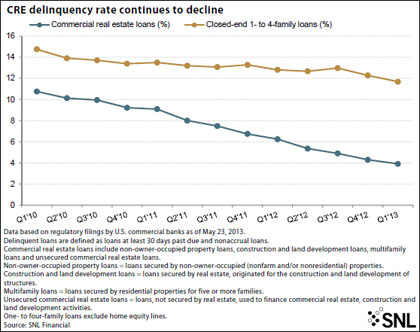 SNL analyzed the CRE portfolios of U.S. banks of varying size and found that companies with total assets between $1 billion to $10 billion and those between the $10 billion to $50 billion category had the highest median year-over-year CRE loan growth of 4.73%.

Growth was the lowest at 1.97% for banks with less than $1 billion in assets, though they had the lowest median delinquency rate of 2.24% at March 31. 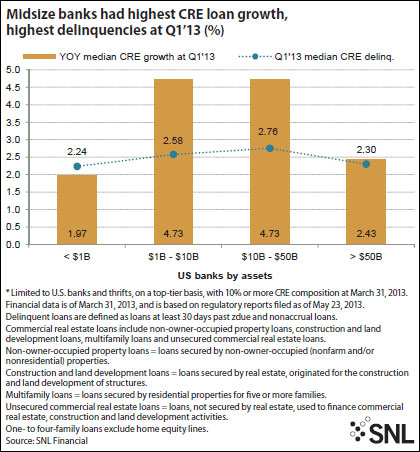 SNL also unearthed the top 20 banks and thrifts with the highest CRE growth during the first three months of 2013. The list is topped by Glenview, Ill.-based Cummins-American Corp. During the quarter, the company more than doubled its CRE loans to $66.0 million. Most of that increase came from loans secured by non-owner-occupied properties, which almost tripled to $52.6 million.

Cummins-American Corp. is followed by Mount Olive, N.C.-based Southern BancShares (N.C.) Inc., with quarter-over-quarter CRE loan growth of 38.07%. Of the 20 companies on the list, Southern Bancshares had the highest delinquency rate at March 31 of 23.91%. Many of the delinquencies came from the September 2011 failed-bank acquisition of Norfolk, Va.-based Bank of the Commonwealth. In February, the bank announced a live bank transaction, expanding its branch network in North Carolina.

Atlanta-based CertusHoldings Inc.'s CRE delinquency rate of 23.71% was also heavily impacted by FDIC-assisted transactions. It has completed five failed-bank deals. The most recent deal was for Lenoir, N.C.-based Parkway Bank in April. 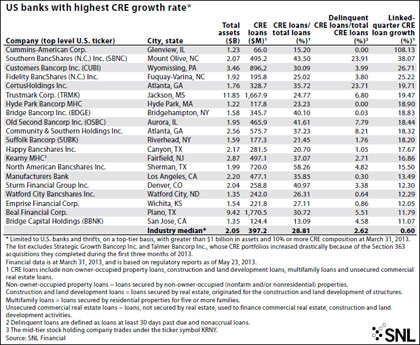 Jackson, Miss.-based Trustmark Corp. is the largest company on the list with total assets of $11.85 billion and CRE portfolio of $1.67 billion at March 31.  The bank completed its acquisition of Mobile, Ala.-based BancTrust Financial Group Inc. in February, adding around $2 billion in assets to the franchise.

It should be noted that the list excludes El Paso, Texas-based Strategic Growth Bancorp Inc. and Troy, Mich.-based Talmer Bancorp Inc. Those CRE portfolios increased drastically because of the Section 363 acquisitions they completed during the first three months of 2013.

SNL studied the trends at the 20 biggest CRE lenders in the country by dollar amount and found that only seven of them saw an increase in CRE loans in the first quarter of 2013. The median CRE delinquency rate and loan composition of the group were 2.92% and 14.14%, respectively. Wells Fargo & Co. had the largest CRE portfolio of $101.40 billion whereas Westbury, N.Y.-based New York Community Bancorp Inc. had the highest percentage of CRE loans to total loans of 84.20% at March 31. 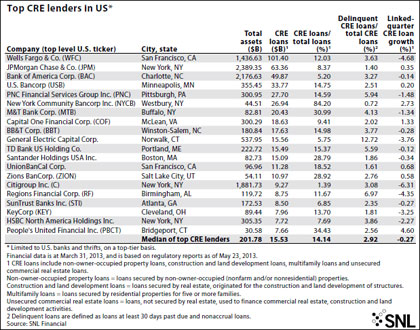 Patterns at the state level

In addition, SNL analyzed the median year-over-year CRE growth rate for U.S. states based on all commercial banks with a CRE composition greater than 10% that were based in each state. More than two-thirds of the 50 states saw an increase in CRE loans during the 12 months ended March 31.

In fact, there were eight states with a double-digit growth rate.

Rhode Island recorded the most growth, with a rate of 17.55%, followed by Massachusetts and Alaska at 15.60% and 13.78%, respectively. The Dakotas, Nebraska, Connecticut, and New York were the other five states with growth in excess of 10%.

Fourteen states saw a decline in their CRE portfolio during the year ended March 31. North Carolina and Idaho witnessed the most attrition, with respective median declines of 6.85% and 5.39% in their CRE lending during that period. 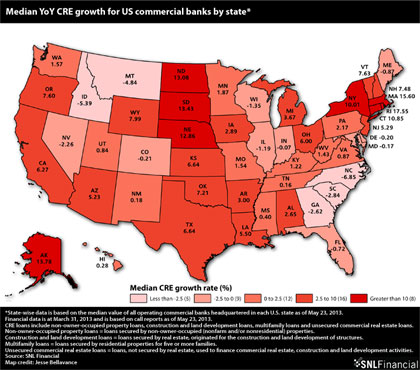