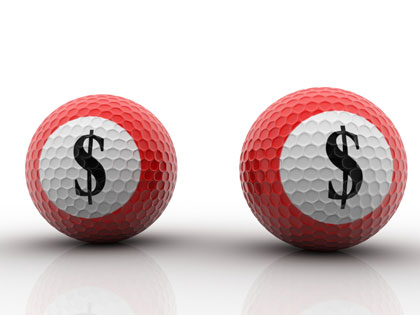 During ABA's National Conference for Community Banking Chief Economist Jim Chessen drew on golf to make his observations just a bit more bearable. He brought bankers some good news, but there's a hard course ahead.

Chessen said he and his team, honoring the longstanding economic sideline of seeking parallels in unusual indicators such as women's hemlines, attempted to correlate Tiger Woods' wins with patterns in the nation's Gross Domestic Product.

"Sadly, we were disappointed,"  said veteran economist Chessen, "because his recovery is actually running more slowly than the economy's."

This wasn't the only golf analogy that Chessen tapped during his outlook presentation before the bankers. Later, he flashed a PowerPoint slide of the instruction manual parody How To Line Up Your Fourth Putt, by Bobby Rusher, and compared the golfing "style" advised in it to that of Congress, each time that body attempts to solve the nation's economic difficulties.

"Congress is like the sort of golfer who hits a ball within five feet of the cup and then they pick it up and say, ‘That's good'," said Chessen. "Then they write down a 5 on their scorecard instead of an 8. And at the end of their round they really think they shot that 88. They're probably proud of themselves. It's in their campaign literature, right? That's our Congress."

Teeing off with Chessen

Chessen began by putting his analysis into a summary:

"In spite of a really lousy fourth quarter and a really slow first quarter, GDP is going to accelerate this year, and that's a good thing. The job market is improving. Housing is recovering.  Europe is getting better, although that's a risk. There are other good things happening in the U.S, particularly the shale oil boom."

Chessen noted that the ABA's Economic Advisory Committee had issued its semi-annual forecast in January. The group, consisting of 13 top economists from large banks, sees GDP improving over the year, though not to stellar levels yet. Consumer price growth will be "reasonable." Housing prices will continue to improve--a source of some strength. Job growth will be steady, the economists predict, compared to 2012, "with the unemployment rate coming down ever so slowly." 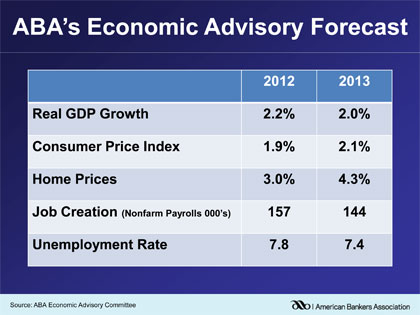 Chessen presented a summary of the ABA Economic Advisory Committee's projections. The economists tempered their somewhat upbeat expectations with worries about a slip into recession should federal austerity kick in and pull the economy down. You can read more about the committee's view here, and watch a short video about it here. Click on the image for a larger version or click here.

"There's a lot of variability here in what the economists were thinking," cautioned Chessen, "because they don't really know what's happening with the fiscal cliff that's been and the implication of the sequester." (The "sequester" is the $85 billion across-the-board federal spending cutback that will be activated March 1 in the absence of agreement on other measures between Congress and the White House.)

Bottom line, Chessen said, "we're going to be in a slow-growth period."

A major cause of the slowness will be the drag of federal debt. Chessen pointed out that in the fourth quarter of 2012 both fixed investments (yellow bars in the chart below) and personal consumption spending (green bars) came in strong-signs of "an economy stronger than what you've seen before," said Chessen.

Chessen pointed to these factors as evidence of the strength underlying the economy.

However, fluctuations in inventories (pink bars), a fall in net exports (orange bars), and the drag of government policies (light blue bars) combined in the fourth quarter to pull down GDP.

"Where's the weakness coming from?  It's coming from the government," said Chessen. This, coupled with inventory cuts which Chessen blamed on uncertainty in the fourth quarter regarding the government's likelihood of acting on the "fiscal cliff" issue.

Chessen said that inventories would bounce back in 2013, but that the government drag would continue. In part, the hike in payroll taxes will have an impact, at least in the first half. 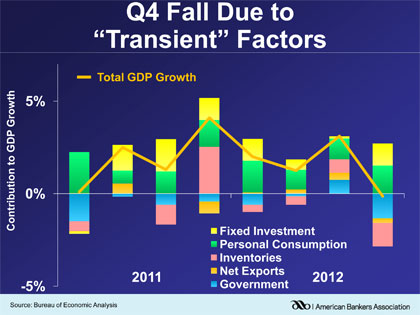 Federal policies impose a drag on an economy that would otherwise be showing a stronger improvement, according to ABA Chief Economist Jim Chessen. Click on the image for a larger version or click here.

Chessen calls the potential sequester a "self-inflicted head wound." But even in the absence of that step, the federal government's actions wreak havoc with the economy.

The economist pointed out that the deficit peaked at $1.3 trillion, and currently stands a bit under $1 trillion.

"Didn't you love the headlines about that?" asked Chessen. "Everybody was celebrating the fact that we are adding less to our debt than a trillion a year." He put up a PowerPoint showing a pair of lines charting the gap between federal spending and federal revenue.

"That was cause for celebration in Washington, D.C.," said Chessen. "I can't help but look at this chart and see a big python about to gobble up the world. I mean, doesn't it feel like that? And that's really the implication if we don't do something about it." 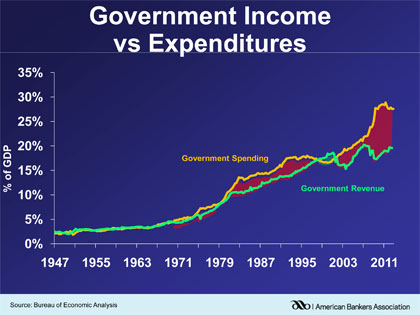 ABA's Jim Chessen worries about the economic impact of the deficit on the outlook for the domestic and international economies. Click on the image for a larger version or click here.

Chessen noted that even if the size of the deficit came in lower than the forecast levels (orange line below), it would still climb if only the effect of the sequester and the American Taxpaper Relief Act were applied (green line). Additional cuts would have to be found (light blue line) to shift the trend line's direction.

As Chessen portrayed the outlook, it appears that some measures to correct the nation's long-term problem--the federal deficit--could impede the economic recovery in the immediate term. As he elaborated on the deficit and factors contributing to it, the situation emerges as one guaranteed to produce pain no matter how it plays out. 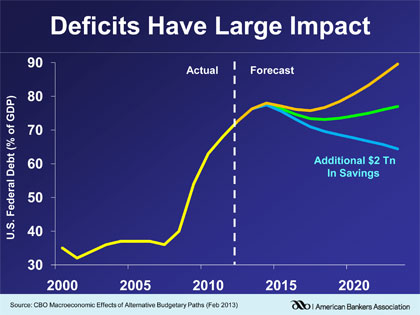 Only with additional savings can the government hope to begin reducing the deficit significantly, warned ABA Chief Economist Jim Chessen. The fiscal cliff legislation and the potential federal sequester don't provide enough relief. Click on the image for a larger version or click here.

Using exhibits blending Congressional Budget Office numbers and ABA analysis, Chessen presented scenarios where by the late 2020s the federal deficit could actually exceed U.S. GDP. The latter scenario could be seen if the green-line conditions in the exhibit above don't apply. A similar scenario would arise later-around 2046, as projected--in the green line conditions. The blue-line scenario, with multiple savings realized, would push the deficit down and avoid the 100%+ GDP trap that threatens.

In time, Chessen warned, absent meaningful action, there will be insufficient federal funds to pay for anything besides entitlement programs.

"They are overwhelming," said Chessen. "The unfunded liability of these programs is $61 trillion. That is greater than all the household net worth in this country today."

Chessen discounted those who rosily hope that the country can just grow out of such difficulties. 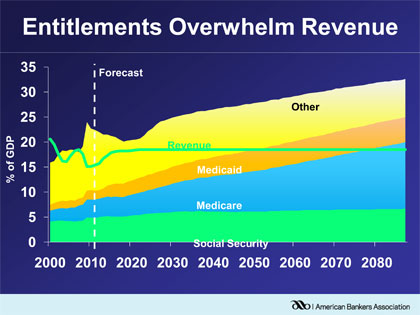 A dismal outlook awaits future generations unless the U.S. gets its act together. ABA Chief Economist Jim Chessen pointed out that federal revenue, as projected in the green line above, will be exceeded by total entitlements spending, as projected, in 2050. What's worse, according to Chessen, is that a big piece of the yellow zone in the chart above consists of interest payments due on federal borrowings. Click on the image for a larger version or click here.

"We are paying $200 billion annually in interest payments," said Chessen. "That will triple in the next decade or so." He said that if interest payments were broken out of the yellow section of the chart above, the payments and the entitlement programs would be all federal revenue could cover by 2025.

"Social Security isn't the biggest problem, and that's the easiest thing to solve, and yet there's been very little effort to try to solve it," said Chessen.

In the employment area, Chessen said that 8.7 million jobs were lost during the recession. "That was huge," he said, "and so far we've gained back only 5.5 million jobs. At the pace of job growth that we're at today, it will be August 2014 before we have recovered the 8.7 million jobs lost. Notice how close [the timing of] that is to the Federal Reserve's forecast in terms of when they think rates will change."

Chessen also pointed out that it took the economy four years to regain, and then surpass, the amount of income made before the recession--and now that is being produced with 6.5 million fewer people employed.

"It still stuns me every time I think of that, how we're producing the same amount of income with millions fewer workers," said Chessen. "We have a strong society if you can fully employ all of those people that were there before."

The labor force recovery differs markedly by region, according to Chessen. With a handful of exceptions, a broad corridor of states down the middle of the country have lower unemployment rates than the nation's edges.

"It's really the middle of the country that's doing well," in employment, he said.

"It looks like housing is coming back," said Chessen. "We'll start to build back some of what we had lost." He pointed out that the year-over-year growth rate in the Case-Shiller 20-City Index, a commonly used measure of housing market status, has been improving.

Chessen said that historically housing prices and household income had a strong and steady correlation until the beginning of the 2000s. During the first decade of this century housing prices pulled away from income, raising the ratio of prices to income.

More typical levels have returned in this decade, post-recession, though Chessen observed that home prices are beginning to kick up again. Citing data from the National Association of Home Builders, he said that a handful of states have seen an over-correction in prices,  and some an under-correction. But nearly half of the states have returned in having prices in line with income.

"The general pattern is that things are getting better," said Chessen.

"The big unknown" was Chessen's label for Europe overall. With 20% of U.S. exports going to Europe, he said, its future "has a huge impact for us."

"They keep lurching from summit to summit," said Chessen. "It's going to take a long time."

European Community leaders have thus far succeeded in avoiding any nation dropping out of the Euro, but the region's biggest challenge continues to be massive unemployment. "The unemployment rate is shockingly high for Spain, Greece, and Italy," said Chessen.

"China is slowing, even in spite of some good recent news," Chessen said. Chinese GDP has been declining steadily for five years, and exports have fallen.

"China is slowing," said Chessen, "and I rarely find anybody who believes the official numbers coming out of China about how fast their economy is growing."

In spite of all the issues covered, Chessen said his view was that the greatest threat to the economy came out of Washington.

"What is the biggest risk that we have? It's Congress, continuing to kick the can down the road," said Chessen. He said that Congress takes small steps on big matters and keeps pushing off big decisions for another day. As this article headed for publication, hopes were slim for any meeting of the minds in Washington, indicating that the automatic sequester would kick in on March 1.