Reserve releases have buoyed banks' earnings for the last three years, and some banks continued to benefit from the trend in the fourth quarter of 2012, but credit leverage might be finally waning for the industry.

Reserve releases had played a larger role in banks' past earnings seasons, though fourth-quarter 2012 provisions for loan losses still often dictated whether an institution beat or missed the Street's expectations.

It is unlikely that the recent pace of reserve releases will continue, though, as banks work through their excess reserves and national banks face pressure from the Comptroller's Office to curb the practice. Banks might also be forced to change reserve policies altogether if the Financial Accounting Standards Board's proposed reserve methodology becomes codified.

A sense of the trend

Coming into the 2012 fourth quarter, reserve releases for U.S. commercial banks and savings institutions had averaged $9.62 billion a quarter since the first quarter of 2010, when the overall level of reserves peaked, according to SNL data. Of the top 25 banks by market capitalization, 19 had reported earnings as of Jan. 23, and those institutions alone reported a net reserve release of $4.18 billion in the fourth quarter of 2012. The 125 publicly traded banks that have reported fourth-quarter 2012 results collectively released $4.31 billion of reserves on a net basis, SNL data show.

The three years of reserve releasing followed a period when banks substantially rebuilt their reserves not long after the credit crisis hit. Banks had to play to catch up since they ran down their reserves in the years leading up to the downturn.

The banking industry's reserve level reached its most recent low point at the end of the fourth quarter of 2006, when reserves totaled $77.61 billion, or 1.07% of gross loans and leases. Banks increased reserves steadily from that point forward, building them to a peak of $263.15 billion, or 3.51% of loans and leases, at the end of the first quarter of 2010.

The heightened level of provisioning served as a real drag on bank earnings. Banks' provisions for loan losses peaked at $71.64 billion at the end of the fourth quarter of 2008, when operating revenue totaled just $139.61 billion. At that time, banks' provisions equaled over 50% of their revenue bases. That ratio held fairly stable, hovering above or slightly below 40% over the next four quarters, through 2009.

Banks' provisioning levels began to decline substantially after that, decreasing approximately 21% in both the first quarter and second quarters of 2010. 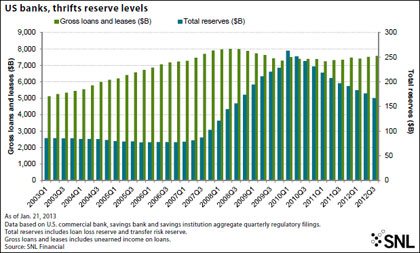 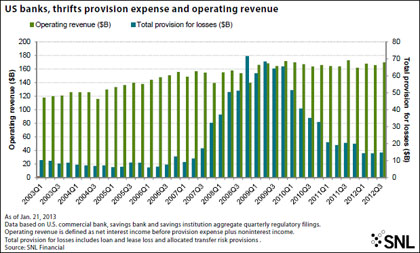 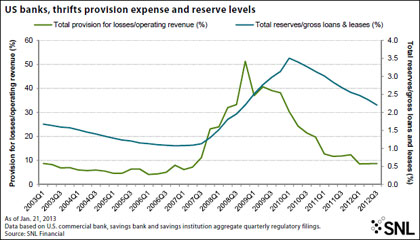 Continued decreases in provisioning followed, and banks began to release their reserves as well, offering a real boost to their bottom lines. Banks capitalized on the credit leverage, as the Street often refers to it, decreasing the aggregate amount of their reserves for 10 straight quarters through the third quarter of 2012.

Reserve releases helped other banks top analyst estimates as well. JPMorgan Chase & Co. handily beat the Street in part due to larger-than-expected reserve releases. While the company's revenues also exceeded many analysts' estimates, the investment community said JPMorgan's reserve release bolstered earnings by 17 cents per share, which accounted for nearly half of the company's upside to the consensus estimate.

Some haven't opened tap all the way

Meanwhile, some other institutions slowed their reserve releases notably in the fourth quarter of 2012 and the lack of credit leverage helped keep their results well below the Street's expectations. For instance, Citigroup Inc.'s net reserve release fell to $86 million from $1.51 billion in the prior quarter and $1.47 billion a year earlier.

Citi CFO John Gerspach said on the company's fourth-quarter 2012 earnings call that the institution wants to make sure positive economic trends are sustainable before releasing reserves. He noted that Citi hoped to see a resolution to the fiscal cliff issue but officials essentially kicked "the can down the road."

"So I think that what we would like to see now is how the U.S. deals with the ongoing debt ceiling debate and the upcoming sequester on expense reductions. We get through that and we see how the economy performs and we see whether or not those trends that we see now are sustainable, and then we've got decisions to make," Gerspach said on the call, according to the transcript.

The nation's largest banks do believe they have some pieces of credit leverage left on their balance sheets. JPMorgan and Citi noted that their reserve releases are largely finished in their credit card businesses, but the companies believe there could be more reserve releases in their mortgage businesses depending on the strength of the housing market. Other banks such as PNC Financial Services Group Inc. have said they could see reserve releases tied to commercial loans.

Comptroller Curry has his eye on reserve releases

The overall level of reserves on bank balance sheets are unlikely to return to the levels witnessed before the downturn though. Comptroller of the Currency Thomas Curry noted in early November 2012 that his agency is watching the trend closely.

"It would be short-sighted to say that banks and thrifts can't engage in some level of reserve releases," Curry said at the 8th Annual Community Bankers Symposium in Chicago. "But I have warned on several occasions lately that we are monitoring this trend very closely, and we're ready to take action if necessary."

Some banks have recognized that reserve levels are not returning to the levels witnessed before the credit crisis. For instance, Regions noted on its fourth-quarter 2012 earnings call that it expects the banking industry's reserves to settle at a level "something north" of 1.5% of loans.

FASB's proposal could change the landscape

Before the dust settles, reserves could even potentially see a one-time increase, if the FASB has its way.

The agency has proposed a new reserve model that it believes could increase reserves by as much as 50%. Whether the FASB proposal will go into effect, and when, remains unclear, and most large banks to date have abstained from commenting on the issue since they expect the actual implementation will come a few years down the road.