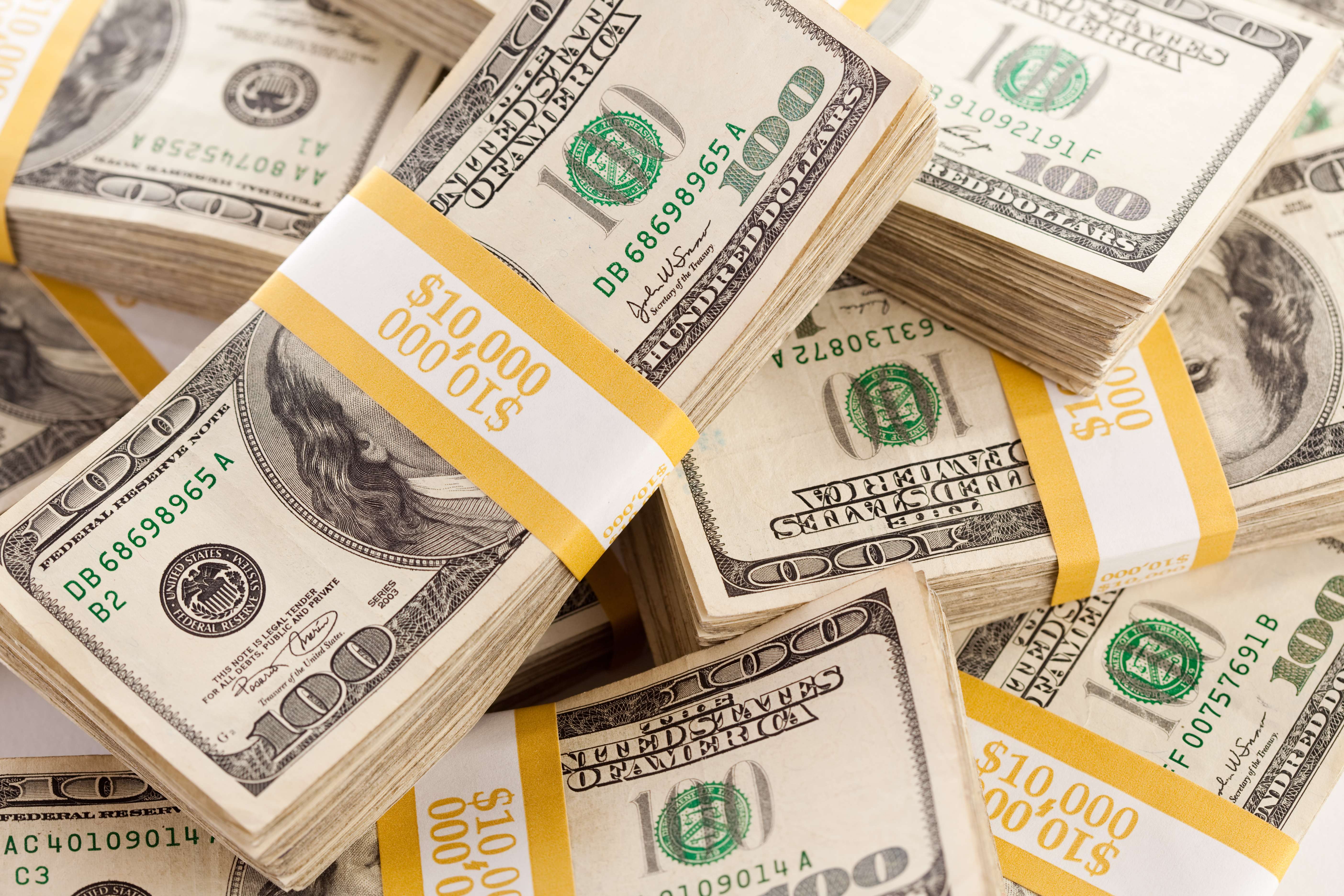 By Nathan Stovall and Andrew Wolcott, SNL Financial staff writers
The U.S. banking industry as a whole remains fairly well-prepared on paper for the capital impact of Basel III. However, smaller banks would be more severely affected by the proposals and many institutions of all sizes will find the complex nature of the proposed capital standards more troublesome to deal with than the current federal framework.

The proposed Basel III rules have drawn stiff criticism in the last month or so. Opponents have argued that the proposed capital regime will not effectively protect against systemic risk; could even add volatility to banks' capital bases; and could possibly even cause community banks to seek merger or acquisition.

The vast majority of the industry, in terms of assets, and in particular larger institutions, continue to be prepared from a capital quantity standpoint to weather the implementation of Basel III on a fully phased-in basis, according to an analysis conducted by SNL Financial.

Both the "conservative" and "moderate" scenarios took into account provisions outlined in the proposed rules, such as new risk-weightings of assets and the deductions of certain items from Tier 1 common capital if they exceed 10% of a given company's Tier 1 common capital. The latter include certain deferred tax assets, mortgage servicing assets net of associated deferred tax liabilities, and other items.

To conduct the analysis, SNL developed a model that calculates capital ratios under Basel III. A range of assumptions was used to determine possible impacts to capital. All assumptions are universal and applied to each company. (In actuality, assumptions will vary from company to company.)

Under SNL's moderate-scenario analysis, no deferred tax assets are considered related to operating losses and tax credit carry forwards. All one-to-four-family loans are considered to be "category 1" loans; loan-to-value assumptions are low; and high-volatility commercial real estate is low. ("High volatility" refers to credit facilities that finance the acquisition, development, or construction of real property.)

The conservative-scenario analysis categorizes a portion of deferred tax assets as related to an operating loss and tax credit carry forwards. Fewer one-to-four-family loans are considered "category 1" loans; loan-to-value ratios are higher; and high-volatility commercial real estate is high. The analyses treat Basel III as if it were presently implemented; however, it will not be in full effect until 2019.

SNL's analysis found that larger banks' capital bases seem better prepared for the implementation of Basel III, but even a few of the nation's largest institutions, those with more than $250 billion in assets, might need to build their capital to meet the minimum requirements under SNL's "conservative" scenario.

The earn-back period under the conservative scenario is shorter because a greater number of banks nearly meet the minimum Basel III requirements under that scenario. 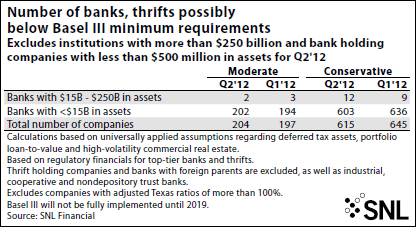 SNL tried to measure how the average, relatively healthy banks stacked up against the Basel III requirements and accordingly excluded banks with adjusted Texas ratios--which excludes government guaranteed loans--in excess of 100%, a widely considered threshold at which banks tend to fail. (The analysis excluded those institutions, foreign-owned entities, and bank holding companies with less than $500 million in assets.) SNL found that 603 U.S.-based banks with less than $15 billion in assets would fall short of the minimum Basel III requirements under the "conservative" scenario, down from 636 at the end of the first quarter, while 202 banks would fall short under the "moderate" scenario compared to 194 in the linked quarter.

Impact worse below the megabank level

As a whole, SNL found that the group of banks under $250 billion in assets, excluding BHCs with less than $500 million in assets, would fall short of the minimum capital requirements under Basel III.  SNL's analysis determined that the capital shortfall would be $10.00 billion, or 0.92% of their risk-weighted assets under the "conservative" scenario at the end of the second quarter, down from $10.91 billion, or 1.17% of their risk-weighted assets in the first quarter.

Smaller banks, those with less than $15 billion in assets, actually account for a significant portion of the shortfall despite their smaller size, SNL's analysis found. The capital shortfall of those institutions based on second-quarter data would be $5.32 billion, or 1.32% of their risk-weighted assets compared to $5.39 billion, or 1.34% of risk-weighted assets at the end of the first quarter. The larger relative hit for that group of institutions is not too surprising, since many did not expect they would have to comply with Basel III, or at the very least, believed that their trust preferred securities, which would lose their regulatory capital status under the proposed rules on a phased-out basis, would remain grandfathered as regulatory capital under the Dodd-Frank Act.

Complexity of rules hits many

Even though the capital impact is more significant for smaller banks, critics believe the complexity of the Basel III rules pose an even greater threat to smaller institutions. Many institutions and trade associations have argued in numerous comment letters to regulators on the proposal that small banks are simply ill-equipped to adjust to the proposed capital regime, particularly at a time when the industry already faces so many changes on the regulatory front.

The Missouri Independent Community Bankers Association noted in a letter to regulators that the proposal will cause consumers and small businesses to face higher borrowing costs and less availability of credit at a time when the economic recovery is tenuous. While larger banks can absorb compliance costs more efficiently, the association said the proposed rules will also place a larger burden on community banks and likely hurt their access capital in the future.

"This is a remarkably complex and cumbersome proposal, and the requirements for compliance and adherence will significantly add to an already untenable level of regulatory burden and cost for community banks," the association wrote in the letter.

Others such as James Hamby, president and CEO of Ada, Okla.-based Vision Bancshares Inc., have gone a step further, noting at a recent conference that without changes to the regulatory regime, community banks will be "going the way of the dinosaur."

Regulators have tried to help banks prepare for the changes and recently  released a tool to help banks estimate the impact of proposed Basel III rules on their capital ratios.

However, other critics say that the complexity in calculating the changes from Basel III is not the largest problem facing the industry. They argue that the new capital regime might fail to capture risks in the system and possibly bring unintended consequences.  (Editor's Note: Visit ABA's Basel III page, including both the regulatory calculator and ABA's own 12-point guide sheet, here.)

Sandler O'Neill  investment bankers argued that, among other things, many Basel III rules conflict with Dodd-Frank rules regarding stress-testing, the phasing out of trust preferred securities as Tier 1 capital, and rules for mortgage loans. They suggested that differences over the latter could stall the recovery in housing.

The Sandler bankers expressed even greater concern over the provision in the Basel III rules that will cause accumulated other comprehensive income, or AOCI, which captures unrealized gains and losses of banks' available-for-sale securities, to flow through regulatory capital. They said that provision will create "perverse" incentives for banks to reduce price volatility by engaging in such practices as shortening the duration of their investment portfolios, which could impair long-term capital formation; enlarging held-to-maturity portfolios, which would reduce balance sheet flexibility; and even substituting credit risk for duration risk to maintain yields.

Still, the biggest upheaval over the Basel III rules have stemmed from recent  comments from FDIC Director Thomas Hoenig. He urged regulators to scrap existing Basel III proposals, calling them a continuation of the poor record of Basel I and II but with more complexity. He advocated regulators simply use a high minimum tangible common equity ratio. (Editor's Note: To read Hoenig's comments, go to our "UNconventional Wisdom" blog.)

Outlook for the issue

If that did come to pass, small institutions will almost certainly be close to prepared from a capital standpoint to comply with Basel III, at least according to SNL's analysis.

However, if critics are right, a delay might not be enough and small and large banks alike will have to wait and see if the provisions prevent systemic risk or slowdown the recovery and make their capital bases more volatile. 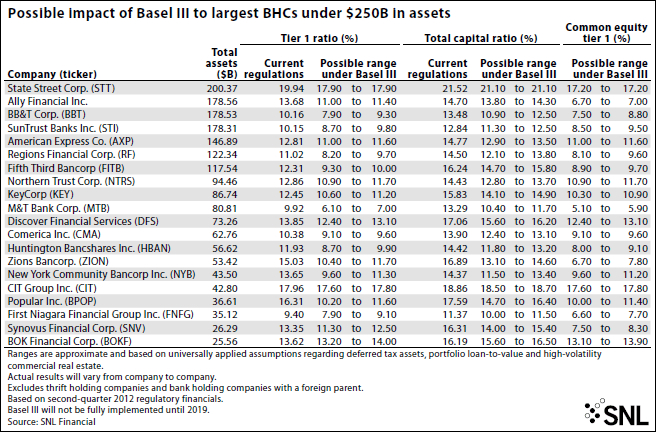 [This article was posted on October 2, 2012, on the website of Banking Exchange, www.bankingexchange.com, and is copyright 2012 by the American Bankers Association.]