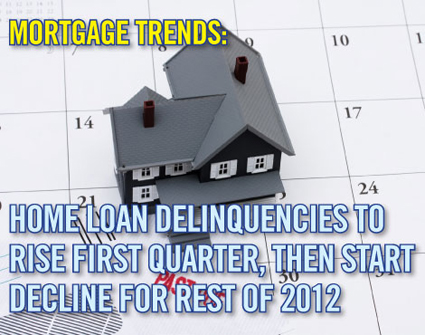 Bank credit card delinquencies, in part reflecting consumers’ desire to hold onto their card credit relationships and the increased difficulty in obtaining new accounts, are expected to remain steady and stable throughout 2012.

Both projections come from TransUnion’s Trend Data research. Trend Data is a database of 27 million anonymous consumer records randomly sampled each quarter from the company’s national consumer credit database. Mortgage delinquencies are defined by TransUnion as loans past due for 60 days or more, while the standard for bank-issued credit card delinquency is 90 days or more.
Mortgage delinquency trend and forecast
Mortgage delinquencies peaked in the latter part of 2009, and declined for six straight quarters after that. As shown in the accompanying graph, they have been climbing since the end of the second quarter of 2011. TransUnion projects that the measure will continue its rise through the first quarter of 2012, peaking at 6.02%, but that it will then fall over the rest of the year.

Click here to enlarge image
Declines in delinquencies will be seen in 38 states, TransUnion projected. The report indicated the highest percentage declines would be seen in Arizona  (-46.25%) Wisconsin (-45.52%) and Colorado (-40.34%). The report said that 12 states and the District of Columbia are expected to see delinquencies rise.

TransUnion’s announcement noted that mortgage delinquencies typically represent a precursor to foreclosures. One factor affecting data has been the “robo-signing” controversy, according to Trans Union Group Vice-President Steven Chaouki.

The executive noted that with many of the affected borrowers’ cases on hold, those mortgages have resided in the delinquency ranks longer. Absent the delay, he said, many of those borrowers would have been  foreclosed on, and the loans charged off. Chaouki said it wasn’t possible to tell precisely how much of an effect this had had on the numbers, and that the indications he cited were based on anecdotal evidence.

“Although house prices and unemployment will likely face continued pressure next year, this forecast calls for gradual improvements in the second half of 2012 to other key variables, like improving credit quality of new originations, consumer confidence, and GDP, that will positively influence homeowner’s ability and willingness to pay their mortgages.”

While this is good news, Chaouki pointed out that the projected levels are “not enough to bring us back to where we want to be as a country.” He said that normal delinquency levels, at least historically, have been in the range of 1.5% to 2%.

TransUnion data, as reflected in the graph above, indicates 7% year-over-year declines in delinquency levels in both 2010 and 2011. By contrast, 50% year-over-year increases were seen between 2006 and 2009.

Chaouki, asked if further crisis in Europe or here might throw the projections off, said such idiosyncratic shifts can’t be measured or forecast reliably.
Bank card delinquencies fall to 17-year low
Credit card delinquency rates fell to the lowest level in 17 years in the second quarter of 2011 and TransUnion projects that they will continue to remain relatively low in 2012. The report said they would fall from 0.74% in the final quarter of 2004 to 0.69% in the last quarter of 2012.

“Credit card delinquencies are expected to remain fairly steady in 2012, ranging between 0.69% and 0.76%--levels far below those typically observed in the last 15 years. In today’s uncertain economy, consumers have found that credit cards are among their most valued assets due to the flexibility they provide. As a result, consumers have made a concerted effort to make on-time payments and maintain relatively low balances. In fact, credit card debt per borrower in the third quarter of 2011 stood at $4,762, approximately $1,000 less than the second quarter of 2009, the quarter in which the recession ended.”

Only 11 states are expected to see increases in credit card delinquencies.
The preference to safeguard credit card relationships, even over home loan relationships, was highlighted in an earlier TransUnion study. Read our story about that research here.
[This article was posted on December 9, 2011, on the website of Banking Exchange, www.bankingexchange.com, and is copyright 2011 by the American Bankers Association.]