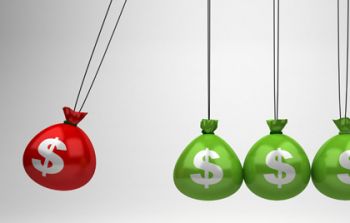 Often used as an executive toy, this device, known as "Newton's Cradle," illustrates the British thinker's third law of motion. Author Patrick Ward sees a connection for ALCO managers too.

In the late 1600s, Sir Isaac Newton published the Three Laws of Motion, the third being,  "For every action there is an equal but opposite reaction."  Newton was describing a set of physical laws as they relate to the motion of bodies under a system of forces, meaning that for every force there is a reaction force that is equal in size, but opposite in direction.

Why bring up Newton, not known for being an ALCO manager?

Quick refresher for those who do not deal with investments on a regular basis: When a bank purchases a security for its investment portfolio, it must classify the instrument into one of three categories:

1. Trading: Debt and equity securities that are held for the purpose of selling them in the near term are classified as trading securities and reported at fair value, with unrealized gains and losses included in earnings.

2. Held to Maturity (HTM): Debt securities that the bank has the intent and ability to hold to maturity are classified as held-to-maturity securities and reported at amortized cost.

For the most part, trading accounts are not usually associated with community banking; as such, the rest of the article will focus only on HTM and AFS portfolios.

More specifically, a key question is whether, by moving bonds to HTM versus AFS, is your bank shielding risk?

With the onset of the financial crisis that began in 2007, the Federal Reserve lowered its targeted Fed funds (short-term) rates from 5.25% in September 2007 to 0.25% in December 2008, where it remains today. Furthermore, the first increase in the targeted Fed funds rate is not expected until mid-2015--or sooner should the Fed's guidelines of the unemployment rate fall below 6.50% and/or inflation is running higher than 2.50%.

The dilemma is that banks' balance sheets--specifically community banks' balance sheets--are not built to withstand the prolonged ultra-low interest rate environment that the industry has been facing. As a result, banks' net interest margins and net interest income (NII) continue to come under enormous pressure as business costs continue to increase. Banks are being forced to make strategic decisions today in order to offset the margin compression that may have longer-term consequences in a rising-rate scenario.

We are seeing a number of banks resort to lengthening the duration of their investment portfolios as a way to generate additional interest income needed for current budget/profit plans. In addition, some banks are moving out on the credit curve, looking for additional yield, as they rotate cash flows out of U.S. government-guaranteed securities and into municipal or corporate securities.

While banks have applied these strategies, the Federal Reserve has simultaneously ushered in the policy known as Quantitative Easing (QE) as a way of driving down long-term treasury rates and, subsequently, mortgage rates, in order to stimulate borrowing to drive consumption resulting in future economic growth greater than the current sub 2% GDP number. The Federal Reserve is currently on its third round of Quantitative Easing (QE3) since 2008 and is buying roughly $85 billion dollars of securities per month ($45 billion in longer dated treasuries and $40 billion in agency mortgage-backed securities (MBS).

An experiment in the capital markets

Here's where Sir Isaac's theory comes in. When banks increase the duration of their investment portfolios, by definition, they increase the potential price risk when interest rates move higher (assuming a positively-sloped yield curve). Using Newton's analogy of opposite forces, what happens to unrealized gains/losses in banks' investment portfolios after the bond market sells off when QE3 ends (in reality or perception)?

From April 30, 2013, to May 31, 2013, we witnessed the 5-year treasury note increase from 0.68% to 1.05%, followed by a further increase to 1.41% as of June 28, 2013. This was a direct result of comments made by Federal Reserve Chairman Ben Bernanke along with other various Fed officials regarding reducing the amount of bond purchases within QE3.

Simply put, volatility is back in the marketplace.

So what's the fallout?

As of today, unrealized gains/losses in the AFS portfolio are not included in regulatory capital. However, many banks are thinking more carefully about tangible equity (inclusive of AFS gains/losses) in terms of the impact it might have in M&A scenarios.

How "bad" might the impact of continued rising rates be?

Using your June month-end portfolio gains or losses as a starting point, it would a good time to review your investment analytics to see any future impact should rates increase further by another 100 basis points, 200 basis points, or 300 basis points.

Depending on the results, determine your comfort level, given the size of your AFS portfolio, for reported capital ratios. This must take into consideration the corresponding capital adjustment, including the recent bond market sell-off.

Further, the pro-forma impact on tangible common equity might have an impact on pro-forma performance metrics that could affect bank stock valuations and throw a wrinkle into M&A activities.

At the very least, it is a good time to review potential outcomes of AFS unrealized losses  that are building and the options your bank may want to pursue depending on resulting concerns.

While not exhaustive, the following list of general options presents ways that bankers can manage the impact the bond portfolio will have on capital:

Depending on your capital levels and outlook, you may feel comfortable that your institution can handle the AOCI changes in the relatively short term, knowing that any securities with losses will come back to par as the maturity date nears.

2. Move securities from AFS to HTM.

Banks have the ability to reclassify securities that are currently in AFS into HTM,  which will then be reported at amortized cost along with any gain or loss segregated into AOCI written up or down over the remaining life of the security.

Once a security is moved to HTM, the bank loses the flexibility of selling it for any balance sheet management purposes other than the safe harbor rules.

It may be a worthwhile exercise to identify the securities that have the biggest potential change in price in an upward move in rates as possible candidates for transfer to HTM.

Given the potential price loss in an up 300 bp scenario, it makes sense to review any securities considered for purchase to determine your threshold for potential unrealized losses. Again, using the same criteria as #2,  if  you have a security with a 15%-18% or greater negative change in price in an up 300 scenario, you may want to consider moving it to HTM at the time of purchase.

An additional factor to ponder: Should the U.S. get a weaker than expected GDP number or an anemic unemployment number in the coming months, it would not be unreasonable, given the volatility,  to see interest rates move back down as fast as they went up.

Basel III update: a break for many banks

Community bankers were concerned with the Federal Reserve's original Basel III proposal, which among other things called for unrealized gains / losses from the AFS portfolio to be included in regulatory capital.

Under the Fed's final rule (issued July 2nd), banks that have less than $250 billion ("Non-advanced Approach Banks") will be allowed to take a one-time election to not include unrealized gains / losses from their AFS investment portfolios within regulatory capital.

As we have seen over the last few months, changes in the level of interest rates have increased the volatility associated with the unrealized gains / losses within banks' AFS portfolios.

Expectations are that the vast majority of banks would opt out as a way of reducing volatility in their regulatory capital.

Even with this latest rule, community banks should still be reviewing the price risk of their AFS portfolio for potential losses relative to their investment and/or capital policies.

Sir Isaac in your boardroom

Sir Isaac framed his laws based on irrefutable scientific facts, and for the centuries that have followed mankind has benefited from knowing that "for every action there is an equal and opposite reaction."

Bankers and their advisors do not have the luxury of knowing what the future holds. We do know that volatility is likely going to be higher than past years.

Every bank has its own unique characteristics and management must have a clear understanding of all of the issues involved to make any necessary changes that best suit their individual institution. What I've outlined in this article are solely guidelines.

The challenge isn't enviable. In today's conditions, bankers have to deal with multiple Fed policies and unclear "Fed-speak." All this happens against a backdrop of volatility, potential regulatory changes, higher compliance costs, and declining margins. All while trying to maintain earnings in a zero-rate environment.

Patrick Ward is a Managing Director at Darling Consulting Group. His primary focus is providing balance sheet management to financial institutions. He utilizes his 30 years in banking to provide advice in the areas of pricing, fixed income, asset liability management and capital. Prior to joining DCG, he was a senior vice president of a large publicly traded regional bank in New York where he developed, executed, and evaluated all of the bank’s ALM strategies and tactics. In addition, he directed the bank’s fixed income portfolio ($1.4 billion) and participated in several M&A due diligence reviews.