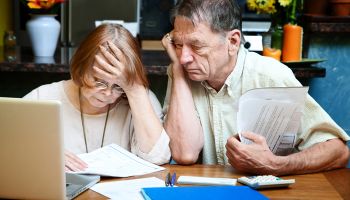 TransUnion’s latest payment hierarchy analysis indicates nearly even tendency by people with financial woes to pay their mortgage or credit card debt. Auto loans still have first call on their dollars, however.

Jugglers of consumer debt have started to shift their preference pattern again, according to the latest “payment hierarchy” study by TransUnion LLC. For the first time since the housing collapse, troubled borrowers are making their mortgage payments about as much as their credit card payments. Company analysts anticipate that in time—probably by the end of 2013—consumers will be paying mortgages ahead of credit cards again.

Implications are significant. Company researchers believe this not only bodes well for the economy, but for lenders who wish to pursue mortgages—and even consumer lending—more aggressively. This includes first mortgage loans as well as home equity credit. That’s because the shift seen nationally seems to be the result of a rising tide that favors all types of outstanding debt, not the result of a shift from one debt preference to another at the detriment of payment of the first.

Researchers found that the new trend ties in very directly with the strength of economic recovery at the regional level.

Overall, “this is really positive news for lenders,” said Steve Chaouki, co-author of the TransUnion study and group vice-president in the company’s financial services business unit, in an interview. “They will have the opportunity to lend more as delinquencies drop.”

On a cautionary note, Chaouki noted that should housing prices get into trouble again, lenders would likely see a return to a preference to preserving credit card lines over staying current on mortgage payments.

One can debate the psychological impact of the recession on consumer borrowers, but underpinning the new overall trend is improvement in home equity, according to Chaouki.

Traditionally, lenders believed that consumers would above all else work to keep current on their home loans, but that pattern eroded significantly during the Great Recession, according to earlier TransUnion research into what troubled borrowers prioritized.

Starting in 2008, behavior had flipped. Troubled borrowers with both a credit card balance and a mortgage were more likely to become delinquent on their home loan than on their credit card. The reasoning, TransUnion analysts found in past studies, was that the popping of the housing bubble left them less, or nothing, to preserve of their own. This was especially the case where new mortgage types got people into homes with less personal investment. In addition, consumers saw that card delinquency could result in rapid loss of available liquidity, while foreclosures due to mortgage default were seen as delayed. Multiple factors contributed to the lag, including sheer volume, attempts to rehabilitate nonperforming mortgages, and government moratoria.

With no skin left in the game on the mortgage front—and loss of stigma over foreclosures—the borrowers leaned towards preserving their credit card relationships as a source of liquidity. Further, auto loans had become consumer borrowers’ top priority, typically going delinquent last in the samples TransUnion analyzed.

“When your greatest asset, your home, becomes your greatest liability, it’s not a surprise that that would happen,” said Chaouki in an interview. Ultimately, he says, “it’s all about protecting your assets.” Hence, while Americans wouldn’t want to live in their cars, they wanted to preserve the value embedded in their vehicles in the face of economic erosion and uncertainty. Credit card liquidity became something of a quasi-asset along the way.

Now, a reversal looms. TransUnion said that its latest research indicates that consumers in financial distress have begun putting increased value on paying their mortgages over their credit card debt. The research reinforced indications of a correlation between ups and down in home prices and troubled consumers’ preferences for mortgages over credit cards.

The company’s latest study relies on an evaluation of groups of borrowers and evaluation of the spread in delinquency levels over the January 2008-December 2012 period. Consumers evaluated held mortgage, credit card, and auto debt. The study’s key findings, summarized in the nearby chart, indicate that mortgage delinquencies have fallen to nearly the same level as credit card delinquencies.

To this, researchers added a comparison to Standard and Poor’s Case-Shiller 20-city Home Price Index.

“Looking at the delinquency spread in comparison to housing prices, we observed an interesting pattern with three phases: rapid increase, stabilization, and rapid decrease,” said Ezra Becker, co-author of the study and TransUnion’s vice-president of research and consulting. “These three phases of delinquency behavior appear to be primarily driven by the evolution of home prices.” 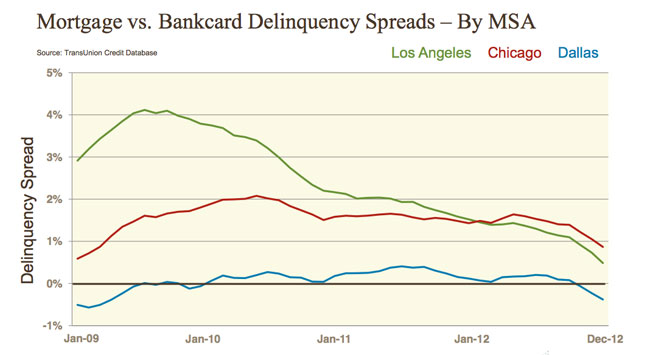 Download the complete TransUnion report on these findings [registration required] 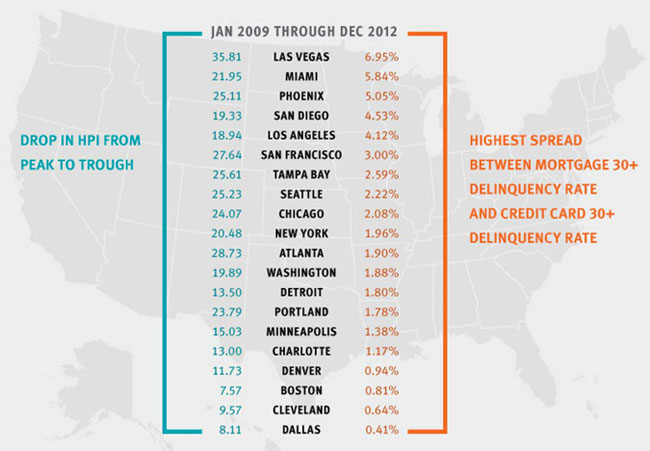