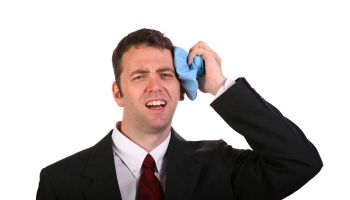 Loss-sharing deals struck with FDIC have proven a challenging deal for the agency’s partner banks.

Many banks have had their issues with FDIC loss-share agreements, and those concerns likely will not disappear after the agreements expire.

Banks still hold billions of dollars in assets covered under loss-share agreements and need to work hard to squeeze out the value of the assets before the agreements expire. 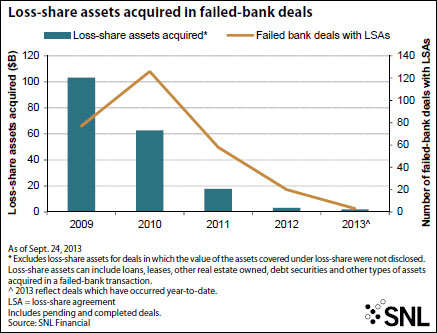 When the agreements expire, banks will still have to manage the assets tied to the agreements in accordance with the terms FDIC laid out in the contracts. That means that banks likely will not be able to purge those assets through bulk sales after loss-sharing ends.

Bankers had hoped that they could purge their balance sheets after the fourth anniversary of commercial loss-share agreements was reached. The agreements included a provision that allowed banks to sell shared-loss assets in bulk, subject to FDIC approval.

Barr also said that the provisions that are in place for assets covered under loss-share agreements will remain in place even after the agreements expire. That likely will keep bulk sales from occurring then.

Real estate values have risen in some of the most heavily hit markets like Georgia and Florida, but banks looking to foreclose on properties in some states with judicial review have faced a long and arduous process of working through those assets.

In Florida, for instance, foreclosing on some assets took almost 1,000 days at the peak of foreclosure filings, advisers say. The timeline has since improved and real estate prices have rebounded from the depths of the credit crisis.

At the point of expiration, banks will also have to write down the receivable that accounts for the value of loss-sharing—deemed an indemnification asset—to zero, assuming banks have not squeezed out all the value of the agreement when taking losses on the management of covered assets. Randy Dennis, president of DD&F Consulting, which has assisted banks on many failed-bank deals, said banks seem confident they will have realized most of the value of their loss-share agreement before it expires.

"Most of the banks I talk to feel pretty good that they have recognized the losses and the market is turning around. They're breathing a sigh of relief. They don't think their indemnification asset is going to bite them. But we are actually seeing some recoveries," Dennis said. "Most banks seem to be fairly comfortable with where they are in the life cycle of their loss-share."

Accounting for loss-sharing is a bear

The accounting for loss-sharing has been the bane of many bankers' existence, but loss-sharing clearly helped FDIC market failed banks and raised the offers that acquirers made when bidding on failed institutions. FDIC estimates that loss-share has saved in excess of $41.1 billion, compared to an outright cash sale of those assets.

Many bankers on the conference circuit bemoan having participated in loss-share deals, given the complex accounting, limitations on managing assets and substantial infrastructure and cost required to accurately report on the pools under loss share. Bankers now look at loss-sharing quite differently at this point in the cycle, and most institutions are no longer including loss-sharing when bidding on failed banks.

Several advisers that SNL spoke with noted that acquiring an institution without loss-share at this point in the cycle is just less expensive because it does not require the substantial infrastructure required to manage loss-sharing. Since 2012, loss-share agreements have been attached to just 33.9% of failed-bank deals, compared to 73.9% between 2009 and 2012, according to SNL data.

Advisers say FDIC has discussed terminating loss-share agreements on small pools of covered assets—often as little as $20 million—to reduce the expense of managing loss-share for both parties. However, few of those deals have occurred because the agency and banks disagree over what value is left in the contract.

Advisers say FDIC has resumed discussions with banks that still have small amounts of covered assets under loss share. Barr said that both the FDIC and the institution has to agree voluntarily to end the loss-share agreement and the idea came after receiving feedback from smaller acquirers who contacted the agency after dealing with the detailed reporting requirements associated with loss-sharing.

"Once we got that feedback we did start contacting some other acquirers on our own. We took a more proactive approach," Barr said.