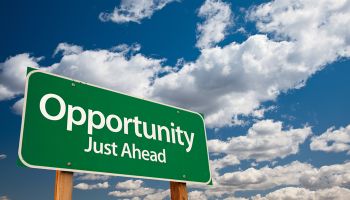 While other potential acquirers may have had a look at First National Bank, investor Gerald Ford saw a deal he couldn’t pass up.

Gerald Ford's successful September bid for the largest bank failure in Texas in years is a return to his roots as a turnaround executive and marks the beginning of his latest project's statewide expansion.

Dallas-based Hilltop Holdings Inc. unit PlainsCapital Bank agreed to assume all the deposits and about $2.7 billion in assets from Edinburg, Texas-based First National Bank on Sept. 13. First National is PlainsCapital's first acquisition under Ford's leadership, but his investor group has bid numerous times on failed banks.

Observers told SNL that the First National acquisition has many of the same trappings of Ford's turnaround strategy and is the apparent first step in transforming the bank to a statewide institution barely brushing the $10 billion-asset threshold. Hilltop has $7.40 billion in assets; PlainsCapital has $6.84 billion in assets.

First National's troubles were well-known to those in the Texas banking industry and "multiple inquiries" were made about "picking off a few branches here and there," said Jacob Thompson, managing director of investment banking at SAMCO Capital Markets. There was always the possibility of failure, but the potential increased after its June 30 call report showed the leverage ratio dipped below 2%. Thompson said SAMCO did not have an advisory role involving any prospective deal with First National. 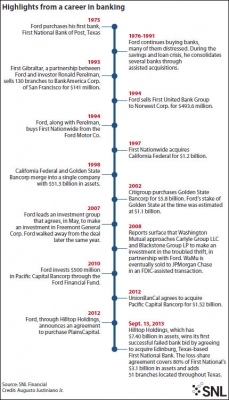 "I'm assuming [First National] went through all the various scenarios, but I would say especially over the last 30 [days] to 45 days, the feeling of 'Something's going to happen; it's just a matter of time' really intensified," he said. "Ultimately, I think the sentiment of the marketplace was they were too troubled to make a whole-bank deal make sense for everybody, so [potential buyers wanted to] see what sort of deal [they could] make with the FDIC."

First National is the third-largest bank failure in Texas since 2007, dwarfed only by Guaranty Bank and Franklin Bank SSB, and is the 24th-largest failure in the U.S. over that time. Failures overall continue to occur at a slower pace, with 22 failures year-to-date, including the two Sept. 13, compared to 51 in all of 2012, according to SNL data. The use of loss-share has declined, SNL found: Only three of 22 failures in 2013 featured such a component, compared to 20 deals in 2012.

The deal falls into Ford's wheelhouse and has a similar setup to his prior feats, most recently Santa Barbara, Calif.-based Pacific Capital Bancorp, now owned by Mitsubishi UFJ Financial Group Inc. The formula involves an acquisition or recapitalization of a troubled name, a complete turnaround and, finally, a sale at a premium.

Thompson said "from what we understand" Ford has looked at acquiring other failed banks, performed due diligence and submitted bids, only to lose. SNL data show Ford's investor groups have bid in at least three other failed-bank deals: Guaranty Bank, First Federal Bank of California FSB in 2009, and Midwest Bank and Trust Co. in 2010.

The First National deal could add about $1 in accretion to tangible book value per share and 14% to 2014 EPS estimates, wrote Sterne Agee & Leach Inc. analyst Brett Rabatin in a Sept. 15 report. The diversification could ease investors' concerns about mortgage banking, which constituted about a third of earnings last quarter excluding insurance losses and allows the bank to deploy excess capital. He wrote he was "surprised something this attractive from a financial perspective ended up being available (and still with a loss share)." His modeling assumes 75 basis points ROA on acquired assets.

The deal is PlainsCapital's first acquisition following the 2012 sale to Hilltop. That deal was "entirely the opposite" type of acquisition for Ford, said Stephens Inc. analyst Matt Olney, because PlainsCapital was a high-performing, profitable institution that carried a 145.8% price to tangible book value at completion.

"[First National's acquisition] is more his style in terms of buying something on the cheap that's had some issues. It's more of a turnaround, and that's what he specializes in," he said. "I would argue PlainsCapital was kind of the unusual transaction for his history."

Details about Ford's plan for his newly expanded footprint are scarce, and Ford did not immediately return phone calls for comment on this article. Olney pointed out PlainsCapital will now have close to $10 billion in assets. It is also transformative on a geographic basis, expanding a Dallas-centric footprint to one with coastal and border locations and bulking up its presence in existing markets.

"Looking at Gerald Ford's history, I expect him to sell at some point when the time is right," Olney said.

Who else tried for the target?

It remains unclear what other banks and investor groups, if any, bid on First National, but observers told SNL that the branch footprint alone would have generated substantial interest. But Thompson pointed out that active acquirers such as Prosperity Bancshares Inc. and Cullen/Frost Bankers Inc. have been sidelined with integration efforts of their own and have veered toward acquiring healthy franchises using their strong currency.

Olney added private equity interest may have taken a look at the bank because of the immediate scale it offered and the scarcity of a Texas failure this far into the credit cycle and pointed out Cadence Bancorp LLC has built its franchise throughout the Southeast through M&A.

First National's size and location could make its failure a one-off occurrence. Thompson said although there are several other troubled names in Texas, none so far have generated the amount of chatter that surrounded First National before its failure. 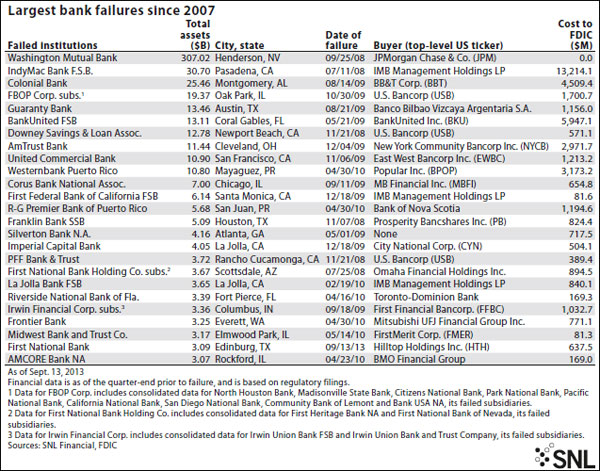