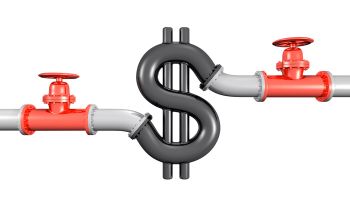 You might think, “If you can’t foreclose, you can’t lend,” but lenders are still making mortgages even where they can’t seize homes. However, the pace is slower in such locales.

Metro areas in states with judicial foreclosure processes have seen longer, more bloated delinquency pipelines, but loan growth does not appear to have suffered greatly.

Comprehensive mortgage data, as required by the Home Mortgage Disclosure Act, was recently released for 2012. Of the nation's 50 states, 24 employ a judicial foreclosure process, according to LPS Applied Analytics. In total, there were 942 defined metro areas with data, excluding Puerto Rico. Of those 942 metros, 32 areas include multiple states that do not use the same foreclosure process. 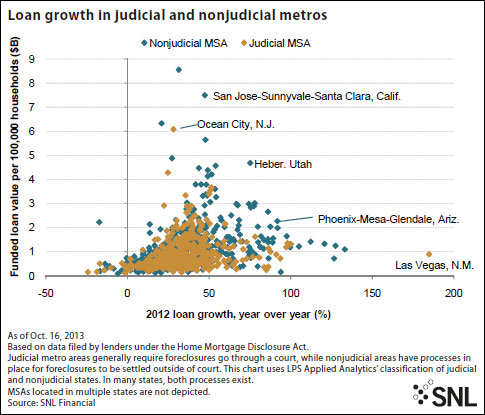 Where foreclosures move, where they don’t

More than six years since the subprime bubble burst and delinquency rates started to spike in 2007, the difference in foreclosure pipelines between judicial and nonjudicial states has been stark. With the judicial process often putting the lender's ability to foreclose in the hands of a judge, the bloated foreclosure pipelines have taken much longer to clear. In the most recent detailed mortgage report from LPS Applied Analytics, showing data through the end of August, seven of the top 10 states by noncurrent rates were judicial states.

And those trends are likely to become more evident as judicial states face a long road, and the pipeline appears to be growing. In an August report detailing the state of distressed non-agency residential mortgage backed securities as of the second quarter, analysts at Morningstar reported that it would take a full 41 months to clear the nation's distressed inventory at current disposition rates. That figure was worse than the first quarter by one month and three months higher than the prior-year period.

But lenders do not appear to be dinging states that make foreclosure more difficult. New Jersey and New York have far and away the longest pipelines, with New York leading all states in the first quarter with 235 months to clear its pipeline.

The latest RealtyTrac report, released Oct. 10, confirmed the trend. The agency reported the average time to foreclose in both states exceeded 1,000 days, compared to the national average of 551 days.

Joshua Stein, a real estate lawyer in New York City, told SNL that the borough of Brooklyn is particularly notorious for delaying foreclosures.

"The reputation out in the market is that the Brooklyn courts will do everything they possibly can to delay and prevent foreclosures," Stein said, later adding: "And if you have a judicial environment that's totally harmful to foreclosures, I don't know why anybody should be doing residential real estate financing in that borough because if you can't foreclose, you can't lend."

But, Stein acknowledged, lenders still do make loans in Brooklyn and securitizations appear to have little problem including loans from Kings County, which constitutes the borough. Indeed, the HMDA data show lenders issued $8.84 billion worth of loans in the county in 2012, up 21.88% from the previous year.